Washington’s Blog strives to provide real-time, well-researched and actionable information.  George – the head writer at Washington’s Blog – is a busy professional and a former adjunct professor.

A United Nations forecast of the possible movement of the radioactive plume coming from crippled Japanese reactors shows it churning across the Pacific and touching the Aleutian Islands on Thursday before hitting Southern California late Friday.

The projection, by the Comprehensive Test Ban Treaty Organization, an arm of the United Nations in Vienna, gives no information about actual radiation levels but only shows how a radioactive plume would probably move and disperse.

The forecast, calculated Tuesday, is based on patterns of Pacific winds at that time and the predicted path is likely to change as weather patterns shift.

The Japan forecast shows that the radioactive plume will probably miss the agency’s monitoring stations at Midway and in the Hawaiian Islands but is likely to be detected in the Aleutians and at a monitoring station in Sacramento.The forecast assumes that radioactivity in Japan is released continuously and forms a rising plume. It ends with the plume heading into Southern California and the American Southwest, including Nevada, Utah and Arizona. The plume would have continued eastward if the United Nations scientists had run the projection forward.

The Times provides a series of images to illustrate the projected path of radiation, ending with this one: 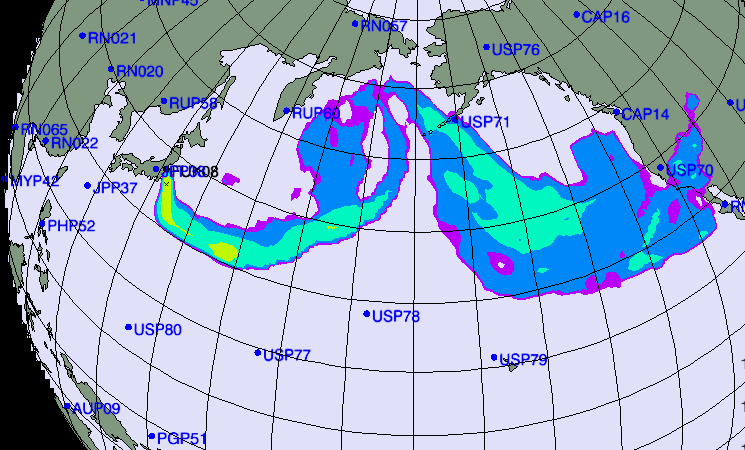 Similarly, Yoichi Shimatsu – former editor of the Japan Times Weekly, who led the field research for an architectural report on structural design flaws that led to the tsunami death toll in Thailand – wrote a couple of days ago:

The Pacific jetstream is currently flowing due east directly toward the United States. In the event of a major meltdown and continuous large-volume radioactive release, airborne particles will be carried across the ocean in bands that will cross over the southern halves of Oregon, Montana and Idaho, all of California, Nevada, Utah, Colorado, Wyoming, the Dakotas, northern Nebraska and Iowa and ending in Wisconsin and Illinois, with possible further eastward drift depending on surface wind direction.

The timeline of the UN’s forecast is suprising, given that the earthquake hit on March 11th, and Accuweather formerly estimated the following times for radiation – in a worst-case scenario – to reach the West Coast:

Calculated time for radioactive particles to cross the Pacific from the power plants in Japan to big West Coast cities if the particles take a direct path and move at a speed of 20 mph:

But it is vital to note that many experts are saying that only extremely low levels of radiation will hit Americans. As the New York Times reports:

Health and nuclear experts emphasize that radiation in the plume will be diluted as it travels and, at worst, would have extremely minor health consequences in the United States, even if hints of it are ultimately detectable. In a similar way, radiation from the Chernobyl disaster in 1986 spread around the globe and reached the West Coast of the United States in 10 days, its levels measurable but minuscule.

On Sunday, the United States Nuclear Regulatory Commission said it expected that no “harmful levels of radioactivity” would travel from Japan to the United States “given the thousands of miles between the two countries.”

On Wednesday, the agency declined to release its Japanese forecast, which The New York Times obtained from other sources. The forecast was distributed widely to the agency’s member states.

The chairman of the Nuclear Regulatory Commission, Gregory B. Jaczko, said Monday that the plume posed no danger to the United States. “You just aren’t going to have any radiological material that, by the time it traveled those large distances, could present any risk to the American public,” he said in a White House briefing.

In Germany on Wednesday, the Federal Office for Radiation Protection held a news conference that described the threat from the Japanese plume as trifling and said there was no need for people to take iodine tablets.

It is also important to remember that this is likely not just a one-day freak-out kind of event. As the Times previously noted:

Experts in Japan and the United States say the country is now facing a cascade of accumulating problems that suggest that radioactive releases of steam from the crippled plants could go on for weeks or even months.

And keep in mind that iodide only protects against one particular radioactive element: radioactive iodine, technically known as iodine-131. Iodine-131 has a half life of only 8.02 days. That means that the iodine loses half of its radioactivity within 8 days.

In contrast, plutonium has a half life of up to 80 million years, and is one of the most hazardous substances in the world. Fukushima reactor number 3 burned a plutonium-uranium mix, and has lost containment.

However, as NPR points out:

Although plutonium is a long-lived emitter of radiation, it is also quite heavy, so it is not likely to move very far downwind from its source.

Therefore, Americans will likely not be exposed to any plutonium.

Other possible radioactive elements from Japan include some elements – like radioactive nitrogen (with a half life of seven seconds) – decay so quickly that they could not possibly make it to the U.S. in radioactive form.

The New York Times noted last week that – in addition to iodine-131, the big danger is cesium:

Over the long term, the big threat to human health is cesium-137, which has a half-life of 30 years.

At that rate of disintegration, John Emsley wrote in “Nature’s Building Blocks” (Oxford, 2001), “it takes over 200 years to reduce it to 1 percent of its former level.”

It is cesium-137 that still contaminates much of the land in Ukraine around the Chernobyl reactor.

Cesium-137 mixes easily with water and is chemically similar to potassium. It thus mimics how potassium gets metabolized in the body and can enter through many foods, including milk.

The Environmental Protection Agency says that … once dispersed in the environment … cesium-137 “is impossible to avoid.”

Cesium-137 is light enough to be carried by the wind a substantial distance.

But this is still largely conjecture, as neither the government or private sector scientists have yet publicly disclosed the exact radioactive elements headed towards the U.S.

Again, the important thing is whether a little or a lot of radiation makes it to America. If only a little bit, it’s no big deal. We’ve all had x-rays, eaten bananas (which – believe it or not – contain radioactive potassium-40), and been exposed to other forms of low=level radiation. Indeed, the Times notes we’ve all been exposed to some cesium-137 our whole lives:

The Environmental Protection Agency says that everyone in the United States is exposed to very small amounts of cesium-137 in soil and water because of atmospheric fallout from the nuclear detonations of the cold war.