Today, BP and the Coast Guard attributed the new oil sheen to a leak from the “cofferdam”.

We will give some background on what the cofferdam is, and then explain why the case is not closed … and an ongoing investigation is needed to determine whether or not the well has really stopped leaking.

The Equipment Everyone Is Discussing

The cofferdam is a container which BP tried to lower over the oil gusher in 2010.

Here is the way it was supposed to work:

The cofferdam was built in Port Fourchon, Louisiana: 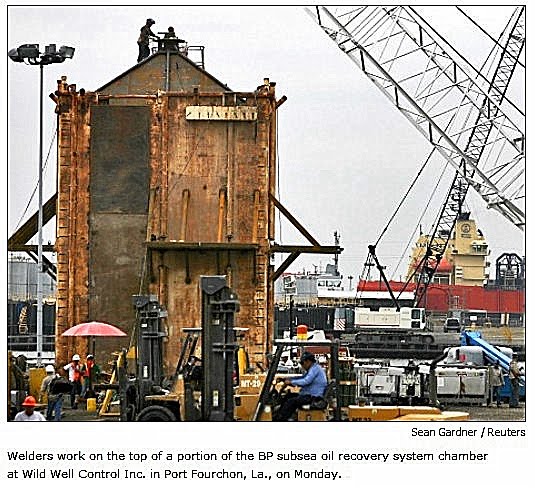 It was then shipped to the site of the spill and lowered into the ocean: But it didn’t work.  The cofferdam leaked, because methane gushing out of the stricken well quickly built up, clogged up the cofferdam, and made it float: BP’s … Cofferdam Operation, a 98-ton steel and concrete containment chamber lowered on top of the damaged pipe that connected the drilling rig to the oil well. The chamber took two weeks to build. In theory, the 40-foot-tall chamber was supposed to capture oil and allow it to flow through a pipe to a barge on the surface. But the Gulf Oil Disaster Recovery Group reported on Saturday that the operation failed–ice crystals formed inside the container, clogging the pipe that was supposed to bring oil to the barge.

After the cofferdam was lowered over the leak nearly a mile below the surface, it had to be raised and moved 200 meters to the side.   BP engineers then gave up on the cofferdam, tried the smaller “top hat” containment dome (which also failed because it got plugged up with methane hydrate crystals), and then moved onto the “junk shot” and “top kill” approaches to capping the well.

Any Oil from the Cofferdam Should Have Been Degraded By Now

The key statement in the BP discussion was the fact that oil recovered on the ocean surface was not biodegraded. This is not consistent with a pool of oil supposedly trapped in the wreckage of the riser, which would have been exposed to ambient bacterial activity for over two years.

When the cofferdam was moved, the oil would have mixed thoroughly with sea water … and the oil-eating bacteria in it.   Indeed, given the large holes in the cofferdam shaped to fit the leaking riser pipes (as shown in the photographs above), and the failure to maintain the the cofferdam, it has most likely not been water tight for the last 2 years – even sitting directly on the seafloor.

With the information that has been released, I remain skeptical that they have found ‘the source’ for the continuing leak(s).

The cofferdam has a limited ‘supply’ … which has already been exposed for a very long period of time to the seafloor environment … including several hurricanes.  Thus, it is difficult to understand why it would start leaking recently … and continue to leak.

The search needs to be conducted like an archeological dig [using] a close-spaced grid of multiple surveys employing different detection equipment with accurate control of positions of the ‘sensors’.

When I worked for Shell on the Bay Marchand blowouts, we used geophysical ‘sniffer’ equipment to trace the oil in the water column….better than an ROV…..with the survey from the sea floor to the surface… from Bay Marchand to the Bay of Campechee.

A REAL, Thorough Investigation of the Seafloor Is A Vital Matter for America

Bea has repeatedly stated that BP’s oil disaster could very well have enlarged nearby oil seeps or even fractured the seabed, allowing a path for oil to make it into the ocean (and see this).

Another expert warned right after the well was capped in 2010 that capping the well could have unintended consequences:

Bill Gale, a California engineer and industrial explosion expert who is a member of the Deepwater Horizon Study Group [formerly Chief Loss Prevention Engineer for Bechtel in San Francisco], said… that gas hydrate crystals could be plugging any holes in the underground portion of the well, and they could get dislodged as pressure builds.

In other words, there may have been a destruction of a portion of the steel well casing which was temporarily plugged by methane crystals. Leaving the well cap may slowly raise the pressure in the well to the point where the hydrate crystals are dislodged, in which case the well might really start leaking.

Although even less likely, scientists say that the methane could disturb the seafloor itself. As the St. Peterburg Times points out:

Disturbing those [methane hydrate] deposits — say, by drilling an oil well through them — can turn that solid methane into a liquid, leaving the ocean floor unstable, explained [Carol Lutken of the University of Mississippi, which is part of a consortium with SRI which has been conducting methane research in the Gulf of Mexico for years].

No wonder Congressmen Markey and Waxman have demanded that BP survey the seafloor near the site of the leaking oil well to determine whether there is new damage.

But BP has – apparently – refused to comply with their demand.

Because BP is struggling to wrap up a favorable settlement of lawsuits against it, the company is very motivated to sweep any problems under the rug.