I know that being a Debbie Downer gets more face time on cable news, but after looking at the Fed’s latest Financial Accounts of the U.S. report, formerly known as the Flow-of-Funds report, I cannot contain my optimism about the economy’s prospects in the New Year. First and foremost, the report shows that combined Fed and depository institution credit creation is not only accelerating, but is growing at a relatively high rate. Secondly, household balance sheets continue to improve, which implies that depository institutions will be more favorably disposed to lend in 2014. Thirdly, part of improvement to household balance sheets is related to the upward trend in the value of residential real estate. Fourthly, the reduction in federal government spending/borrowing is resulting in “crowding in” of spending/borrowing by other sectors. Thus, the wringing of hands and the gnashing of teeth by unreconstructed Keynesians (i.e., The Consensus) over the deleterious effect of budget sequestration on the pace of economic activity is not occurring. And lastly, federal government borrowing relative to the size of the economy is less than its post-WWII median value. 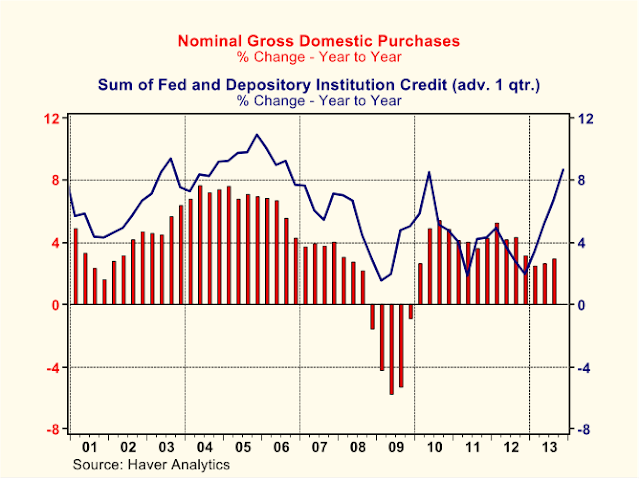 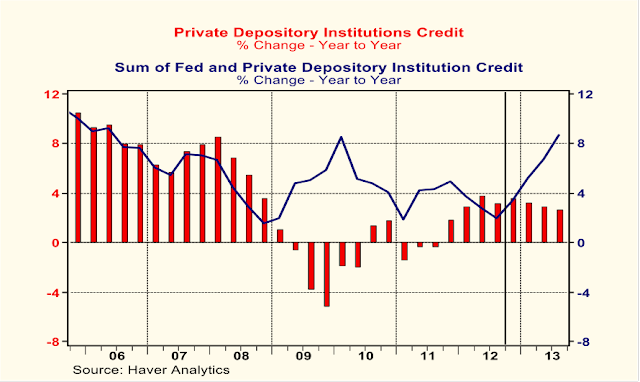 Which brings us to the balance sheet for households. Plotted in Chart 4 are quarterly observations of total liabilities of households and nonprofit organizations as a percent of their total assets. This ratio reached a post-WWII record high of 20.2% in Q1:2009. As of Q3:2013, this ratio had declined 520 basis points to 15.0%, the lowest since Q2:2001. This sharp decline in household leverage in combination with the sharp decline in the debt burden of households (see Chart 5) should make households appear more creditworthy in the eyes of depository-institution lenders. 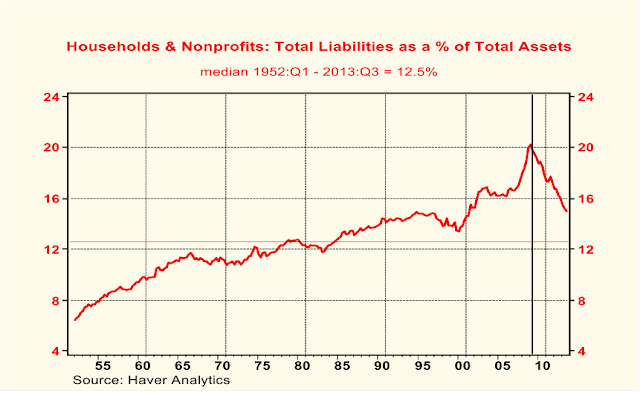 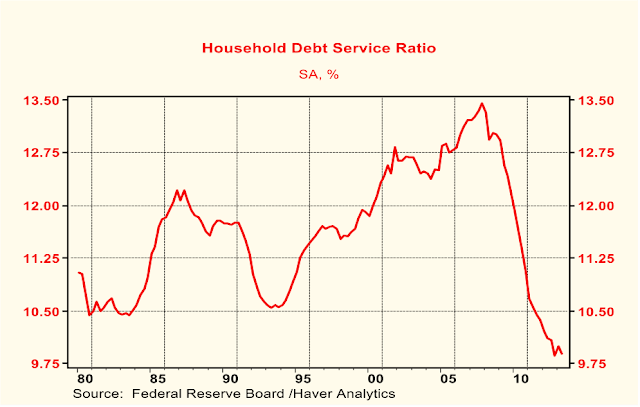 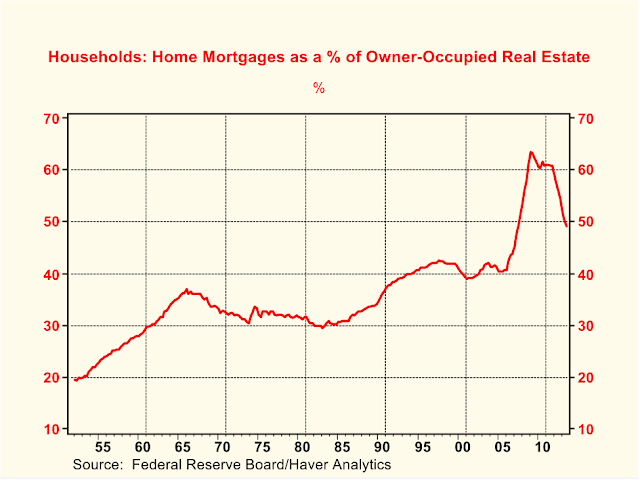 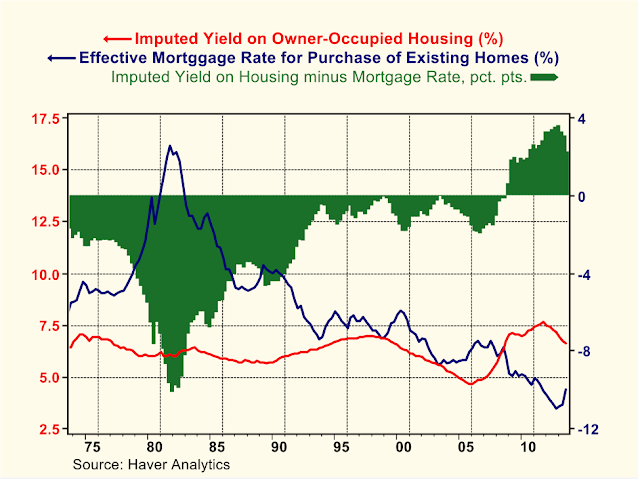 This is shown in Chart 8. Notice that as federal government net borrowing decreased precipitously in the second and third quarters of 2013, net lending by the remaining entities in the nonfinancial sectors also fell precipitously. Conversely, as federal borrowing surged in 2009, in part due to the fiscal stimulus, nonfinancial sector net lending also surged. This is an example of “crowding out”. In analyzing the macroeconomic effects of changes in fiscal policy, it is a good idea to “follow the money”. The funds have to come from somewhere to finance an increase in government expenditures and/or a decrease in taxes. Unless there is a net increase credit created by the Fed and the depository institution system, i.e., unless there is a net increase in thin-air credit, it is likely that the funds will come from the nonfinancial sector, which means that the stimulus to demand emanating from the government sector will crowd out spending that otherwise would have emanated from other nonfinancial sectors. And when government spending is cut and/or taxes increased, the fiscal drag on spending emanating from the government sector will crowd in spending from other nonfinancial sectors. Think of the extra money that otherwise would have gone to purchase government bonds “burning a hole” in the pockets of the otherwise lenders. 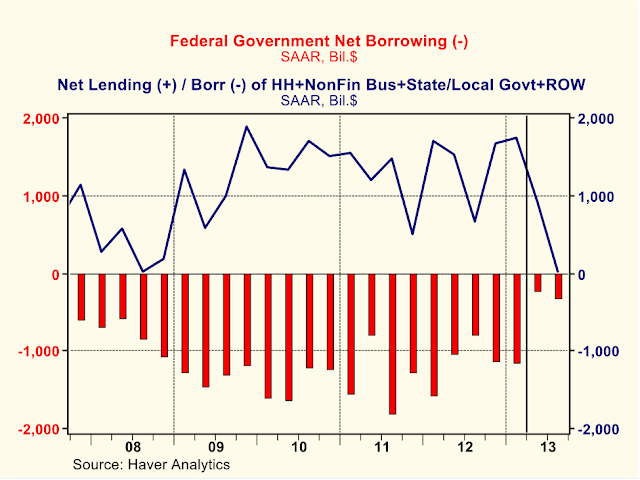 Lastly, for all you fiscal hawks out there, Chart 9 should make you jolly. Plotted in Chart 9 are quarterly observations of seasonally adjusted at annual rates (SAAR) net lending / net borrowing by the federal government (obtained from the Fed’s Financial Accounts report) as a percent of SAAR nominal GDP. The median percentage from Q1:1953 through Q3:2013 is minus 3.2%. In the second and third quarters of 2013, this ratio was minus 1.3% and minus 1.9%, respectively. With some help from the Fed in getting thin-air credit back up to a more normal post-WII growth rate in order to stimulate nominal GDP, some restraint in federal government spending along with some tax increases and voilá! the federal government deficit relative to the size of the US economy looks quite reasonable in an historic context. 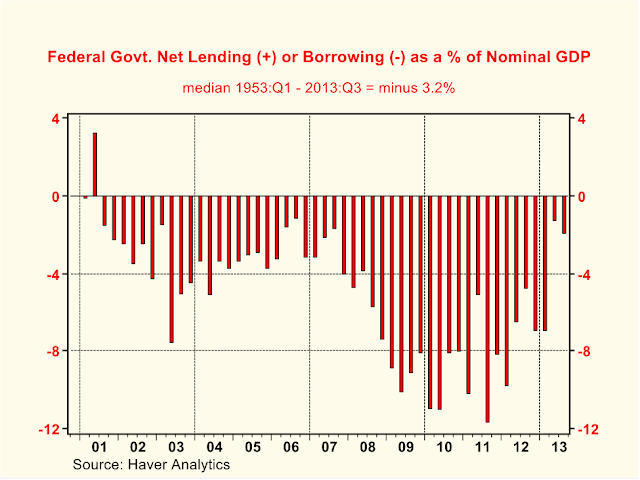 I hope to send out my airing-of-grievances Festivus letter next week. I have a lot of problems with you people!