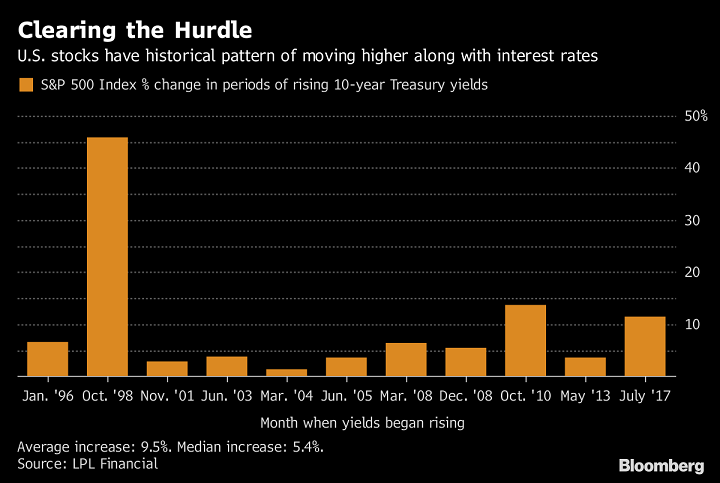 Here is John Lynch and Ryan Detrick, via Dave Wilson:

With yields surging around the globe, breaking out to multi-year highs in several cases, many think that higher rates are a bad thing. The data suggest quite the opposite. We have found that stocks and bond yields historically have been positively correlated until the 10-year yield gets up around 5%, at which point the correlations break down. In other words, it is perfectly normal for yields to rise along with stocks.

Taking this a step further, the chart above shows that out of the most recent 23 periods of higher rates (based on the 10-year Treasury yield), stocks have gained ground 19 of those times. Recent periods have produced even better performance, as stocks have risen during each of the last 11 periods of rising rates (since 1996). Stocks have done well since interest rates began to move higher in September 2017. History suggests that higher rates may actually be a good thing, and should the 10-year Treasury yield break above the psychologically important 3% level, the equity bull market may garner further support.

Don’t mistake my views for complacency: rising rates from higher levels when inflation is greater is a huge problem for stocks. But at these levels, it is totally manageable.