Trump Models U.S. Economy on Kansas. That’s a Mistake
The better choice is one of his favorite whipping boys, California, which has a balanced budget, rapid growth and industries of the future.
Bloomberg, October 19, 2018

If you had to choose one state out of the 50 to use as a blueprint for America’s future growth plan, which state would you select?

Let’s add a wrinkle. There are two choices, Kansas or California, which my Bloomberg Opinion colleague Matthew Winkler wrote about the other day

Would you select the coastal tech and entertainment giant or the heartland agriculture and industrial producer?

It’s a no-brainer. Kansas has been a disaster, with giant budget shortfalls, service cuts, slashed education budgets and a brain drain with young people leaving the state. The economy has failed to keep up with growth in the rest of the country and is much weaker in terms of job gains, wage increases and gross domestic product growth than neighboring states with similar economies. In 2015, for example, Kansas had one of the worst job growth rates in the country, at 0.8 percent, adding just 10,900 nonfarm jobs.

In the five years before Donald Trump was elected president in 2016, no state economy performed worse than Kansas. Things became so bad that Kansas decided to simply stop updating the public about state economic news. There’s no reason to do this other than to obscure the obvious: Kansas’s wounds were self-inflicted.

Compare that record with California’s robust economy, increased tax base, balanced budget and job growth that exceeds the national average. The president may criticize the politics of the state, but there is little to find fault with its economy. If California were its own country, its $2.75 trillion economy and would be the world’s fifth largest, after the U.S., China, Japan and Germany.

Yet despite the obvious failures in Kansas, Trump has championed that state, and not California, as his preferred model for economic growth via big tax cuts and deregulation.

But here is the thing: If the Kansas economic formula were applied to California, you have to wonder if the state would be as well off as it is. Between the two states, only one has a minimum wage law that’s higher than the federal $7.25 an hour (it’s $11 now and going to $15). One has environment rules, including for automobiles sold in the state, that exceed federal standards. Only one has made a goal of social inclusiveness, welcoming immigrants and their entrepreneurial energy. Just in terms of job growth, there’s really no comparison: 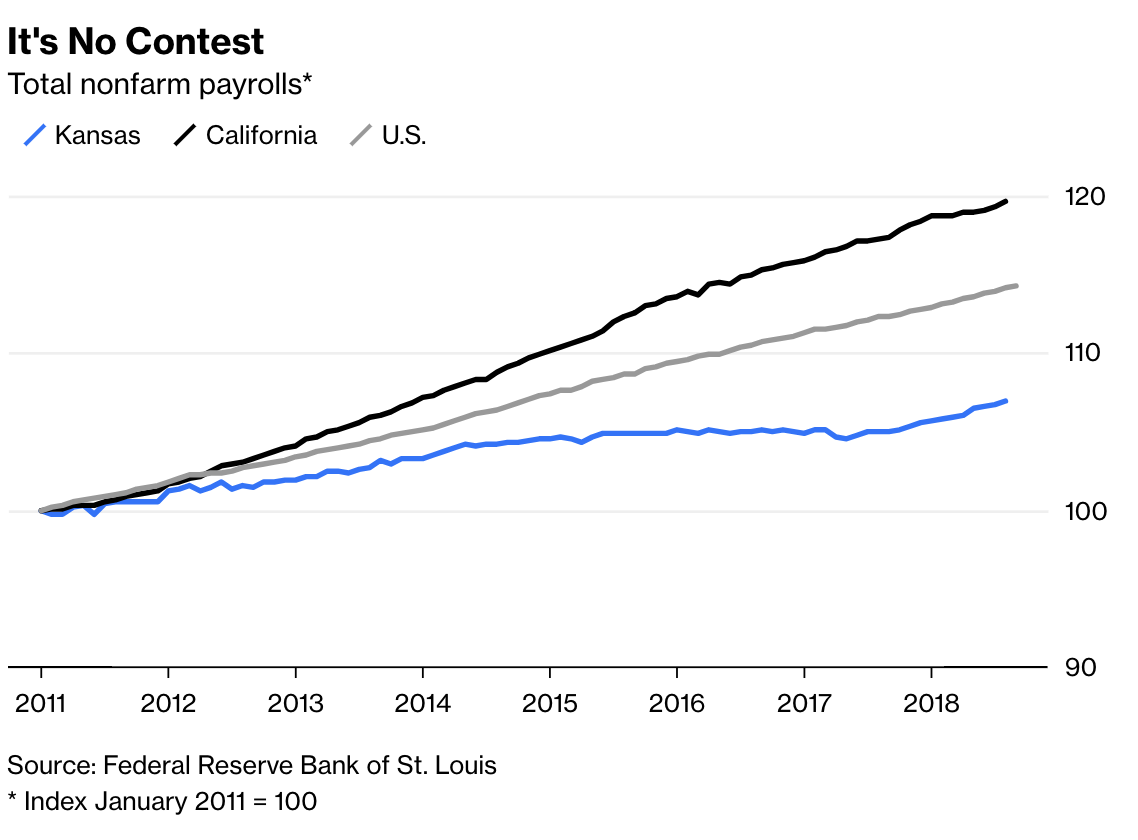 Between the two, there’s really no choice.

Still, in the face of the evidence, Trump has championed the Kansas model of deregulation, tax cuts and antipathy to immigrants. Indeed, the president finds much to dislike about the Californication of America, though as one might expect, his criticisms aren’t well-grounded in facts. He has inaccurately blamed California wildfires on regulations that he seems to think divert water from fire fighters. He has complained about its high taxes,1 calling them “way, way out of whack,” and said the state’s approach to immigrantion “put the safety and security of our entire nation at risk.” Beyond that, Trump wants to end the state’s policy of requiring fuel efficiency and pollution standards for automobiles that exceed federal rules. The state has fought back by taking Trump to court.

California is far from perfect, but you can’t deny the success of its economy. Ignoring this reality, Trump has instead embraced what we might call Kansasification of America. Taking a page out of former Governor Sam Brownback‘s playbook, the U.S under Trump has put into place the same sorts of tax and regulatory incentives that Kansas did circa 2012.

Although the U.S. economy in the ninth year of expansion is in decent shape, troubling signs are emerging as a result of Trump’s policies. The federal deficit rose 17 percent from last year, jumping to $779 billion, the highest level since 2012, when the U.S. was still putting the Great Recession behind it. The Congressional Budget Office has forecast a deficit of more than $1 trillion in fiscal 2019, much of it the result of revenue shortfallsbecause of Republican tax cuts. Yes, spending grew 3.2 percent, but revenue rose just 0.4 percent and by U.S. Treasury Department estimates would have been $200 billion more without the tax cuts. Stan Collender, the long-time government budget expert and author of “The Guide to the Federal Budget,” says this red ink is remarkable given the state of the growing U.S. economy. Normally, the budget deficit would be shrinking when the economy is expanding.

Trump wants more tax cuts, which would only dig a deeper debt hole. The CBO projects the federal debt will reach 100 percent of GDP by 2028. Despite the promises, the Trump tax cuts are not paying for themselves, much less “paying down the national debt,” as Treasury Secretary Steven Mnuchin promised they would. Sometimes taking on debt makes sense, especially when used to counter an economic slowdown or pay for things like infrastructure. Tax cuts that do neither and are tilted to advantage the already well-off are likely to limit the nation’s ability to cope with future recessions and make needed investments.

But back to California and Kansas: Is the comparison between the states fair?

California has several inherent advantages: a robust and fast-growing technology industry that attracts lots of skilled workers and a first-rate university system. Silicon Valley has been a huge economic driver for three decades, as the world center of venture capital and technology. The weather and geography also help.2

Kansas, meanwhile, has some inherent disadvantage in its dependence on agriculture, which has been shedding jobs for decades, and manufacturing, another sector with long-term job losses.

Still, there are obvious lessons to be learned. When Jerry Brown retires as governor next year, part of his legacy will be leaving the state with a $6.1 billion budget surplus. Kansas, meanwhile, is trying to dig itself out from the deficits that are a consequence of tax cuts — cuts that the state legislature has since reversed.

Between the two, there’s really no choice.  Take Calfornia.

__________
1. Even as the Trump Organization got sweetheart deals from cities in the state for development deals.

2. Its not quite a black and white comparison. Proposition 13 (People’s Initiative to Limit Property Taxation) has kept California’s real estate taxes low, as it restricts annual increases of assessed value of real property to 2 percent per year. That is not very “People’s Republic of California.”

I originally published this at Bloomberg, October 19, 2018. All of my Bloomberg columns can be found here and here.

BBRG: Never Ask an Inflation Hawk to Do a Dove’s Job