The world’s first financial advisor is Joseph, son of Jacob. He is doing asset management for the Egyptian Pharaoh and he also kind of invents the very first national pension system.

Pharaoh’s assets are the lands themselves and the agricultural crop that can be produced from them. He is having nightmares about seven fat cows and then seven lean cows. Jacob, a prisoner at first, interprets these dreams to mean that seven bountiful years are coming but they will be followed by seven years of famine and pain. 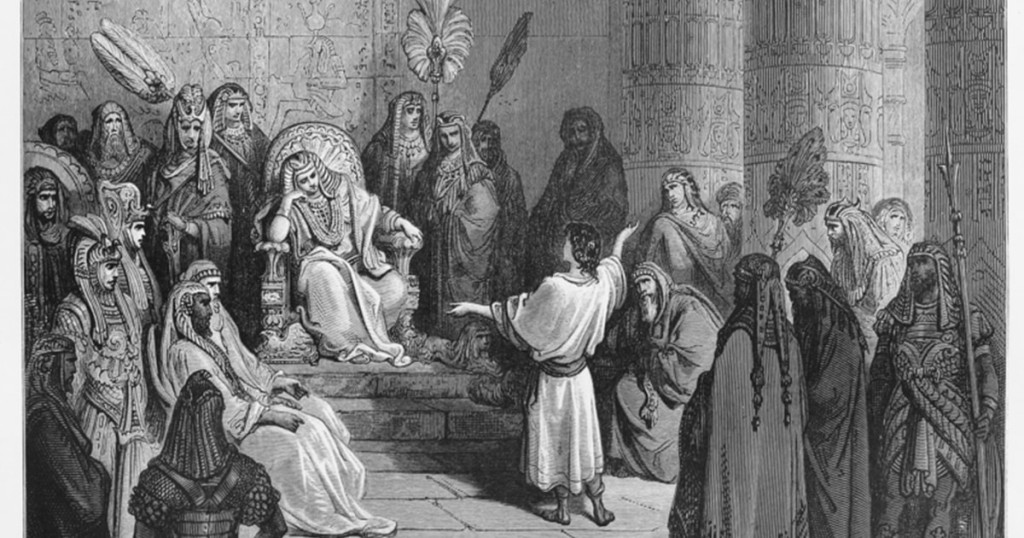 Pharaoh appoints him as his financial advisor and allows him to commandeer a fifth of every Egyptian farmer’s harvest to comprise an emergency store of grain. When the famine begins, Pharaoh’s got the resources saved up to continue feeding his people, sort of like social security for citizens who are no longer able to earn a living. Joseph is paid in return for his advice to the ruler and his country – the Pharaoh tells him to send for his entire family and tribe of Jews from Canaan and to bring them to Egypt to settle a portion of its farm land.

Joseph guided the Pharaoh’s portfolio and saved his assets from ruin. In exchange for his crucial advice, he was paid an asset-based fee – a portion of the farmland.

As of August 1st, my firm’s tactical asset allocation portfolio, called Goaltender, has been 100% invested in US stocks for 25 straight months without interruption. Let me repeat that. This particular strategy has now gone 25 straight months of being 100% long US stocks. We take zero credit for having seen the any of the recent bull market coming in advance, as Goaltender is entirely rules-based and our own feelings do not enter into its allocation decisions.

We almost never discuss our tactical asset allocation strategies publicly (two rare exceptions here and here) and even in this case I won’t be (can’t be) getting into any details. But there’s a bigger point I want to make here…

How many other tactical strategies out there have been fully invested in US stocks since July of 2016 without any hedges or sales or “swings to cash” during that period?

How many investors would have run a strategy like this for themselves and stuck with it the entire time?

How many professionals can set up a rules-based strategy and then actually stick with it without making tweaks and changes.

How many tactical strategies were built from the premise of “how can we trade the absolute least amount of times each year and almost never do anything, yet still be considered tactical?”

Goaltender is the only tactical strategy I’m aware of that was built internally at a wealth management firm with the express purpose of managing investor behavior rather than trying to outsmart the markets, generate alpha or call tops and bottoms. Almost every tactical strategy we’ve seen in the wild is oriented toward impressing people, beating markets, making rapid moves and incorporating economic data, sentiment surveys, fundamentals and other bulls*** that doesn’t actually work.

Ours is designed to make the trade that clients can’t, at the moment they can’t. The trades they won’t make themselves. If we called clients a week after Brexit at the beginning of July 2016, with the controversial US election looming just a few months ahead, and said “We want you to go 100% long US stocks right here, right now, and hold them for the next two years straight, no questions asked,” the response would not have been great. Which is why we are discretionary managers, running these strategies ourselves.

There are several reasons why financial advisors overwhelmingly charge clients for their services as a basis point fee on assets as opposed to hourly or on a monthly retainer.

One of the major reasons is that, at the end of the day, the financial advisor is going to be held responsible for what happens with the client’s invested assets, regardless of whether or not the value-add on an ongoing basis is perceived to be the asset management or the financial planning work.

It’s also possible to say that during 300 days a year it’s the planning work that is worth the most to the client but during the other 65 days a year, it’s the asset management that’s going to make the difference. We don’t know in advance which days will be the 300 and which will be the 65. The thing is, what goes on during those 65 days might have tremendous implications for the financial plan – positive or negative.

You may as well be paid for it.

As a financial advisor, you will own the asset allocation more than anything else, even if the personal relationship and the planning piece is a lot more meaningful than the fund selection.

This is regardless of what kind of people your clients are, what region of the country you serve, which type of firm you work at. That’s also your biggest risk – that someone is furious about how their assets have been allocated. Shouldn’t everyone in every profession be paid based on the thing that is their biggest risk? Why would a client want it otherwise? They’re handing you their money to invest in the portfolio that you recommend. If you do a bad job, they’re taking the money out of the portfolio you recommend. You have skin in the game now, in a way a retainer fee simply doesn’t capture. This is actually what clients want. The best evidence of that is the incredible shift in investable assets away from almost every other channel of wealth management directed straight into the RIA channel.

There are now 18,800 retail-focused (Registered Investment Advisory) RIA firms in America. 687 of them manage over a billion dollars and account for 60% of the industry’s total assets under management. These firms are the future. Trillions of dollars have moved to the RIA space. None of it at gunpoint, that I’m aware of.

People are voting with their dollars and their vote is for asset based fees in exchange for a relationship with a financial advisor who manages their portfolio.

I didn’t make it this way, I’m just telling you how it works in the real world. I’m sorry if this doesn’t align with how you feel it should be or what logic would dictate. Twenty one years in the game, my friends. When I see a reporter or a columnist opine on the compensation structure of financial advisors, I read it with an open mind. Perhaps there’s some merit to what they’re saying in some cases.

But then I remember that a true financial advisor doesn’t really earn their fees until the big moment. That moment where a client wants to double their exposure to technology stocks after a 500% rally they feel they didn’t get enough out of. That moment where someone with a thirty year retirement ahead of them is about to succumb to volatility and liquidate a stock portfolio after 8 months of a bear market. That moment where a client wants to shift to an all US stock portfolio precisely as international stocks are on the verge of going on a five year stretch of massive outperformance. That moment when a client is tempted to put five percent of their net worth into Bitcoin at $18,000 per…whatever, coin I guess?

And when these moments happen, the advice they get at that time is not simply worth a basis point fee. It’s worth everything. It could be worth a lifetime’s sanity every day thereafter. I’ve seen decisions made and consequences suffered the likes of which you couldn’t imagine. Between 2010 and 2015, we would come across at least one or two investors a week who had been miserably sitting in cash since 2008 and didn’t know what to do. None of these cases involved a client who had an advisor currently working with them. Hundreds of thousands of dollars in foregone gains (in some cases millions) had been left on the table due directly to the absence of professional help.

For those who have never been on the phone with a client – a human being – whose liquid assets and entire life savings are in a twenty percent drawdown, alarm bells ringing throughout the media and blood-red stock quotes everywhere they look, you really have no idea what fee is worth what amount, to whom, and why. If you’ve never sat with someone who is so utterly convinced that their family’s future and their freedom is slipping away before their very eyes, you probably don’t need to have a strong opinion about what they should or should not be willing to pay for help.

And for those who don’t understand why the financial planning work and the asset management work that advisors do are inextricably linked – why they are not merely a la carte items on a buffet’s steamer table, ready to be unbundled and consumed separately, in any particular order – I don’t know what to tell you.

I’m not sure how you can invest someone’s entire life savings without understanding how and when the money is ultimately going to be used. I’m not sure how you can construct a financial plan for someone and then act as though the way they reach their goals via the investment markets is somehow less relevant or worthy of attention.

Financial planning in the absence of an investment strategy designed to implement the plan is a f***ing fortune cookie. An investment portfolio absent the dictates of the goals from a financial plan is like building a house without a blueprint. Neither or these things is worth much without the other. But delivered in concert, they are essential and worthy of a fee for the people who are going to be overseeing both.

We don’t take requests. We’re not the wedding DJ.

People come to us and tell us what they want (or what they think they want) and it’s our job to show them what they actually need instead. If we’re talking to someone rational and intelligent, they get it immediately.

They’re relieved to be told what they should be doing rather than being presented with a menu of options. They’re excited about a future in which they can tune out virtually everything and focus solely on spending the money they’ve saved based on what’s important to them. They like having their financial information organized and presented in a way that illustrates possibilities and priorities. They like the peace of mind knowing that they’re making ongoing decisions in consultation with an advisor who understands their personalities, their spending needs, their tax situation, insurance coverage, estate plan and their future hopes and dreams. They also like having someone else be partly responsible for the burdens of investing large sums of money on behalf of other members of their family. The planning and the investing functions are integral to all of this value being created and enjoyed.

This is why the wealthiest, most successful people in America are working with wealth management firms and paying an asset based fee. It’s why they always have and they always will. Gladly.

Talk to us about portfolio and financial plan here.

This post was originally published on August 9, 2018. at The Reformed Broker