Fox News Shares the Blame for Trump’s Deranged, Ruinous Presidency
A new book details how the president and his state media partners cash in on their symbiotic relationship while driving the country toward disaster.
Bruce Bartlett, TNR. September 7, 2020

Throughout history, presidents have singled out particular reporters for special access. Franklin Roosevelt often favored The New York Times’ Arthur Krock with inside information. John F. Kennedy’s close personal relationship with Washington Post editor Ben Bradlee is documented in Bradlee’s book, Conversations With Kennedy. It’s an arrangement that suits both parties—reporters get scoops, while presidents get to put their spin on the news in a relatively unfiltered form.

Donald Trump, however, has gone far beyond past practices to favor an entire news organization, Fox News. In return, Fox gives Trump fawning, obsequious coverage, according to a new book, Hoax: Donald Trump, Fox News, and the Dangerous Distortion of the Truth, by CNN’s media analyst Brian Stelter. In great detail, he shows how access to Trump can make or break careers at Fox, with millions upon millions of dollars in ratings-driven compensation at stake.

Sean Hannity, whose 9:00 p.m. Fox show is the network’s highest rated, is the unquestioned leader of the pack when it comes to Trump sycophancy. Trump virtually dictates Hannity’s programming, and Hannity has little choice but to comply. In return, Hannity gets interviews with Trump almost on demand, and is a close private adviser to Trump off the air as well.

But the most influential show is Fox & Friends, which runs from 6:00 am to 9:00 am Eastern time. That’s because Trump is an early riser and a television junkie who gets the bulk of his information about everything from cable news. In lieu of briefings from his advisers or even reports in daily newspapers, Trump relies heavily on oral downloads of dubiously sourced information from Brian Kilmeade, Ainsley Earhardt, and Steve Doocy, the morning show’s three co-anchors. They often establish Trump’s priorities, his interests, and take on the news of the day, as evidenced by his frequent early morning tweets that regularly follow Fox & Friends commentary in real time.

Stelter reports that Trump administration officials must beg for interviews on Fox & Friends just so Trump will see them and in the process get briefed on some subject for which he’s otherwise too preoccupied to reserve office time. Corporations have also learned about Trump’s addiction to the show and exploit it by buying advertising in its time slot. (Unfortunately for them, Trump likes to watch Fox & Friends on delay so he can fast forward through commercials.)

Stelter shows that in many ways Fox & Friends created Trump, the politician, out of whole cloth. For decades, he showed no special interest in politics and was only concerned with self-promotion and making money. But in 2012, Fox News president Roger Ailes suggested that he do a weekly interview on Fox & Friends to discuss politics. He didn’t even have to drive the couple of blocks from Trump Tower to the Fox studio; he could literally just phone it in.

As the same time, Fox & Friends tutored Trump on policy, since Trump himself was a blank slate with no knowledge of any major policy issue. As one of the show’s producers told Stelter, “People think he’s calling up Fox & Friends telling us what to say. Hell no. It’s the opposite. We tell him what to say.”

Trump’s White House advisers quickly learned to watch the show themselves in order to know what he was thinking. “The Fox morning show had supplanted the president’s daily intelligence briefing,” Stelter writes. “West Wing aides and lawmakers and lobbyists had to start watching the show so they could follow Trump’s tweets and orders.”

This created a feedback loop of Fox-branded disinformation. Fox producers carefully parse Trump’s tweets to set their own agenda for the day. Pleasing Trump is a high priority at the network—not only because it’s important in and of itself, as well as personally to Australian-born media mogul Rupert Murdoch who owns it, but also because Trump’s interests and perspectives dovetail perfectly with those of Fox’s audience. Pleasing Trump, therefore, is good for business, ratings, and one’s career at Fox.

The fanatic loyalty of Fox’s audience delivers some $2 billion per year of profits into the pockets of Murdoch and his family. The bulk of this comes not from advertising, but from fees paid by cable systems for the right to carry Fox News. Typically, these systems pay Fox two dollars per subscriber per month—well more than what CNN or MSNBC nets. (CNN earns less than one dollar per subscriber, MSCBC only 33 cents, according to Angelo Carusone of Media Matters for America.) And Fox knows that no cable system would dare drop Fox—that would result in the rapid loss of thousands of subscribers and a likely outbreak of picketing and demonstrations outside its offices.

This is why Fox retains controversial commentators such as Tucker Carlson, whose program consists largely of race-baiting and pandering to white supremacists. Carlson’s prime-time show has cost Fox millions of dollars in advertising due to corporate boycotts, but it’s also highly rated and a key reason why cable systems pay Fox’s exorbitant fees. That’s why Carlson can afford to lose 100 percent of his advertisers and still keep his show and the millions of dollars per year Fox pays him.

Stelter says that the historical model for TV news broadcasting has become reversed at Fox. Whereas a typical media outlet leads with hard news and buries commentary at the back of the paper or the end of a program, Fox leads with commentary and presents real news only as an afterthought. The network doesn’t even employ very many actual reporters; the bulk of “news” content at Fox comes from the internet, especially from right-wing sources like Breitbart. The Drudge Report, in particular, is very closely monitored for material. (This may have changed lately since Matt Drudge adopted a more Trump-skeptical perspective, causing Fox’s Carlson to declare him “a man of the progressive left,” which is blatant nonsense.)

Fox executives like to say that the daytime programming at Fox isn’t materially different from that of other cable news networks—it’s determined largely by breaking news. The really bad stuff appears on prime time shows that are clearly understood to be commentary. But Stelter says that the Trump-pandering mandate is bleeding more and more into daytime programming, which has become a sort of hybrid of news and commentary. This has become more pronounced since the departure of Shepard Smith, whose 3:00 p.m. show was an island of hard news and high journalistic standards in the Fox wasteland of right-wing misinformation and blather. (Smith has recently joined CNBC.)

Stelter goes into detail about the many high-level Trump regime officials who got their start on Fox. Kellyanne Conway first came to Trump’s attention there, as did Heather Nauert, who became a senior State Department State official and very nearly was Trump’s nominee for UN ambassador, and Monica Crowley, who is a senior Treasury Department official. Fox President Bill Shine, who replaced Ailes after he was fired over sexual harassment allegations, even joined the White House staff as communications director while still making $3.5 million per year from his Fox payout. At one point, Trump seriously considered appointing Fox’s legal analyst Andrew Napolitano to the Supreme Court. (Napolitano is now on the outs with Trump for questioning the legality of some of his policies, causing Fox to scale back his airtime.) Just last week, Trump hired controversial doctor Scott Atlas as a coronavirus adviser after he “caught Trump’s attention with a spate of Fox News appearances in recent months.”

Overall, the coverage of Trump by Fox is akin to the way a local newspaper or TV station covers home team sports. They know that their readers and viewers will not tolerate too much criticism unless it is obviously well intentioned. A positive attitude toward the home team is also essential for gaining interviews with players and access to team executives about trades, draft picks, and other newsworthy activities.

The difference is that when a team is losing and perpetually mismanaged, as is the case with Washington’s NFL team, fans expect the local media to hold the feet of coaches and owners to the fire. They want reporters and columnists to give voice to their frustration and try to bring about positive changes that will improve the team’s record.

This is where Fox fails its own audience, Trump, and the nation itself. Fox producers and executive could use the network’s position to educate and inform Trump and his followers about issues that are clearly over their heads, such as ways to deal with the pandemic and its economic consequences. Instead of just repeating the Trump line of the day, Fox could find serious conservative experts who would explain conservative approaches to national problems that don’t involve the alternative facts and crazy conspiracy theories favored by Trump. In other words, Fox could do for the nation what sports columnists do for the home team—offer constructive criticism, creative new ideas, and friendly analyses that can break through the cloistered boardroom consensus that top-level decision makers are apt to operate within.

Unfortunately, Fox doesn’t do this because its leadership is greedy and irresponsible. It’s only interested in one thing—maximum short-term profits. That means it will go right on pandering to Trump and his followers, looking the other way at racism and conspiracy theories, and basically ignoring everything that is taught in journalism school about fact-checking and journalistic ethics. When the history of this era is written, much of the blame for Trump’s screw-ups should be shared by Fox, which made him the disastrous president that he is today. 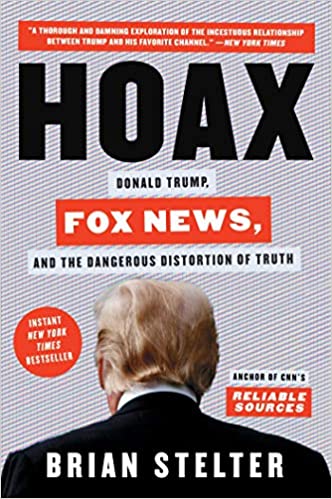