• Woodward book: Trump says he knew coronavirus was ‘deadly’ and worse than the flu while intentionally misleading Americans: National security adviser Robert C. O’Brien: “This will be the biggest national security threat you face in your presidency.” (Washington Post) see also The Coronavirus According to Donald Trump: A tick-tock of the President’s remarks over the last seven weeks as the COVID-19 viral disease outbreak grew into a pandemic. (The Bulwark)
• The Big Corporate Rescue and the America That’s Too Small to Save: Girish Patel doubts his small, 20-year-old shop will survive the pandemic economy. Thirty stories above, aerospace company TransDigm has sustained eye-popping profits thanks to steep layoffs and raised over a billion with help from the U.S. government. (ProPublica)
• Diseased Chicken for Dinner? The USDA Is Considering It A proposed new rule would allow poultry plants to process diseased chickens. That’s the last thing Americans need. (Bloomberg)
• How Big Oil Misled The Public Into Believing Plastic Would Be Recycled: NPR and PBS Frontline spent months digging into internal industry documents and interviewing top former officials. We found that the industry sold the public on an idea it knew wouldn’t work — that the majority of plastic could be, and would be, recycled — all while making billions of dollars selling the world new plastic. (NPR)
•  Everyone Knows It’s True: As Trump vehemently disputes reports that he has disparaged veterans, some silences speak loudly. (The Atlantic) see also The real scandal isn’t what Trump said about veterans. It’s what he did to them. While the political media obsesses about what Trump privately said about veterans two years ago, the story of what Trump and his administration are doing to veterans during a pandemic is largely ignored. (Popular Information)
• DHS: White supremacy is ‘most lethal threat’ to the US. The threat assessment — which also warns of continued disinformation efforts by Russia — is especially notable as President Donald Trump has often employed race-baiting tactics in his quest for reelection and frequently downplayed the threat from white supremacists during his term in office (CNN) see also How Trump And COVID-19 Have Reshaped The Modern Militia Movement: The rise of President Trump, and the tumultuous events of 2020, have made it even more difficult to untangle what militias are doing and what their individual adherents believe.  (FiveThirtyEight)
• How We Found Out How Many Debt Collection Lawsuits Oportun Inc. Filed During the Pandemic: Justice of the peace courts, where a majority of debt claims are filed in Texas, aren’t required to report case-level information. Here’s how ProPublica and Texas Tribune reporters got around it to reveal one company’s aggressive tactics. (ProPublica)
• What happened in Room 10? The Life Care Center of Kirkland, Washington, was the first COVID hot spot in the U.S. Forty-six people associated with the nursing home died, exposing how ill-prepared we were for the pandemic — and how we take care of our elderly. (California Sunday)
• Trump officials interfered with CDC reports on Covid-19: The politically appointed HHS spokesperson and his team demanded and received the right to review CDC’s scientific reports to health professionals. (Politico)
• Ahmaud Arbery’s killing was met with silence. His high school football coach vowed to find justice. As some local leaders and institutions fell silent after Arbery’s death — no arrests were made for more than two months — Vaughn, a longtime assistant coach at Brunswick, helped amplify exposure around the case, which led to wider recognition and eventually the arrests of three men on murder charges. (Washington Post)

The virus is a marathon 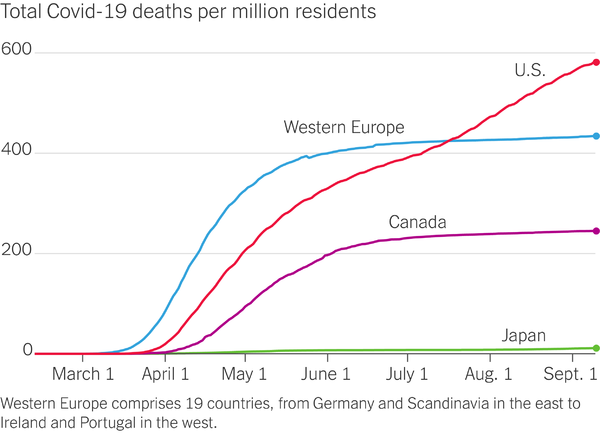