• Goodbye, San Francisco. Hello, Austin. The question of who gets paid what, where, continues to drive a lot of these decisions. Reddit became the latest company to say it doesn’t matter: It’ll pay people the same no matter their hometown. But that argument is far from over. It might be really easy for well-connected, veteran tech execs to live anywhere they want. But for younger, newer folks, proximity to power might still be hard to beat. (Protocol)
• Move Over, Millennials! Boomer Power Is Fueling Latest Leg of Stock Rally The older cohorts of retail investors that tend to use funds for their equity investments appear to have been partly responsible for the big swing in equity markets between October and November. Younger cohorts, including millennials that tend to invest directly in individual stocks or individual equity options, rather than via equity funds, appear to have played a rather modest role. (Barron’s)
• Is Robinhood Good For Investors? Robinhood feels like a casino. In a casino, you gamble. In a casino, the longer you gamble, the more likely you are to lose. The opposite is true in the stock market. The longer you play, the less likely you are to lose. But that depends, of course, on what game you’re playing. And this is the issue. (The Irrelevant Investor)
• How Wells Fargo Became Synonymous With Scandal The history of American business is littered with companies whose reputations fell apart overnight. But it’s rare for a company with a history as long and august as Wells Fargo’s to suffer so quick and thorough a fall. From its beginnings as a cross-country express service in 1852, the company evolved into a regional powerhouse, and from there, to one of the biggest retail banks in the world. But today, for many people, the name Wells Fargo stands for scandal. (Slate)
• What’s in a name? A lot. After early successes with Apple’s PowerBook, Intel’s Pentium, and P&G’s Swiffer, Placek and his team have gone on to work with a number of modern names and startups that will be familiar to most readers. Examples include Sonos and Impossible Foods. (Om)
• The Secret Origins of China’s 40-Year Plan to End Carbon Emissions A veteran Communist Party bureaucrat quietly changed climate history: The biggest emitter of planet-warming pollution managed to take almost the whole world by surprise. In a September speech to the United Nations, Chinese President Xi Jinping put a 2060 end date on his country’s contribution to global warming. No other nation can do more to keep warming below the 1.5C threshold set in the Paris Agreement. Yet diplomats, climate activists, and even policy experts inside China for the most part had not anticipated this pivotal turnabout.(Bloomberg)
• Outdoor Design Ideas for Cold Weather Living Outdoor space, be it a backyard or a balcony, has become precious since the start of the pandemic. Homeowners don’t want to lose the extra square footage just because it is chilly. Homeowners hunkering down during coronavirus are figuring out ways to extend their time outside. (Wall Street Journal)
• Parler, the “free speech” Twitter wannabe, explained Conservatives are flocking to a site where they can post things that Facebook and Twitter don’t allow. The numbers are still small compared to platforms like Facebook, Twitter, and YouTube, which collectively boast billions of users. In the past month, posts mentioning Parler have racked up hundreds of thousands of “Likes” on Facebook. (Vox)
• How 9 governors are handling the next coronavirus wave Here’s a look at how nine governors — from across the country and from across the political spectrum — are responding to what experts fear may become the deadliest coronavirus surge yet in the U.S. (Politico)
• The Botanist Daring to Ask: What If Plants Have Personalities? The idea of plant intelligence is still controversial, but Rick Karban is already well beyond that. Thanks to advances in plant genetics and a new openness toward plant research once considered fringe, botanists have found that plants produce and respond to complex chemical signals. They can detect the slightest touch. They know when they’re shaded by a cloud or a fellow plant, and whether that plant is related to them. Several species can recognize their genetic kin and rearrange their bodies to avoid competing with siblings. They can manipulate predators to do their bidding and transmit electrical signals among their roots. (Green)

Be sure to check out our Masters in Business this week with Greg Fleming, founding CEO of Rockefeller Capital Management based on the prior Rockefeller Family Office. They have about $43 billion in AUM. Previously, Fleming was President of Morgan Stanley Wealth Management and served as Chief Operating Officer of Merrill Lynch, where he ran Merrill’s Global Investment Banking business. 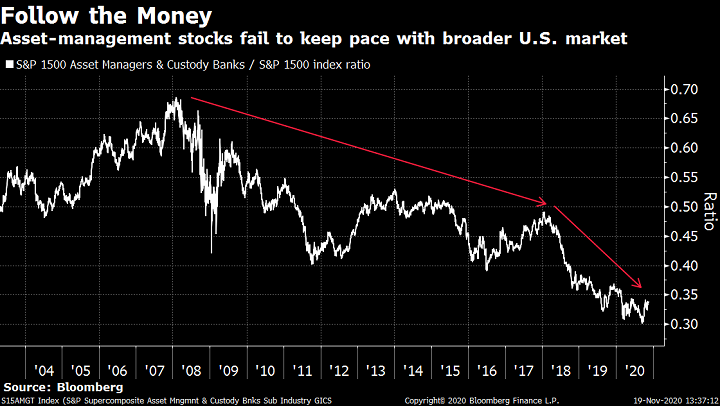