• The 15-Minute City—No Cars Required—Is Urban Planning’s New Utopia From Paris to Portland, cities are attempting to give residents everything they need within a few minutes of their front doors. Can it work—without leaving anyone out? (Businessweek) see also WFH Is Old News. The ‘Near Home’ Office Is the Next Big Thing Rather than commute into a big city, workers get the option of recreating the community aspects of office life closer to home. It would also help address technology deficiencies in some places (Bloomberg)
• Historic vaccine boost for value stocks sparks debate on market reset:  Stocks in Big Tech have been in huge demand since March, dominating indices with startling gains. But the revelation last week that Pfizer and BioNTech had scored a breakthrough in their hunt for an effective coronavirus vaccine sent stocks left behind in the pandemic era soaring. (Financial Times)
• The GOP’s monstrous math problem: Republicans eyeing 2024 runs know the party’s current demographic math may not work for Trump again — and certainly won’t work for them. (Axios) but see also Democrats’ 2024 Problem Is Already Clear: Joe Biden succeeded in bridging his party’s past and future coalitions—but the challenges of future elections are daunting. (The Atlantic)
• The Pandemic Is Showing Us How Capitalism Is Amazing, and Inadequate Why big business needs big government and vice versa. (New York Times)
•  A work-from-home tax: Pro & con: Our economic system is not set up to cope with people who can disconnect themselves from face-to-face society. Those who can WFH receive direct and indirect financial benefits and they should be taxed in order to smooth the transition process for those who have been suddenly displaced.  (Deutsche Bank Research) but see also Why a tax on homeworking is a really bad idea… It is not obvious that homeworkers do pay less tax. They are liable to the same taxes on their income and wealth and the money they save on commuting is spent instead in their local community, or online, or invested in other businesses. (Julian Jessop)
• The Crisis that Forged Biden’s Chief of Staff If Ron Klain can make D.C. governable at all, it will be because of what he learned overseeing Obama’s stimulus plan. (Politico)
•  How Well Did Twitter, Facebook, and YouTube Handle Election Misinformation? There has been plenty of misinformation before and after the election. The platforms adopted and enforced election integrity procedures, showing they could sometimes put out disinformation flares before they blazed out of control. (Slate) see also How Trolls Are Weaponizing “Data Voids” Online Media manipulators use empty spaces to orchestrate highly evolved disinformation campaigns—and they might be targeting Latino voters right now. (Slate)
• How Biden’s FCC could fix America’s internet The FCC can bring back net neutrality and help Americans stay connected during the pandemic — if everything goes its way now. (Recode)
• “He plans to wreck Fox”: Trump eyes starting his own digital media empire President Trump has told friends he wants to start a digital media company to clobber Fox News and undermine the conservative-friendly network (Axios) but see also Trump’s War on Fox News Just Latest Threat for Resilient Network Fox News has faced many obstacles during its 18 years as the No. 1 cable news network, and has managed to maintain its lead. It has weathered a sexual-harassment scandal, the death of founder Roger Ailes, the departure of stars Glenn Beck, Bill O’Reilly and Megyn Kelly, and the arrival of right-leaning rivals, Newsmax and One America News Network. (Bloomberg)
• Taylor Swift’s Early Music Catalog Changes Hands Again Investment firm snaps up master recordings of pop star’s first six albums for more than $300 million (Wall Street Journal)

Be sure to check out our Masters in Business this week with Penny Pennington, Managing Partner (CEO) of Edward Jones. The 98-year old Fortune 500 financial services firm has over 7m clients, with $1.3 trillion in assets and 17,000 financial advisors. Pennington is first non-family member to manage the firm; she is ranked #33 in Fortune’s Most Powerful Women in Business list.

Biden-voting counties equal 70% of America’s economy. What does this mean? 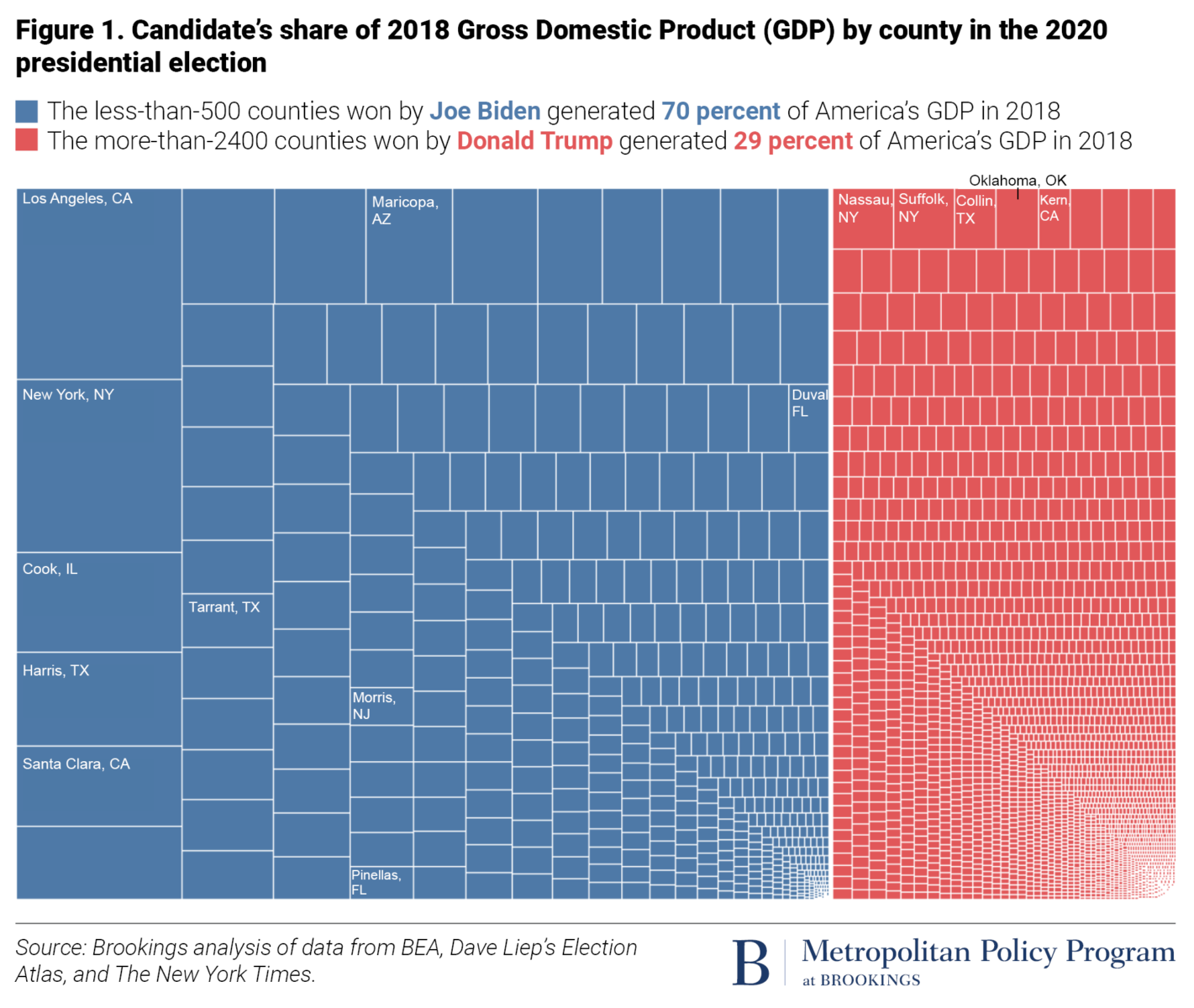 MiB: Keeping the Lights on During the Pandemic