Given yesterday’s eye-popping Producer Prices — the 12 months ending in February, overall wholesale prices rose 2.5%, the highest reading since August 2006 — there was some concern about today’s Consumer Prices.

And with good cause: the headline number was plus 0.4%, higher than expected (0.3%). We are told there is “nothing to worry about here,” though: Once we remove everything that has gone up in price, inflation remains contained. Core prices, excluding food and energy, increased only 0.2% in February.

Consider that February prices for “crude
foodstuffs and feedstuffs” were up 18.8% above year-ago levels, its no surprise that food
companies are passing those higher costs to consumers. Wholesale
consumer food prices are 6.8% above year-ago levels. The WSJ noted that Energy prices increased by 0.9% in February, while Gasoline prices rose 0.3%. Natural gas prices swelled 5%. Those begging the Fed for a rate cut can forget about the next 2 FOMC meetings; Barring a full-blown market meltdown, cuts at those gatherings simply aint gonna happen.

Ahhh, inflation ex-inflation. Where would we be without you? 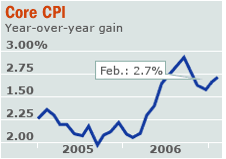