Bruce Krasting: I worked on Wall Street for twenty five years. This blog is my take on the financial issues of the day. I was an FX trader during the early days of the ‘snake’ and the EMS. Derivatives on currencies were new then. I was part of that. That was with Citi. Later I worked for Drexel and got to understand a bit about balance sheet structure and corporate bonds from Mike Milken. I was involved with a Macro hedge fund later. That worked out all right, but it is not an easy road. There was one tough week and I thought, “Maybe I should do something else for a year or two.” That was fifteen years ago. I love the markets. How they weave together. For twenty five years I woke up thinking, “What am I going to do today to make some money in the market”. I don’t do that any longer. But I miss it.

When you stick your neck out and make prognostications about the future, sometimes you’re going to be wrong. I’m certainly no exception. But when it comes to really big misses, I think Meredith Whitney’s call for a monster blow-out of the Municipal Bond market is on top of the list. 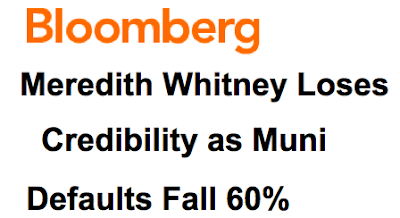 Meredith is a smart lady. That being the case, it’s worth looking into why she was so wrong. A report this weekend from the Bond Buyer provides a partial answer: 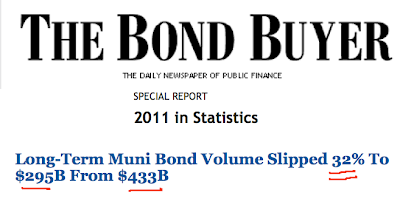 A 32% ($138B) YoY decline is a very big relative change. The drop in long-term financing was not offset by increases in short-term debt; that category fell by 7.4% ($5B).

The drop in total borrowings is almost exclusively a result of the 46% ($129B) in the “New Money” category. The drop in New Money debt issuance is a consequence of hundreds of cities and states collectively saying:

We’re in a pinch on revenues. Let’s not spend any money we don’t have to for the time being. We’re going to have put off the construction of the new (Sewer plant, overpass, water treatment facility, school, whatever). The last thing we want to do is go to the Muni market and borrow any more.

As a result of many individual decisions to defer infrastructure projects, the Munis have kicked the can down road. They have eliminated the current and future expenses related to these projects. With that, they have stabilized the trajectory of their debt growth and improved short-term cash liquidity (by having less ST debt). In the process, they have created a shortage of muni bonds (relative to expectations) in the market.

Thus, all may appear well in muni land. A successful re-balancing has taken place, for the time being. If the munis can continue to push off infrastructure projects, they will not suffer the fate that Ms. Whitney feared they might.

I said that the munis had “kicked the can down the road”. In this case, it’s quite a different form of can kicking. When the Federal government raises the debt ceiling, we all say, “They kicked the can”. But the munis are doing (pretty much) the exact opposite, so Can Kicking would appear to be an improper/unfair description of what is happening with Munis. I think it’s still valid, deferring infrastructure investments is another form of kicking.

Like most Kicking efforts, it will end badly sooner or later. I’m looking at a potential example as I write. One of NYC’s reservoirs is about a half mile away. A $60mm NYC/NYS funded construction plan was shelved a month ago. Could this become one of those examples where Kicking goes badly? Consider this daisy-chain.

The Croton Reservoir is part of a chain of reservoirs that provide water for NYC. It’s large (22 miles), but it’s small in comparisons to the big man-made lakes further upstate. Croton is important because it connects directly to those upstate reservoirs via an underground tunnel. That tunnel goes north, and then west. It is 1,000 feet deep where it meets the Hudson River. 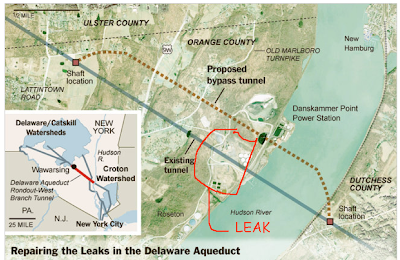 A bit of physics. The upstate reservoirs are 1,000 feet above the sea and the tunnel is 1,000 below. The tunnel is (was) large enough to drive a truck through so the water pressure at the lowest part of the tunnel is enormous. What might you expect from a 75 year old tunnel under that much pressure? A leak? Sure.

This is one hell of a leak. As much as 35 million gallons a day was the estimate seven years ago. There is evidence that rate has since accelerated. That comes to  13 billion gallons a year, which is sufficient for 250,000 average Americans. Think Orlando, Madison, Winston-Salem or Reno. Each of these cities uses about as much water as NYC is leaking. In China, this much water would meet the needs of 1.7mm people, In Bangladesh it would be sufficient for 3mm. It’s enough to fill 650,000 in-ground swimming pools. That’s a leak.

It gets worse. The leak was first detected in 1988. Therefore something like 15 million swimming pools worth of drinkable water have been pissed into the ocean. It’s so bad that areas on either side of the tunnel have sinkholes. People have been forced to move. Properties have been condemned. And the sinkholes keep getting bigger.

There are already dozens of lawsuits on this. They are after the State and the City who own and maintain the reservoirs. The judges have all sided against the City and State, and there have been promises to fix the damn leak for years. A few years ago, a formal plan was put together. 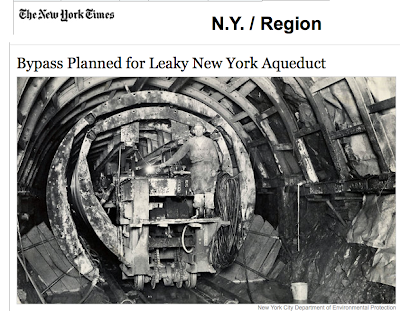 This is no small engineering matter. A new tunnel will be built that connects the old tunnel before and after the break. Once completed, the old tunnel will be cemented closed. The diversion tunnel will be ½ mile long. Recall that this is 1,000 below sea level, any construction/mining this deep is both difficult and dangerous (the bends). Those normal risks are, however, trumped by risks that the nearby existing tunnel breaches during construction of the diversion tunnel. The water pressure in the tunnel is sufficient to crush a submarine.

The only option is to stop the flow of water in the tunnel from the source, and then pump out what is left. The supply of water would be cut for about a year while the diversion tunnel is completed. This takes us back to the Croton Reservoir and the cancelled construction at this location. The plan was to raise the spillway by four feet. This change would have added a permanent storage to the NYC system of 11B gallons (11 days of consumption). It was intended that this expansion of storage would be completed before the leaking water tunnel is closed. It would have provided an additional level of comfort on available water for the City. Not any longer.

NYC’s has numerous sources of water. The Croton reservoir system could be eliminated for a period of time without a real shortage. However, that would not be true if the tunnel was closed for an extended period, particularly if there was a drought in the northeast.

I wouldn’t be surprised if the cut off in supply were much longer than the one-year projection. The North East has been blessed/cursed with above average rainfall for years due to the long running La Nina, but rainfall is impossible to predict. Could we be in a full-blown El Nino (dry in the NE) when the construction starts? Maybe. If so, NYC will regret not having upgraded the storage capacity at the Croton system.

I don’t want to leave the impression that NYC is headed for trouble. The possibility of a hard landing is small. But there are risks, and those risks are increased as a result of the cancellation of the Croton project. Caswell Hollowy, the NYC commissioner on the tunnel repair project said in 2010:

When Hollowy said this, the plan to upgrade the Croton system was still on.  Now it is has been shelved (Budget concerns were the reasons cited). It’s now more “critical” to get that timing right. I’m laying 4 to 1 they don’t.

The Bond Buyer reported a drop of $129B in New Money bonds. If you consider the $60mm Croton project as being representative, about 2,200 projects got cancelled last year. With that big a number, it is just a matter of time before something falls through the cracks (literally) and economic consequences follow.

Will NYC or some other city have water supply problems?


Will some municipality have a breakdown in its water treatment capacity that results in huge sewage leaks?


Will a bridge collapse that restricts important commerce?


Will there be a blow-out of the electrical grid due to underinvestment?

The answers to these questions (and more) is that infrastructure breakdowns will occur. If we don’t invest, the  resulting “leaks” will come back and bite us in the ass.

So far, the munis have reacted to their changed financial circumstances and have avoided the fate that Whitney saw coming. If they (collectively) continue doing what they did in 2011, they will probably avoid a financial crisis. But that doesn’t preclude problems sometime soon. Some big “things” are going to break. When they do, large communities will be affected. In the end, Whitney might be right that some munis will run into trouble. If that trouble is the consequence of a significant infrastructure failure, Meredith Whitney will be right, for the wrong reasons.

*I’m sorry this went on and on. I just love big construction projects.

*Why did the tunnel under the Hudson fail? It went through a section of limestone. The water from the reservoir is filled with acid rain. The acidic water dissolves limestone. The original tunnel designers had no clue what acid rain was, so the limestone section was not sealed during construction.

*The 138B drop in New Money is equal to 0.9% of total GDP. This lack of borrowing was a drag on total output. Another good example of Debt = Growth.
. 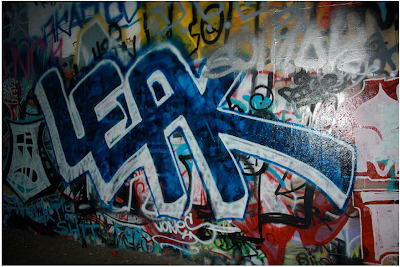 Posted by Bruce Krasting at 6:44 AM