That is according to today’s front page of USA Today: The print edition had a center column, above the fold, screaming green headline “Invest in stocks? FORGET ABOUT IT.” That Cap and Bold headline is as it was in original. (The online version was the tamer Invest in stocks? Small players still smarting).

It may surprise some people to learn this is both an expected and positive development. It implies eventual lower prices (over the intermediate term), but will also help to create that elusive lasting market bottom, as I will explain in a moment.

“On Main Street these days, investing in the stock market is about as popular as watching a scary movie on a 12-inch black-and-white TV.

Wall Street’s long-running story about how stocks are the best way to build wealth seems tired, dated and less believable to many individual investors. Playing the market isn’t as sexy as it used to be. Since the 2008-09 financial crisis, the buy-now mentality has been replaced by a get-me-out, wait-and-see, bonds-are-safer line of thinking.

Stocks remain out of fashion even though the stock market has risen more than 100% since the bear market ended three years ago. It’s up 25% since October and 9% this year.”

This is no surprise — between the run of scandals in the 1990s and 2000s, the dot com implosion, analyst scandal, the 2007-09 crash, housing collapse, the flash crash, and HFT, mom and pop have taken their ball and gone home.

This is how bear markets eventually end.

Most people misunderstand what drives secular bull and bear markets, focusing on prices alone as the defining characteristics. I believe this is in error, or at very least paints an incomplete picture.

Whenever I give a market presentation at a conference, I always use the chart below. It explains in great deal how Main Street investor psychology impacts the long secular cycles of bull (green) and bear (red) markets. Note the metric at bottom, which is P/E ratio.

My definition of a Secular Bull Market: An extended period of time, typically lasting 10-20 years, driven by broad economic shifts that create an environment conducive to increasing corporate revenue and earnings. Its most dominant feature is the increasing willingness of investors to pay more and more for a dollar of earnings.

You can see this in the 1982-2000 secular bull market. Total returns were driven partly by earnings improvements, but far more by multiple expansion. This is essentially a psychological component.

A Secular Bear Market reflects the opposite: Following an extended secular bull, it is a period of time marked by increased volatility, frequent cyclical rallies and corrections, in an economically challenging environment. The dominant feature is that Investors are willing to pay less and less for that same dollar of earnings.

We see that today. Profits going up as volumes go down; investor interest ebbs and fades. Its how markets can go sideways or even rally and still see P/E ratios fall.

Ultimately, when the process generates enough investor disgust, we can form a lasting market low, typically, in the Single digit P/E ratios.

(The caveat is we don’t know how unprecedented Fed printing affects this psychological process). 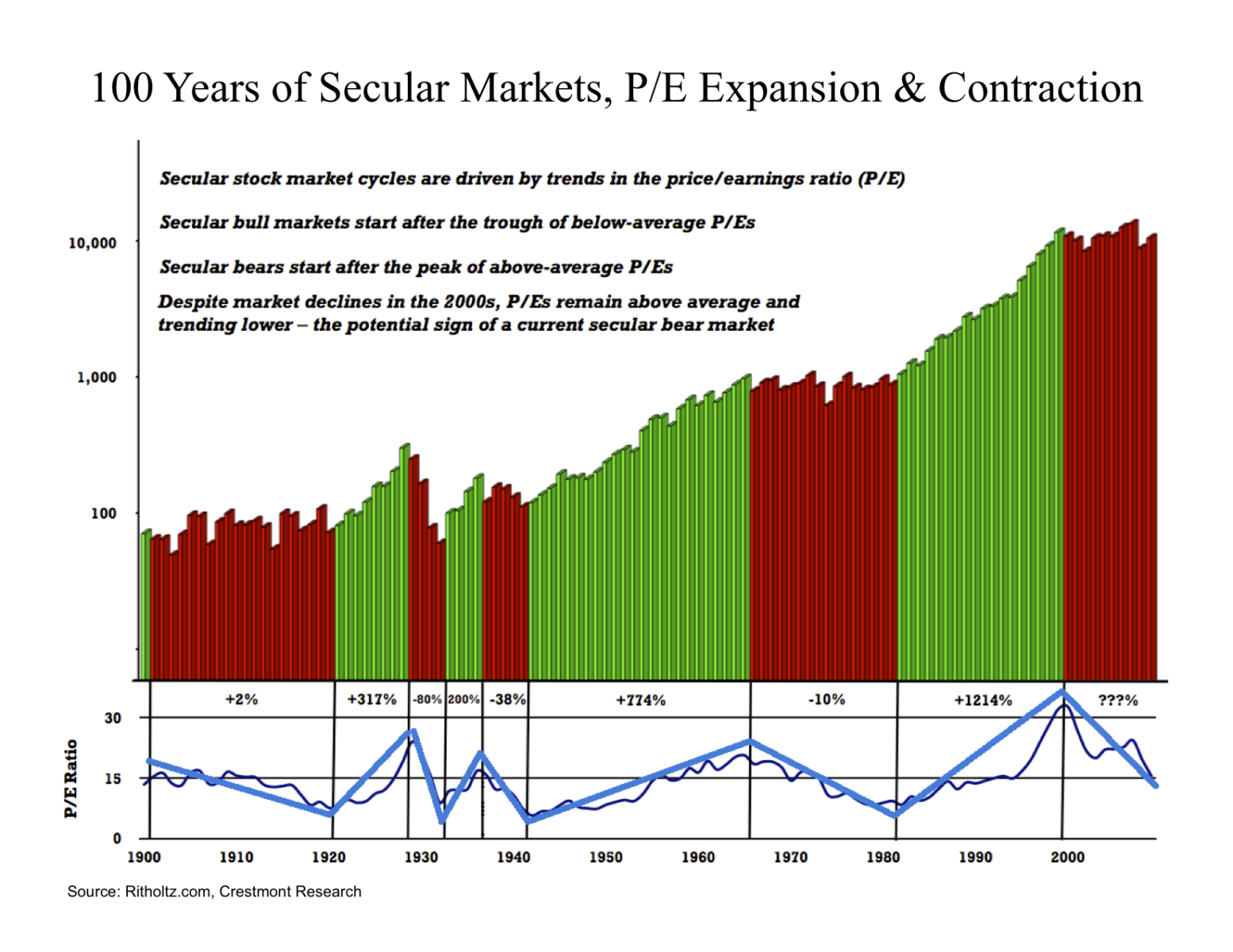 The Take-Away From The European Elections