Take a Moment to Appreciate the Recovery
This may not be the greatest economic rebound, but it’s still real.
Bloomberg, November 23, 2015

A few weeks ago, I described why this economic recovery remainsdoubted and unloved. The improvements have been very unevenly distributed, with wide disparities based on education level, geographic location and industry. Some peoples’ recoveries are far worse than others.

However, sometimes we lose sight of the basic facts. The data show the economy is expanding and creating jobs in a manner consistent with recoveries from credit crises: Getting better, slowly, though maybe not fast enough to lead to a general sense of optimism.

But the signs of recovery are undeniable. Consider the latest Bureau of Labor Statistics data looking at regional and state unemployment changes. As the chart below shows, as of last month there was no state with an unemployment rate higher than 7 percent. That’s the first time that has happened since 2007. 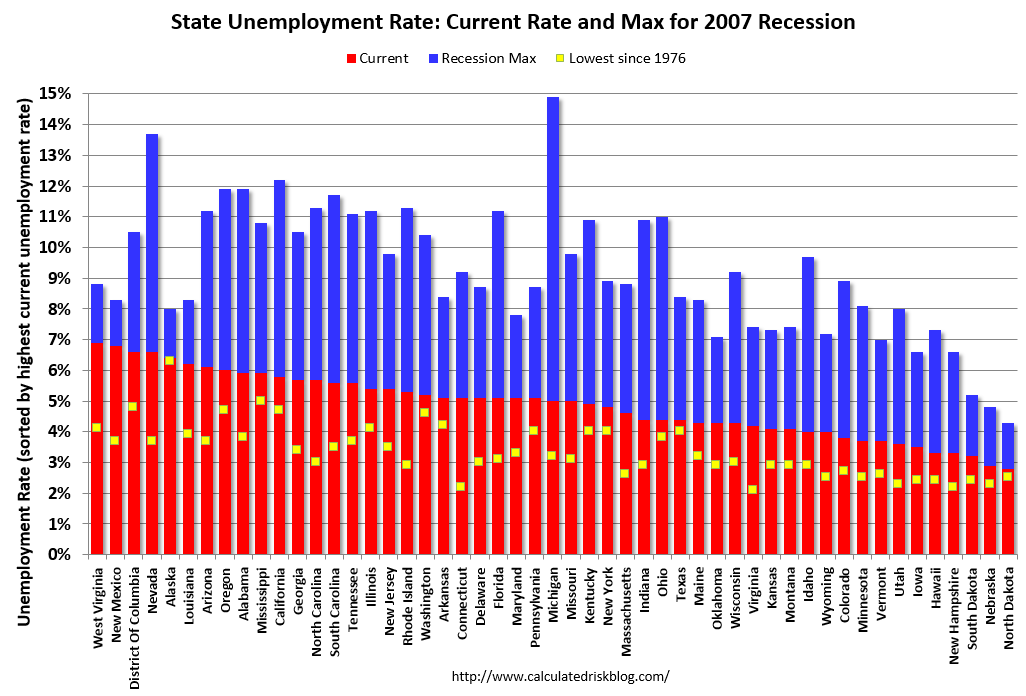 North Dakota, which is still benefiting from the fracking boom, had the lowest jobless rate in October, at 2.8 percent, followed by Nebraska, at 2.9 percent. West Virginia had the highest rate, 6.9 percent. Despite the decline in demand for coal, a 7 percent unemployment rate isn’t so bad; it was only a few decades ago that this was thought of as full employment.

Even long-term unemployment has been improving. Defined by theBLS as “Civilians who are jobless, looking for a job, and available for work and have been unemployed for 27 weeks and over,” it has fallen a lot. The percentage of long-term unemployed as a share of the pool of jobless workers has declined from 45.5 percent in April 2010 to 26.8 percent last month. In actual numbers this is significant — 6.8 million down to 2.1 million last month. That’s really a major improvement.

Of course, there is still some hair on this recovery. Underemployment remains a problem, albeit one that is improving. U6 unemployment, the broadest measure of labor utilization, has fallen from 17.1 percent to 9.8 percent. To put this into context, in the three years before the recession, it averaged between 8 percent and 9 percent.

As to the labor force participation rate, which at 62.4 percent is at lows not seen since the 1970s, David Rosenberg of Gluskin Sheff recently explained why this is more a function of demographics, globalization and automation than a testimony to the health of the economy. There are long-term, secular forces at work that are not necessarily a reflection of the cyclical recovery from the Great Recession.

As much as many folks are inclined to disbelieve these numbers, they are consistent with everything else we see in the recovering economy: auto sales, gross domestic product, total employment, home prices, manufacturing, air travel, consumer spending, and, of course, the stock market all have seen gains since the recession ended in 2009.

The biggest negatives remain soft (or nonexistent) wage increases, lack of first-time homebuyers (and lack of housing affordability), deflationary tendencies, lots of personal debt and a big increase in people on various forms of assistance, including a large rise in the number of people claiming disability benefits.

Regardless, it is becoming increasingly difficult to avoid reaching the conclusion that the economy has improved, and continues to get better.

Perhaps some of the recovery skepticism is due to the primary campaigns. No one from the opposing party to the one controlling the White House ever runs on the proposition that everything is just fine. However, the politicization of economics in general, and of this recovery in particular, has now reached the point where we must remind ourselves how much things have improved. It isn’t a perfect economic environment, but it’s so much better than it was.

I still see plenty of data showing the recovery as lumpy and unevenly distributed. Regardless, even the states with the worst recoveries are seeing their unemployment rates reach lows not seen in almost a decade. That is something to be thankful for.

Originally published here: Take a Moment to Appreciate the Recovery

Facebook, Amazon, Netflix, and Google: Over $440 Billion in Cap Creation Over 2015