The weekend is here! Pour yourself a mug of Le Mans coffee, grab a seat where you can see the leaves turn, and get ready for our longer form weekend reads:

• Psychology, Behavior & Markets “Human nature is the last arbitrage.” Despite all the facts, figures, and statistics, much of the stock market comes down to human behavior (Investor Amnesia)
• Robinhood’s Addictive App Made Trading a Pandemic Pastime Now the platform has to make money from its devoted fans. (Businessweek)
• The World Henry Ford Made A new history charts the global legacy of Fordist mass production, tracing its appeal to political formations on both the left and the right. (Boston Review)
• Peak Gas Is Coming to the U.S. Sooner Than Anyone Expected The American fracking boom had made the fuel superabundant and cheap. Now there are flashing signs that the U.S. power sector is approaching peak gas, with demand topping out decades ahead of schedule. (Bloomberg)
• String of Firms That Imploded Have Something in Common: Ernst & Young Audited Them Big Four accounting concern reviewed the books of several companies where investors lost billions when scandals emerged. The firm says it uncovered some of the problems at its clients.(Wall Street Journal)
• Staying Home: How the Coronavirus Changed Consumer Behaviors and Company Valuations What consumer trends during the pandemic have meant, and will mean, for companies in technology, hospitality, and e-commerce (Morningstar) see also The Genius of Supermarkets: A short history of the stores that—even now—keep us supplied with an abundance of choices. (The Atlantic)
• The 8th Wonder of the World*  (*wonder not guaranteed) In 2017, President Donald Trump and the Wisconsin GOP struck a deal with Foxconn that promised to turn Southeastern Wisconsin into a tech manufacturing powerhouse. Inside Foxconn’s empty buildings, empty factories, and empty promises in Wisconsin.  (The Verge)
• Here’s How Much You Would Pay Under Biden’s and Trump’s Tax Plans: Former Vice President Biden has a detailed proposal that involves raising taxes on people with taxable income of more than $400,000—essentially targeting the top 1%. President Trump wants to keep the tax cuts that went into effect in 2018, which largely benefited top earners. (Barron’s)
• Audio’s Opportunity and Who Will Capture It As most of the major media categories — music, video and video games — have existed for decades, we tend to forget that media is technology.  (Matthew Ball)
• An Ocean Separated Them. A Surfboard Connected Them. See: 2020 Has a Happy Story After All An unlikely tale about an Ohio mechanic who lost his cherished board on one side of the Pacific and a teacher from the Philippines who found it on the other. (Sports Illustrated)

The Worst Virus Outbreaks in the U.S. Are Now in Rural Areas 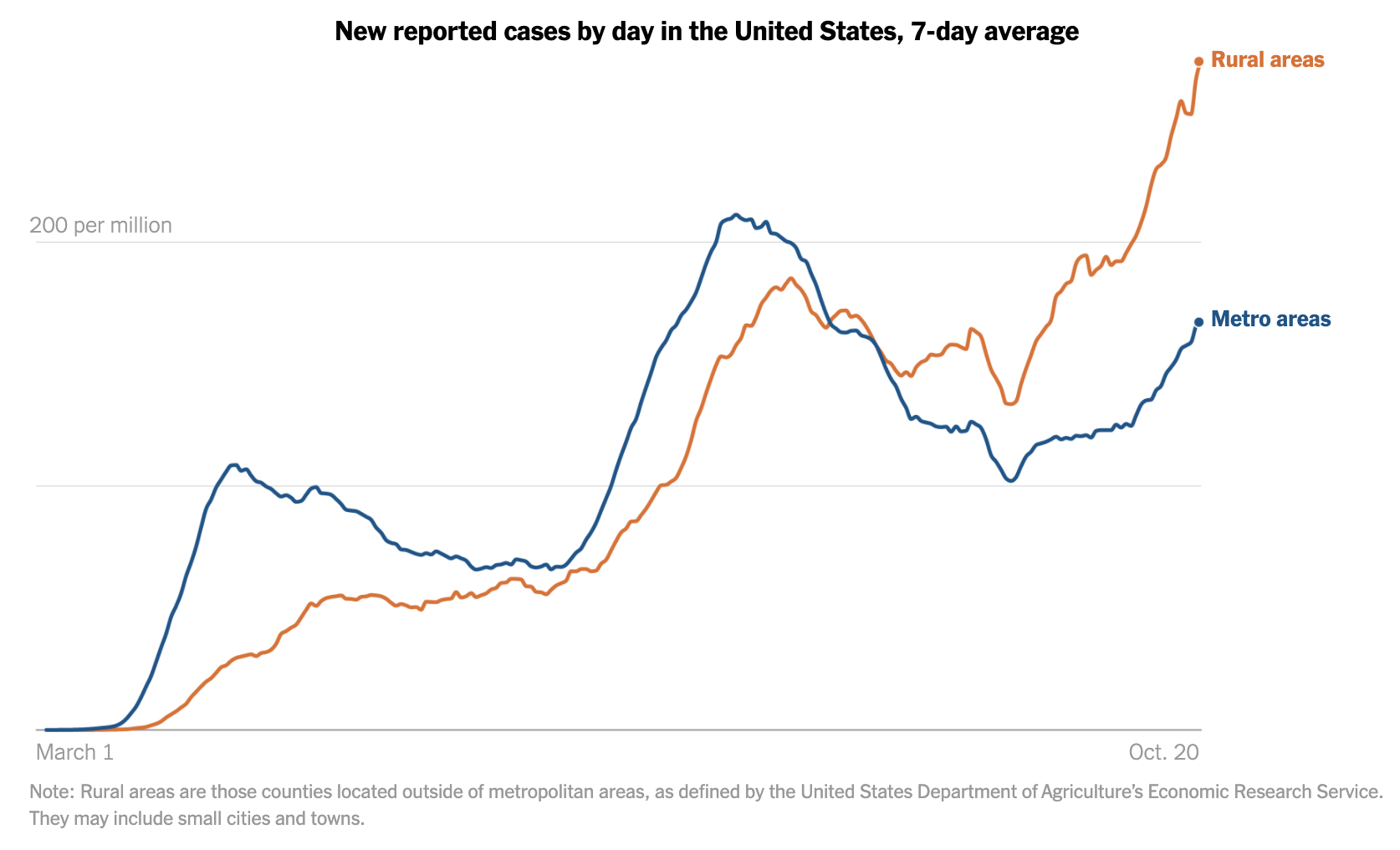