• How Hard Is It to Overturn an American Election? Ultimately, it’s not going to work. But it is working better than I would have believed possible: in undermining confidence in American democratic processes, in damaging President-elect Joe Biden’s ability to govern in the short term, and in raising questions in the minds of the faithful as to whether Trump’s defeat was real. (Lawfare)
• An Economist’s Guide to the World in 2050 China Won the Cold War. Here’s What That Means for Free Markets (Businessweek)
• Quant Shock That ‘Never Could Happen’ Hits Wall Street Models The crash in the momentum factor was so rare that writing out the chances of occurrence on any given day required a 16-digit number — followed by 63 zeroes. (Bloomberg)
• Biden’s Transition Team Is Stuffed With Amazon, Uber, Lyft, and Airbnb Personnel Biden’s agency review teams highlight the revolving door between big tech and Washington even as the president-elect opposes Uber’s Proposition 22. (Vice)
• The online anti-vaccine movement in the age of COVID-19: Social media accounts held by anti-vaxxers have increased their following by 8 million people since 2019. The CCDH warned that the growing anti-vaccine movement could undermine the roll-out of any future vaccine against COVID-19. (The Lancet)
• The Times Called Officials in Every State: No Evidence of Voter Fraud The president and his allies have baselessly claimed that rampant voter fraud stole victory from him. Officials contacted by The Times said that there were no irregularities that affected the outcome. (New York Times) see also The President Cries Voter Fraud. In Court, His Lawyers Don’t. Pressed by judges, some attorneys representing Trump back away from claims  (Wall Street Journal)
• A furious behind-the-scenes battle to counter POTUS threat to national security: President Trump’s senior military and intelligence officials have been warning him strongly against declassifying information about Russia that his advisers say would compromise sensitive collection methods and anger key allies. (Washington Post)
• One Last White House Grift: Donations under $8K to ‘election defense’ instead go to president, RNC All small-dollar donations from grassroots donors won’t go to legal expenses — it goes to “Save America,” a Trump leadership PAC and the Republican National Committee (RNC). Under Federal Election Commission rules, both groups have broad leeway in how they can use the funds. (Reuters)
• What to do about Troubling Police Unions?: Philadelphia police allegedly pulled a 2-year-old Black toddler from the back seat of his family’s SUV after breaking all of the windows and injuring his mother in a violent arrest—then a police union posted a photo of the child on Facebook and claimed officers were protecting him after he got “lost. (Daily Beast)
• How Trump Sold Failure to 70 Million People The president convinced many voters that his response to the pandemic was not a disaster. The psychology of medical fraud is simple, timeless, and tragic. (The Atlantic)

Be sure to check out our Masters in Business this week with Penny Pennington, Managing Partner (CEO) of Edward Jones. The 98-year old Fortune 500 financial services firm has over 7m clients, with $1.3 trillion in assets and 17,000 financial advisors. Pennington is first non-family member to manage the firm; she is ranked #33 in Fortune’s Most Powerful Women in Business list.

Joe Biden triumphs over Trump, says it is ‘a time to heal’ even as Trump does not concede 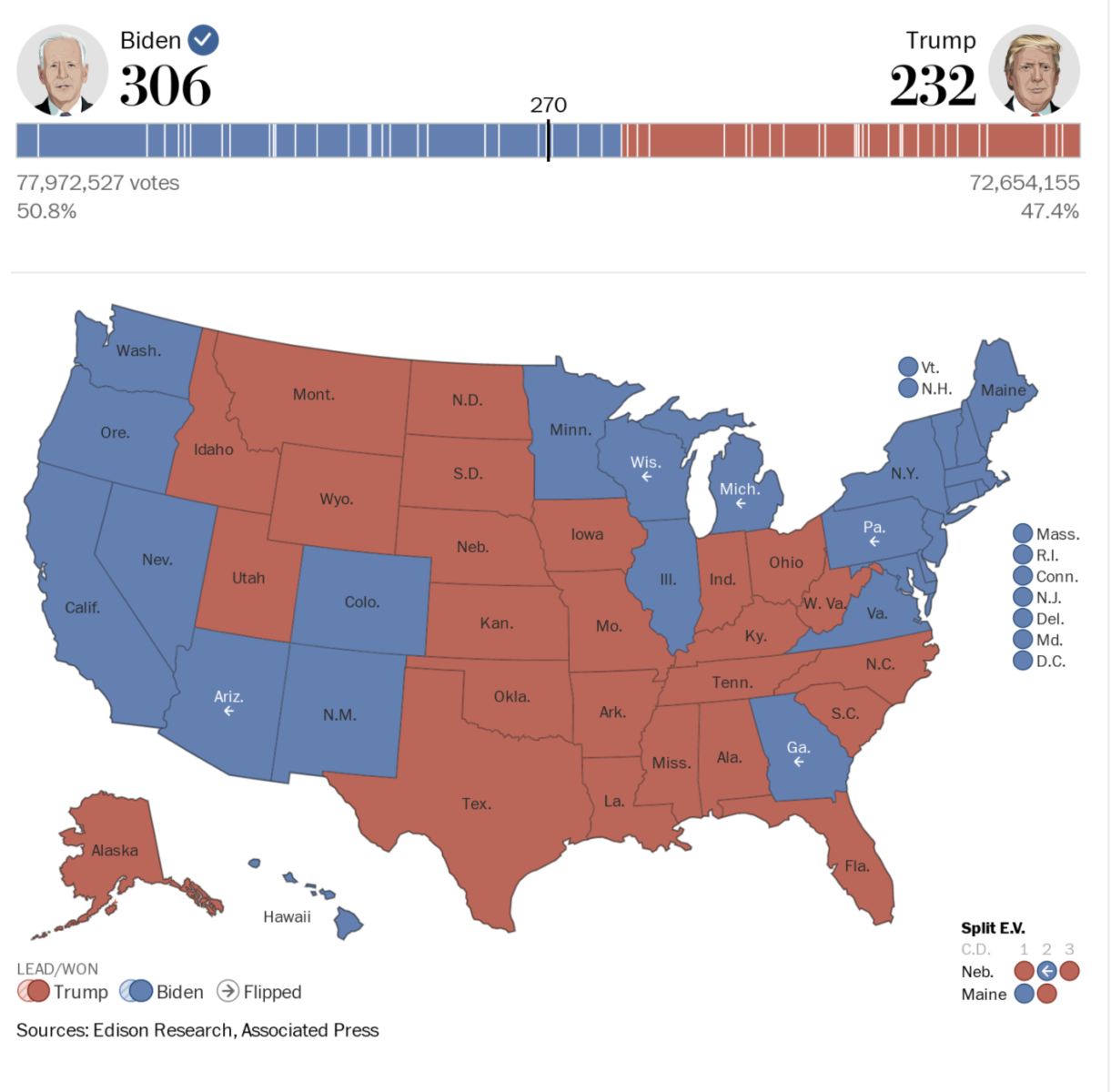 The Never-Ending Crisis of the Electoral College