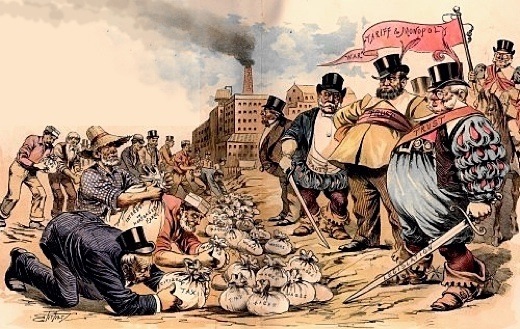 I have previously discussed all of the ways active managers have been slagging low cost indexers, but here is a quick reminder for you:

“Active-investing advocates warn us that low-cost indexing is “worse than Marxism,” is “devouring capitalism” an is “lobotomized investing.” The litany of complaints doesn’t end there: Passive investing is “distorting market liquidity,” creating a “mania,” and is a “frightening risk” to markets; indexers “ignore fundamentals,” and are “terrible for our economy.”

That is from my Bloomberg column, which takes a rational, mathematical-based look at this issue (more on that tomorrow). None of these financial analyses have gained traction. And so, failing in market-based arguments, the debate has shifted to the truly bizarre – and it comes from the lawyers.1

For now, I have other questions about this foolishness.

Loosely based on a 1986 analysis on joint ventures2 that used GM-Toyota’s joint venture in making cars as its core example, a few legal scholars have tortured this thesis to extend to index fund and the companies they all own simultaneously.3

This theoretical argument, as applied to index funds, makes no sense; there is no viable evidence in support of it. It does raise lots of other questions.

We were reminded of this frippery courtesy of last week’s Morningstar Investment Conference. A panel that looked at the absurdist question “Are Index Funds Eating the World?” According to Barron’s, one of the panelists, University of Chicago law school professor Eric Posner, argued that “The concentration of ownership, particularly by the Big Three indexers, BlackRock, Vanguard Group, and State Street, can hurt consumers.”

These three intensely competitive fund managers fighting for market share and customers, are somehow hurting consumers? (I was away last week – did we throw out the basic rules of capitalism?)

In my Bloomberg column, I explain all of the reasons this is wrong. But in this space, I want to supplement those arguments by asking the simple question “Why?”

Why would the giant indexers engage in a criminal conspiracy to restrain trade and fix prices? What would motivate these giant indexers to put their brand reputations and indeed their entire franchises at risk?

Consider: Blackrock is a publicly owned investment manager running over 6 trillion dollars. It has a market capitalization of $72 billion dollars, revenues close to $14 billion dollars and a gross profit of $7 billion dollars. Vanguard Group, the mutual held jointly by its investors, manages over $5 trillion dollars. And while the third largest indexer, State Street, is smaller than the first two, it is still a $1 billion-dollar company.

So the argument put forth is that somehow, Blackrock and Vanguard and State Street are going to put all of the success they have achieved over decades at risk, throw out their investment philosophy, ignore their own companies’ fiduciary obligations to their investors, risk all of that, for . . . what? To allow some of the 1000s of companies they hold to raise prices and reduce competition?

Towards what ends might this possibly serve? The risk/reward ratio of this seems terribly reckless. Risk the franchise for the benefit of a few holdings that might increase revenues to those companies? Who  int he world would risk billions of dollars in revenue and profits and market cap for a result that at best has a nebulous benefit?

Such idiocy could only come from academia.

Pensions & Investments, in an editorial earlier this year, warned “This, theoretically, could give a handful of index fund managers enormous power over U.S. companies through their corporate governance actions. By voting their proxies they could determine who serves on the boards of directors, how much top managers are paid and even strongly influence corporate strategies.”

Which is an odd thing to warn against, because those are exactly the sorts of things that funds, operating on behalf of the investor-shareholders, are supposed to do. Legally.

While the index ownership thesis may be a thought experiment, it is one that requires you to suspend reality and hypothesize a world where companies operate against their own best interest for reasons that are not quite fathomable.

Until its supporters manage to dig up some evidence that the largest indexers are conspiring to work with the corporate management of the companies they hold to defraud consumers, this thesis should be consigned, with the rest of the crazy conspirators, with Alex Jones, Anti-Vaxxers and the Flat-Earthers.

3. That plant has changed ownership. Formerly known as NUMMI, you now know it as 100% Tesla Motors-owned production facility.

MIB: A Guitarist on Taking Care of Business