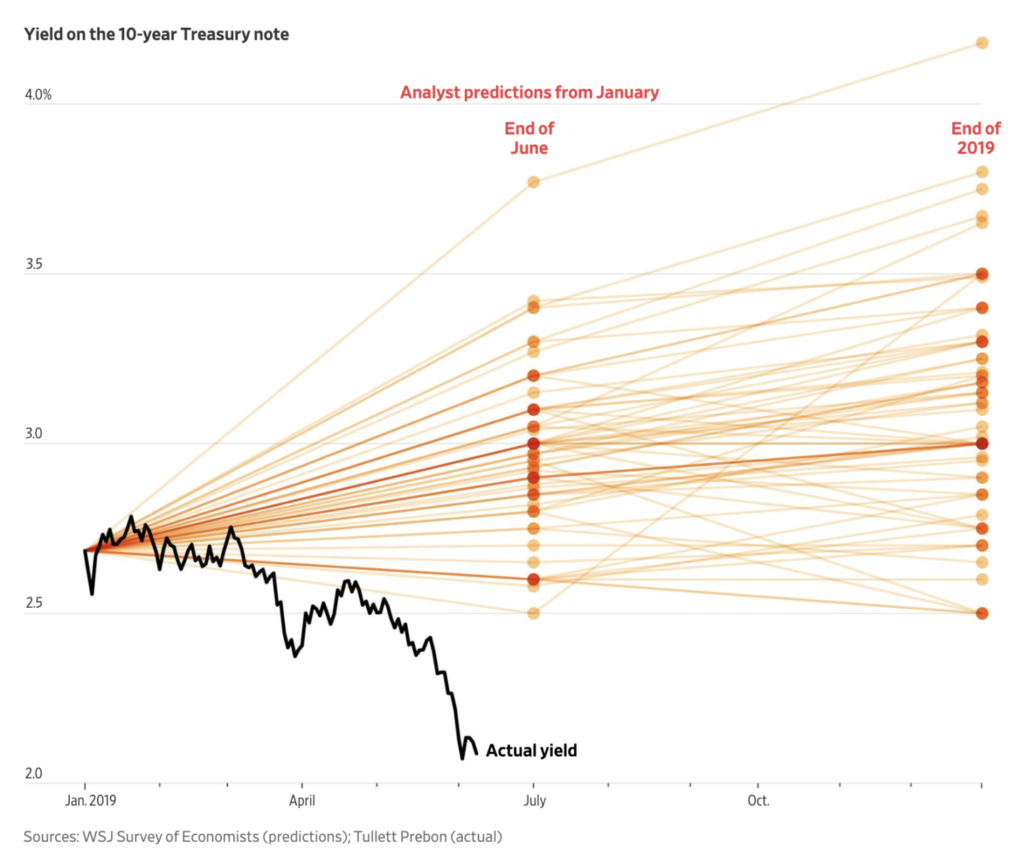 Last week, I showed this great chart by Torsten Sløk of Deutsche Bank. It revealed  just how bad markets are at forecasting future Federal Reserve actions. As the chart shows, the markets are almost always wrong about future Fed action. This is not an outlier; markets are frequently wrong about all manner of embedded predictions as to future actions of all kinds, be they economic, profit-related, inflation, interest rate, etc.

So much for the wisdom of crowds.

Along those lines, the WSJ had a similar column earlier this week, on why the drop in 10-year treasury yield has been so “rapid and completely unexpected for many investors.”

The more important question: Why would anyone expect investors to have the slightest idea about where short term interest rates are going?

Not every market data point has an embedded forecast in it. Some transactions are simply a shift from one asset class (stocks, real estate) into another (bonds, cash) that might be taking place for a broad variety of reasons, none of which have anything to do with making a guess about the future.

What is most consistent among all of these forecasts about prices is this: They all seem to be dependent upon recent activity, which conveniently gets extrapolated far into the future.

How could that ever go wrong?

The complexities of the real world intrude upon these forecasts. Unexpected events occur, expected events lead to unanticipated reactions, complications occur. Geopolitical events, deaths, war, political shifts, news, noise, surprises, all manner of things take place over the ensuing 12 months that simply are not reflected in the baseline forecast models.

And when it does, the best laid plans, expectations and predictions fail. They fail HARD. It is not that the forecasts were foolish, but rather, that the FORECASTERS were. Of all the silly pattern recognition investors indulge themselves in, you might think some of them would have noticed the obvious pattern that Human, as a group, are blatantly not very good at this pastime.

Its yet another example of William Goldman’s  truism that “Nobody knows anything.”

Source:
Some Investors Had Hunch Yields Were About to Fall
Avantika Chilkoti and Daniel Kruger
WSJ, June 9, 2019
https://www.wsj.com/articles/some-investors-had-hunch-yields-were-about-to-fall-11560072600

More Evidence of the Folly of Forecasting (February 11, 2016)