“My Municipal Assistance Corporation (MAC) bonds got called. Find me something to replace them with. They pay 14% tax free…”

That’s how a phone call with my father-in-law Harry began back in the late 1990s. He had a few vintages of MAC bonds, and they were yielding 10, 12 even 14% to maturity. He wanted something comparable, and was not very happy when I told him what was available then: 10-Year treasuries About 6%.

The irony of course being investors would kill for 6% yielding risk-less paper today.

How Harry ended up with 14% bonds is a simple story of street smarts, risk-taking and a bit of history. He owned a dry cleaning store, a small business that did well enough to put 4 kids through college and grad school. After he retired, to keep busy, he took a part time job at the IRS, helping with audits and accounting. He didn’t need the gig: His portfolio of primarily banks and telecoms, stocks amassed slowly over 40 years, had grown into a tidy sum. Harry was the classic “millionaire next door,” a frugal saver whose only vice was spending on his kids and grandkids. (I’ll save my favorite Harry stories for another time — there are many, and they are all charming).

I asked him what led him to buy what at the time looked like a high-risk paper in an otherwise conservative portfolio. To him, the MAC bonds were an obvious buy: “The country cannot afford to let New York City go bankrupt. They had to save it.” 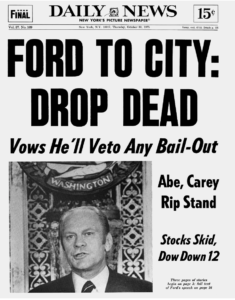 The man who did just that was Felix G. Rohatyn, who passed away this week at the age of 91.

For those who may not recall, New York City was all but insolvent in April, 1975. To avoid bankruptcy, the City asked President Ford for a bailout. Ford said no, leading to one of the most infamous NY Daily News headlines ever: Ford to City: Drop Dead.

Governor Carey had tapped Rohatyn, a Lazard Freres banker to develop a bailout plan that would stabilize New York City, then get its financial house in order. The story of how he got it done is worth recalling.

The decade prior to 1975 saw a series of national recessions, market crashes, an oil embargo and spike in inflation. The Vietnam war and Watergate, to say nothing of Disco and polyester, all contributed to a national malaise.

Despite the sluggish economic backdrop, declining city tax base, and shrinking population, NYC’s municipal work force had swollen, sending its budget deep into deficit. The city’s annual budget was $12 billion, its an annual deficit was $1.5 billion — and it had an additional $2.5 billion due in short term debt. This was to say nothing of its many budget and accounting gimmicks, so corrupt and dishonest it could have come straight form Enron.

NYC was mere days from filing for municipal bankruptcy.

When Governor Carey asked Rohatyn for help, he stepped up as a matter of civic pride and public service. He created and ran the Municipal Assistance Corp, to issue those bonds Harry bought, and float the city a lifeline. As a state agency, over its 23 year lifespan, it sold $10 billion in bonds. That kept the city solvent as it worked though its fiscal crisis. Rohatyn served as chairman of the state-appointed Municipal Assistance Corporation from from 1975 to 1993. It dissolved itself in 2008. ‘Big MAC’ saved New York City.

The NYT obit can fill in the details of Rohatyn’s skills as an operator in both the private and public space. He earned the (not entirely flattering) nickname “Felix the Fixer,” but the formula he deployed eventually became a standard for salving a precarious municipality: He negotiated a 20% cut with city unions, slashing 50,000 jobs; he implemented a 3-year repayment moratorium of short-term notes; he got concessions from the union pension funds. He stood up to Mayor Beame, who was not happy with the loss of autonomy; He worked with Fed chair Arthur Burns to convince President Ford of the threat to the US credit rating and economy if its biggest city was allowed to go belly up.

Thus, Rohatyn orchestrated the federal loan guarantees needed to make the bonds affordable to the city.

Wait, how on earth can you say 14% bonds were affordable?

At the time, the 10 year was yielding 7%, on the way to almost 16% five years later. Inflation was double digits. 10-14% was not unreasonable for high-risk bonds. Even with the Uncle Sam’s guarantee, the success of MAC bonds was anything but assured.

By 1978, the crisis was passing, and Rohatyn devised a new four-year financing package. By the time Mayor Koch took office, the city’s budget was balanced. People in the know knew it was the hand of Felix Rohatyn that did the job:

“What distinguished him in both domains were his deft negotiating skills, his access to power and his understanding of it, his management of public perception (and of the journalists who shape it), and his adeptness not only with numbers but also with words. He had a genius for finding solutions that satisfied both political and economic imperatives.”

Fed aficionados mourned the passing of Tall Paul this week, but every bit as important, though perhaps less well known, was Felix G. Rohatyn. The country lost two giants this week, and we are all better off for their work, sense of noblesse oblige, and public service.

We could certainly use more private citizen with their sense of duty and obligation to their city and country.