• Bill Gates Warns Climate Change Is an Even Harder Problem Than the Pandemic: The world could use some big breakthroughs—a vaccine to combat coronavirus and innovations to mitigate climate change among them. The Microsoft Corp. co-founder speaks about his passion for both, the nightmare that is misinformation, and the difference between Elon Musk and Steve Jobs. (Businessweek)
• The Hodgepodge of ESG Investment Standards Sparks Controversy: MIT study underscores the confusion of ratings, then DOL cites that in proposing curbing sustainability factors in retirement portfolios. (CIO)
• The Fault, Dear Investor, is Not in Your Investments, But in You. And so, you must learn to manage yourself well, for then managing your investments would not be a tough ask. (Safal Niveshak)
• How big money is powering a massive hunt for alien intelligence: Breakthrough Listen, the $100 million, 10-year, privately funded SETI effort Siemion leads, is lifting a field that has for decades relied on sporadic philanthropic handouts.  (Science).
• How Are Institutional Investors Ever Going to Hit Their Return Targets? If you’re an investor and you’re not at least considering doing something about the bond portion of your allocation you’re not paying attention. (A Wealth of Common Sense)
• More Evidence For Mass Exodus To The ‘Burbs: the only region posting a quarterly gain for single-family construction during the second quarter was small metro suburbs. (Mortgage News Daily) see also How Does the Federal Eviction Moratorium Work? It Depends Where You Live: From state to state, and even judge to judge, a simple-sounding order by the C.D.C. on eviction cases is open to interpretation. (New York Times)
• ‘Germany looks like it’s still divided’: Stark gaps persist 30 years after reunification; Sobering studies for October anniversary show many in east feel like second-class citizens  (The Guardian).
• The QAnon Party? It’s Not a Conspiracy Theory Conspiracy movements usually end up entering the halls of power. And then they get absorbed. (Bloomberg)
• Emily Ratajkowski: Buying Myself Back: When does a model own her own image? And I have learned that my image, my reflection, is not my own. (The Cut)
• Chris Rock Tried to Warn Us In a candid interview, the comic discusses America’s summer of strife, Trump, blackface and his dramatic turn in the new season of “Fargo.” (New York Times).

U.S. Public Now Divided Over Whether To Get COVID-19 Vaccine 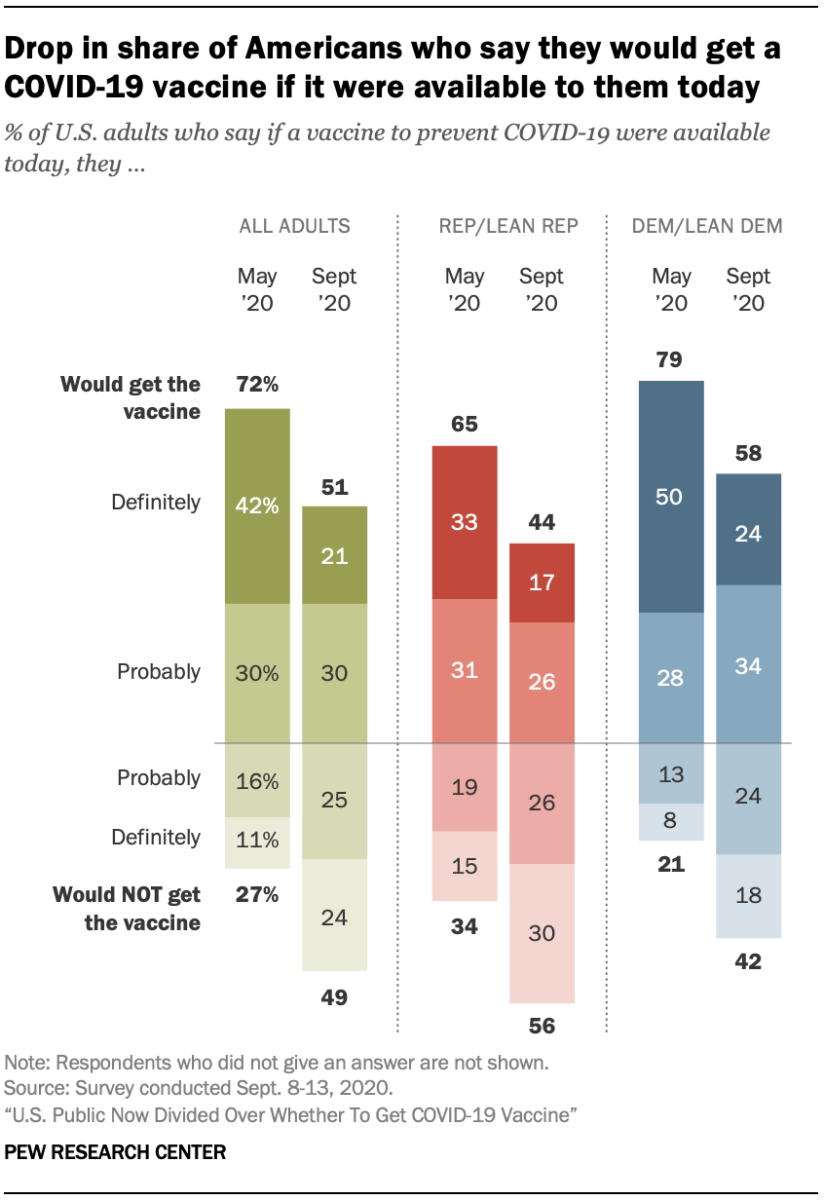 Debate: Does Private Equity Warrant a Spot in Retirement Accounts?