The weekend is here! Pour yourself a mug of French Brazil Daterra Sweet Blue RFA coffee, grab a seat in the sunshine, and get ready for our thought-provoking, longer-form, weekend reads:

• How Copart Is Making A Billion Dollars From A Junkyard Advanced technology is not only making cars safer and easier to drive, it’s also making them nearly impossible to repair. Cashing in? Dallas-based Copart and the father-and-son-in-law duo who pioneered selling wrecks on the Internet. (Forbes)
• The Secretive Town at the Center of the World’s Oil Market: Cushing, Oklahoma, set the stage for the Great Oil Price Crash of 2020. But was it really to blame?  (Institutional Investor)
• Inside the Chaotic, Cutthroat Gray Market for N95 Masks As the country heads into a dangerous new phase of the pandemic, the government’s management of the P.P.E. crisis has left the private sector still straining to meet anticipated demand. (New York Times Magazine)
• Investors, Put the Rest of the World on Your Radar The U.S. trounced foreign markets in the past 10 years, but now it’s time to start shopping abroad. Twenty stock picks from our international roundtable (Barron’s)
• America Just Can’t Get Enough Lysol Despite record-breaking, around-the-clock production, the disinfectant still vanishes from store shelves in a matter of hours—even before the latest Covid spike. (Businessweek)
• Should Big Pharma profit from Covid? Pfizer and Moderna will make billions from vaccines — luckily for us all (UnHerd)
• The Silenced Majority: Can America still afford democracy? Trump’s baleful theatrics have distracted us from the broader disintegration of the 20th-century interregnum, of which he is only a symptom. That process has much further to go, and will produce dangers greater than he. (Harper’s Magazine)
• Keep science irrational Is hard data the only path to scientific truth? That’s an absurd, illogical and profoundly useful fiction (Aeon)
• AOC’s Next Four Years: The history-making congresswoman addresses her biggest critics, the challenges that loom no matter who wins, and what she’s taking on next. (Vanity Fair)
• Why my guitar gently weeps: The slow, secret death of the six-string electric. And why you should care. (Washington Post)

Be sure to check out our Masters in Business interview this weekend with Dennis Lynch, Head of Counterpoint Global at Morgan Stanley Investment Management, running $130 billion. Several of the funds Lynch runs have doubled YTD in 2020. 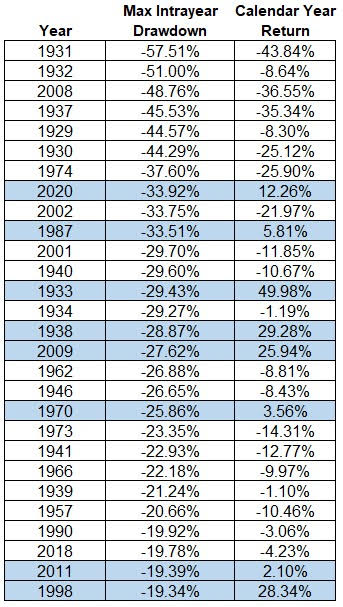 Source: A Wealth of Common Sense