• tHe fUtUrE oF mOnEy Don’t Forget Your Bitcoins: One thing that soothes this envy is reading about people who bought Bitcoin early for nothing and are now theoretical centimillionaires but lost their private keys and can’t access the money.  (Bloomberg)
• SPAC Mania Gives Early Investors Steady Returns With Little Risk Hedge funds score gains when blank-check companies rise after announcing deals to take startups public (Wall Street Journal)
• Who Said Art Is Only for the One Percent? Marian Goodman Gallery and MoMA are reviving interest in multiples — art produced in affordable editions for the ’60s middle-class. Now, some artists are taking up the cause.  (New York Times)
• Is Tesla a car company, or a casino? In 2020, Tesla delivered fewer than 500,000 cars, but it added almost $750bn to its market value. General Motors sold 2.5 million vehicles in 2020 and has more than $200bn in assets, but its market capitalisation is a small fraction of Tesla’s, at $62bn. At its current price-to-earnings ratio it would take Tesla 1,600 years to make as much money as the stock market has invested in it. (New Statesman)
• Why People Won’t Change Their Mind The concept of cognitive dissonance was developed by psychologist Leon Festinger in the 1950s. It arises when a person holds two different beliefs that are inconsistent with one another. The theory is that when this happens it causes our minds discomfort which we then seek to reduce. Whenever this inconsistency in our attitudes, ideas or opinions kicks in our default is to eliminate that dissonance. (Wealth of Common Sense)
• Where MAGA Insurrectionists and QAnon Followers Will Post Now Pro-Trump extremists need a new home after the Great Deplatforming. This is where they are going (Slate)
• Why Aren’t We Wearing Better Masks? Cloth masks are better than nothing, but they were supposed to be a stopgap measure. (The Atlantic)
• After Deadly Capitol Riot, Fox News Stays Silent On Stars’ Incendiary Rhetoric Fox News, the network that has helped shape conservative politics in the U.S. for more than two decades has yet to acknowledge how the heated rhetoric radiating from its shows and stars may have helped inspire the pro-Trump rampage. Comments from prominent Fox News hosts and guests had helped stoke the MAGA mob’s fury for the two months following the November elections. (NPR)
• A Black officer faced down a mostly White mob at the Capitol. Meet Eugene Goodman. For 85 tense seconds, Goodman tries to hold back dozens of rioters, twice retreating up a flight of stairs. Police experts say he wasn’t fleeing, but luring the mob away from the Senate chambers, where lawmakers were sheltering and armed officers — including one with a semiautomatic weapon — were securing the doors.(Washington Post)
• Tasting neutrinos: Flavor changing in the cores of exploding stars When the iron core of a massive star collapse, neutrinos of such high energy and in such numbers are created that the infalling material just outside the star’s core actually absorbs vast numbers of them; it helps too that the material rushing downward is extraordinarily dense and able to capture so many. The amount of energy this soul-vaporizing wave of neutrinos imparts on the matter is enough to not only stop the collapse but also reverse it, sending octillions of tons of stellar matter exploding outward at an appreciable fraction of the speed of light. (Syfy Wire)

Be sure to check out our Masters in Business interview this weekend with Adam Karr, portfolio manager at Orbis Investments and head of the US division. The firm, which manages $37B in assets, has a unique fee approach, where they only pay if they outperform, and refund fees when they underperform.

Is the vaccine roll out impressing or disappointing you? 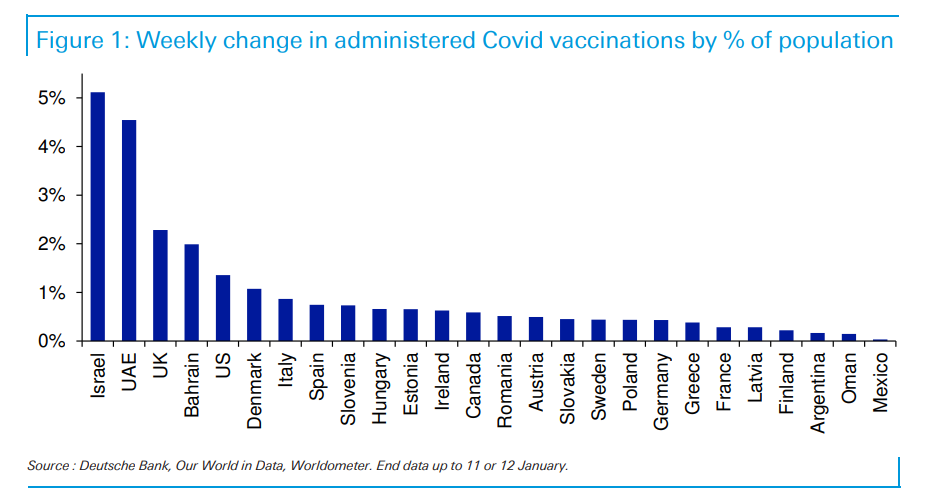 To learn how these reads are assembled each day, please see this.