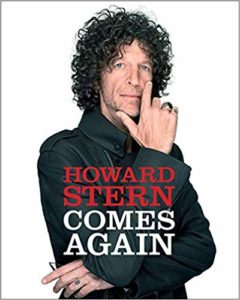 Howard Stern has a new book. He’s been talking it up for weeks. And now he’s confronted with the question of publicity. What should he do, where should he appear. And being the media-savant he claims to be, Howard only want to appear on shows that SELL BOOKS!

This is different from the pre-internet scorched earth paradigm. Used to be you told your publicity agent to get you ink everywhere, to create a feeling of momentum, but today there are so many messages, no one cares.

Especially when non-events get ink.

Like the re-release of Keith Richards’ album “Talk Is Cheap.” I’ll give credit to the publicity team, they got placement in major newspapers, where the aged target audience still goes, but the truth is most of the audience didn’t want the project the first time around, it was seen as a middling effort, one step above a stiff. If it wasn’t Keith, no one would remember it. And at this point, almost no one does. As for rebuying it… Are you kidding me?

And the King of all Blacks called to tell Howard that he should appear on “Real Time,” because that show sells books. And that was a good point. Because Bill Maher dedicates a whole segment to authors. Then again, if you’re not selling a political book…

Of course you want reviews in book review sections… Then again, is there where the Howard Stern audience lurks?

You’ve got to be smart.

And you’ve got to self-promote.

This is what old artists agitate against and young artists understand. You preach to your audience and if you do something worth spreading, they will.

I know, I know, this is contradictory to expectations. You want to go worldwide.

But no one is that big anymore. We live in niche culture. Be happy anybody cares at all. You create your vertical and monetize it.

That’s the Billie Eilish story. The videos were monstrous before this initial album came out. She was working it. You’ve all got to work it.

And sure, phenomena come down the pike now and again, but it’s rare these days. And little sticks.

So by talking about his book on his show every day Howard Stern is creating his own excitement. And today everybody has a platform, everybody should be in contact with their fans on a regular basis. It’s part of your job. The data is the most important thing.

Nothing is as powerful as e-mail.

But if you tweet and Instagram IT MUST BE YOU! If you’ve got a company doing it either you’re dead or your career is about to be.

Furthermore, books are one of the few things that still require an entry fee. As do movies. But music and TV come as part of a bundle, i.e. Spotify and Netflix. You have to convince someone to listen and watch. Not one of the tracks on Richards’ reissue of “Talk Is Cheap” has broken a million streams on Spotify. Some are in the very low four digits. What was this about?

Don’t count on the media to be an arbiter. The media shovels product on a daily basis, they don’t care if it sticks. Keith Richards himself would have to promote the record, and he’s too big to do this. So why do it at all?

And even if Howard Stern hits number one on the NYT chart, most people will not read his book. It’s not like the nineties, when we had a small culture and were all interested in the same things. Today, even your friends have not seen the same TV shows. But if Stern’s fans truly believe the book is worth a read by non-fans, they’ll tell them. Stern is self-promoting and he’s activating his user base. That’s how you do it today.

But you can survive. You can make money.

It’s just that most people will have no idea you exist.