By November 2008, the Global Financial Crisis, which originated in the residential housing market and the shadow banking system, had begun to turn into a major recession, spurring the Federal Open Market Committee (FOMC) to initiate what we now refer to as quantitative easing (QE). In this blog post, we draw upon the empirical findings of post-crisis academic research–including our own work–to shed light on the question: Did QE work?

Unconventional Monetary Policy and Quantitative Easing
First things first: What does the term QE describe? QE is part of what is now referred to as unconventional monetary policy. Over the two decades prior to the Global Financial Crisis, central banks mainly conducted monetary policy through two instruments. First, a central bank would set the short-term money rate—in the United States, the fed funds target rate. Second, the central bank would try to “manage expectations” by giving the public a sense of where the future policy rate would be through its official communications with the public. This way of conducting monetary policy is based on the premise that a lower (expected) interest rate will lead to an expansion of economic activity, enabling the central bank to minimize economic volatility over the course of the business cycle and to fulfill its (explicit or implicit) mandate to achieve price stability and maximum employment.

When the nominal interest rate is close to zero, this way of supporting the economy becomes less effective; should a central bank consider negative nominal rates to be an option, the effectiveness of the tool is still limited, since nominal rates can only be pushed so far below zero. Alternatively, the central bank can attempt to support the economy by buying large amounts of financial assets to make risky assets more liquid and/or lower longer-term interest rates. A form of unconventional monetary policy, these large-scale asset purchases (LSAPs) are often simply referred to as QE.

After the financial-market disruptions experienced during the summer of 2007, the FOMC started to lower the fed funds target rate. However, the fed funds target rate lost its power to provide further stimulus to the economy when it reached the zero lower bound in December 2008 (see the chart below). Over the next several years, the Fed conducted three rounds of LSAPs: 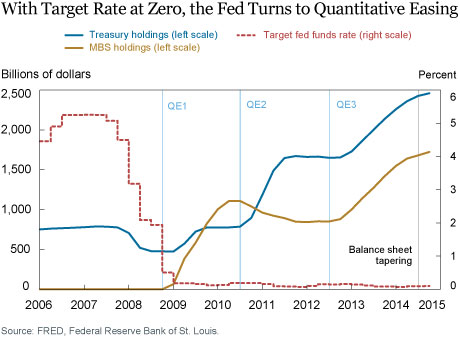 Did QE Work? What the Data Suggest
The three rounds of QE were controversial at the time, and they remain so today. Some observers have argued that QE creates new risks for financial stability or inflation but is not helpful in fulfilling the Fed’s mandate to achieve price stability and maximum employment. Using empirical data to test such claims is challenging, since it is difficult to draw causal inferences from macroeconomic events. This conundrum is described well in Ben Bernanke’s memoir The Courage to Act, where he writes, “We can’t know exactly how much of the U.S. recovery can be attributed to monetary policy, since we can only conjecture what might have happened if the Fed had not taken the steps it did.”

With this caveat in mind, we nonetheless discuss a selection of empirical findings that now, ten years later, give us some sense of how QE may have affected the real economy.

1. Yields: QE had a large impact on the yields of Treasury and mortgage-backed securities and the effect varied across the different rounds of QE. These findings are presented by Krishnamurthy and Vissing Jorgensen (2011, 2013), who, among other things, illustrate that QE1 and QE3 decreased MBS and Treasury yields. However, the authors also show that MBS yields were more strongly affected (across both rounds) and QE3’s effect on MBS yields was much smaller than that of QE1. Moreover, the authors show that QE2, which consisted only of Treasury purchases, had very weak effects on yields.

2. Mortgage refinancing: Building on this finding, Di Maggio, Kermani, and Palmer (2018) show that when the Fed bought MBS during QE1, it led to a boom in the refinancing of existing mortgages, in particular those types of mortgages that are eligible for purchase by the Fed. Refinancing an existing mortgage at a lower interest rate increases the respective household’s net worth as its debt burden is decreased. Increased net worth, in turn, allows households to increase their consumption. QE can thus stimulate aggregate demand by making refinancing of mortgages attractive. However, for this channel to be active, household leverage becomes a crucial factor. In particular, Beraja et al. (2018) provide evidence that in areas in which households have higher leverage, and are hence more likely to owe more than their homes are worth, this channel is impaired.

3. Bank lending: Another important finding is presented by Darmouni and Rodnyansky (2017), who study the effect of QE on bank lending more generally. The authors show that banks that owned more MBS prior to QE saw faster growth in loans to firms and households than banks that had little or no MBS holdings. This indicates that, by purchasing MBS, the Fed was able to stimulate additional credit provision by banks. In particular, the authors provide evidence that the credit stimulus stems from QE making banks’ assets more liquid.

Combined Effects on Real Economic Activity
The question that then arises is whether the additional credit provision resulted in additional real economic activity, thereby helping to fulfill the Fed’s mandate. In our paper, we build on the existing research discussed above and ask whether the additional lending from banks has real effects, such as an increase in employment, consumption, or investment. Our empirical strategy exploits the fact that some banks are more affected by the Fed’s asset purchases than others, as suggested by Darmouni and Rodnyansky (2017). We also draw on the fact that bank activity varies geographically. Given that employment and consumption data are available at the regional level, we can hence construct a link between bank lending and real activity. We track which regions received most of the additional credit after a given round of QE and study how credit growth correlated with change in local consumption, investment, and employment.

Our paper reveals that the impact of QE1—an increase in commercial banks’ mortgage refinancing activity—had effects on local consumption and employment in the nontradable goods sector, but no overall employment effects. In contrast, QE3-driven increases in commercial and industrial lending and home mortgage originations translated into sizable growth in overall employment. The main results are best illustrated in the chart below, which plots the average growth of employment in two sets of counties: those whose banks had high MBS exposure and those whose banks had low MBS exposure. While there is virtually no differential effect after QE1 and QE2, there is a substantial difference after QE3. 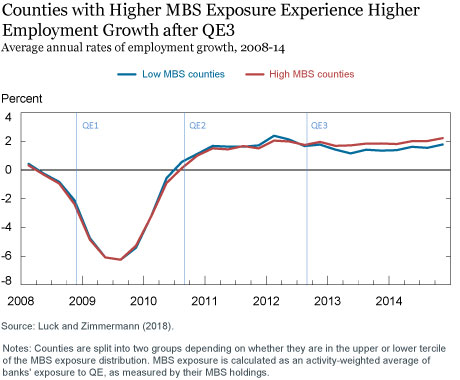 To Sum Up
Altogether, the empirical studies of recent years suggest that large-scale asset purchases can affect real economic outcomes via a bank lending channel. Like an interest rate cut in a conventional monetary policy setting, QE can lead to additional bank lending, which in turn translates into additional economic activity.