Last week’s big story about Vanguard Group’s patented tax dodge raised some interesting legal and tax issues. Our charge today is to try and take a deeper look at what Vanguard has been doing and why.

Let’s start with some basics about the differences between mutual funds and exchange-traded funds, or ETFs. The obvious feature is that open-end mutual funds are priced once a day based on the prices at market close, while ETFs (and closed-end mutual funds) trade all day. This is a remnant of the pre-computer era, when it would have been impossible to get an instantaneous quote on all of the underlying holdings in any given fund during market hours. If you have to execute buys or sells by hand, then end-of-day pricing data was what you used.

Investors in mutual funds buy or sell them directly from the mutual-fund companies themselves; ETF purchasers simply go to the market and buy ETFs at the quoted prices. This simple but important structural legal difference has significant tax ramifications for fund investors.

Mutual funds (and most ETFs) are governed by the Investment Company Act of 1940. This legislation treats them like a pass-though company. When a mutual-fund investor wants to sell, the fund sells shares of (often appreciated) stock to generate cash. This often creates a taxable capital gain. Since most funds operate as simple pass-through vehicles, those tax liabilities from the gains accrue to investors in the fund — even to holders of the fund that were not sellers.

It seems inherently unfair that sellers of a fund are the ones who generate capital gains for non-sellers. Thus, the non-selling holders owe capital-gains taxes based not on when they decide to sell, but upon the vagaries of random fate — when others decide to sell.

ETFs avoid the tax issue because, unlike traditional mutual funds, they are not direct buyers or sellers of shares on behalf of a pool of investors. 1 Instead, when a buyer of an ETF comes to market, a so-called authorized participant — a market maker with a special contract with the ETF provider — will create a block of shares of the ETF by buying all of the holdings in the underlying ETF. They then hand this off to the ETF issuer, and receive newly created ETF shares, which they can then sell to the market. When a seller comes along, it’s the same process in reverse.

Here is the sexy part of this: During creation or redemption, the fund issuers themselves aren’t buyers or sellers. Instead, they exchange shares of the ETF for shares of underlying stocks (creation) or they exchange shares of stocks for shares of the ETF (redemption). These are in-kind transactions, swapping one tradable security for another. It is not considered a cash transaction — it is effectively “barter” — so the beauty of this to the ETF investor is there’s no pass-through capital-gains tax bill.

For this reason, ETFs have a huge structural advantage over traditional mutual funds. Not being hit with capital-gains taxes on funds you didn’t sell is part of the reason ETFs have seen such enormous growth. According to BlackRock Inc., the world’s biggest asset manager, at the start of the century ETF assets amounted to less than $100 billion. Today that figure stands at $4.7 trillion. The company estimates that ETF holdings will increase fivefold during the next decade.

Given all of this, what did Vanguard Group do that was so innovative?

Instead of just creating a new family of ETFs, it decided to create them as a new share class within its existing mutual funds. It was such an inventive solution to the capital-gains tax problem that Vanguard and former Chief Investment Officer Gus Sauter were awarded a patent. 2

ETF buyers get access to Vanguard’s legendary cost-consciousness. The new products didn’t have the usual startup struggles of high overhead costs spread out among few owners. Instead, they were instantly part of an enormous pool of existing assets. Thus, they received the full benefits of Vanguard’s economies of scale, including operating and trading costs. 3  Not only that, but Vanguard got to tout the longstanding track records of the new ETFs. They were, after all, identical to the rest of the asset pool — just a new class of the same investments.

The biggest advantage was the deferral of capital gains taxes for mutual-fund holders. As the company itself noted, “To meet cash redemption requests from non-ETF shareholders, Vanguard can sell high-cost-basis securities to generate a capital loss. These losses offset any current taxable gains and, if not exhausted, can be carried forward to offset future capital gains — a recycling that is not likely within stand-alone ETFs.” The ETF share class with a corresponding mutual-fund class effectively swaps shares to “wash out” or offset capital gains in the mutual fund.

Note that this is not tax avoidance, but rather tax deferral— investors must still pay taxes on any gains made from selling the ETF shares for more than they paid. But fund investors get to make this decision themselves, based on when they choose to sell — not when someone else does.

Vanguard’s corporate structure as a mutual owned by its shareholders is unique in the asset-management business. So too is this ETF as a share class. It’s no wonder it won a patent.

1. Because they are governed by the same basic rules, ETFs could theoretically distribute capital gains to investors. This is not common, but it is possible.

2. Vanguard filed for patent protection in 2001; that patent will expire in 2023; it also was awarded six related patents, which are due to expire in 2021.

3. It also allowed more active Vanguard traders (an oxymoron, I know) to convert their Vanguard mutual funds to a Vanguard ETF at no cost.

I originally published this at Bloomberg, May 6 2019. All of my Bloomberg columns can be found here and here. 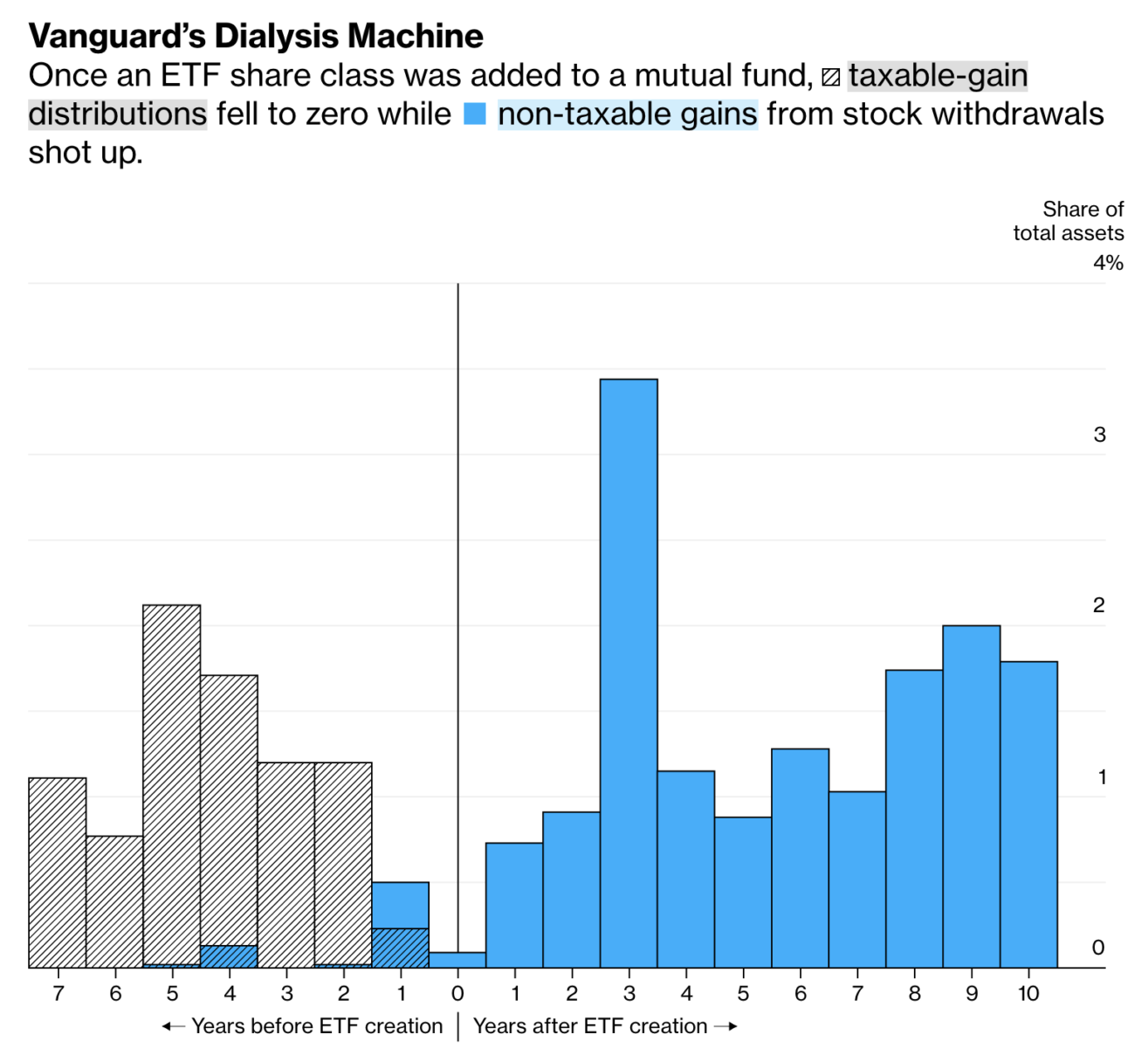