40 years ago today, the most infamous edition of BusinessWeek was published. “Death of Equities” it declared, with a subhead read, “How inflation is destroying the stock market.”

Then owned by McGraw Hill, this edition of BusinessWeek was little noticed at the time. (full story here). The new BusinessWeek — bought by Bloomberg for $1 in 2009 — has a new story out on that issue: It’s Been 40 Years Since Our Cover Story Declared ‘The Death of Equities.’ Peter Coy adds “people never tire of reminding us of the bull market” that followed:

“We’re still getting grief for a cover story that appeared in BusinessWeek—the ancestor of Bloomberg Businessweek—four decades ago. On Aug. 13, 1979, the headline on the cover was “The Death of Equities: How Inflation Is Destroying the Stock Market.” Three years after that article appeared, the stock market hit bottom and then began a remarkable resurgence. The total return on the Standard & Poor’s 500-stock index since its 1982 low, with dividends reinvested, has been nearly 7,000%. Not bad for a corpse.”

Almost 15 years ago, I wrote I wanted a copy (WANTED: August 13, 1979 Business Week); I am still waiting for someone to offer one for sale.

Note most people still misunderstand the magazine cover indicator. This one is no different.

As much as we slag on the infamous cover, the column itself included this prescient paragraph:

“To bring equities back to life now, secular inflation would have to be wrung out of the economy, and then accounting policies would have to be made more realistic and tax laws rewritten. For better or worse, then, the U.S. economy probably has to regard the death of equities as a near-permanent condition—reversible some day, but not soon.”

Its fair to say that all three of those structural issues occurred: Secular inflation was killed by Paul Volcker; accounting policies were changed; tax laws were rewritten to be much more friendly to capital. That helped set the stage for the bull market of the 1980s and 90s . . . 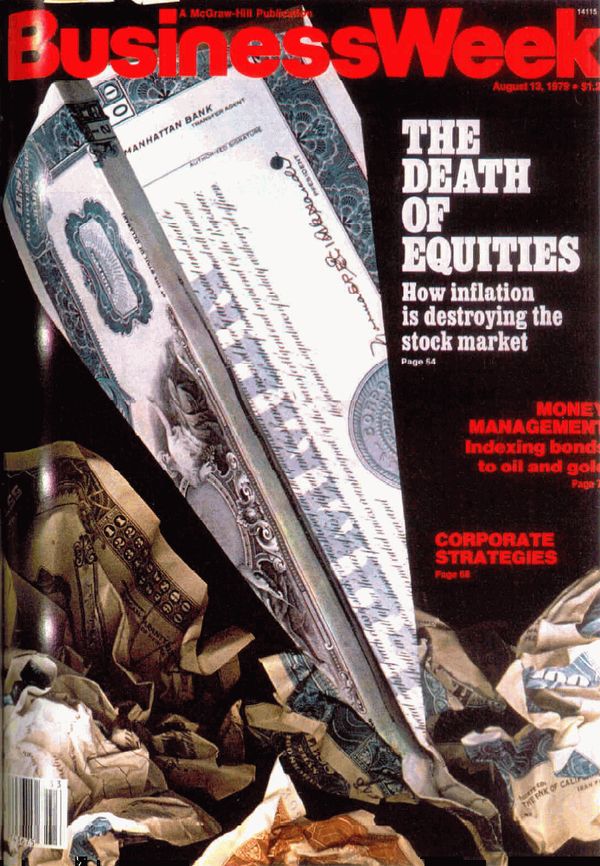