• What a Yield-Curve Inversion Really Says About the U.S. Economy (Bloomberg Businessweek)
• Taylor Swift is smart enough to not let her shows sell out (Quartz) see also Taylor Swift hits high note in battle against ticket touts (Financial Times)
• Manufacturers Want to Quit China for Vietnam. They’re Finding It Impossible. (Wall Street Journal)
• A President at War With His Fed Chief, 5 Decades Before Trump (New York Times)
• Remainers can no longer take yes for an answer (Sky News)
• It Is Criminal That We Aren’t Borrowing Trillions to Fix the Country Right Now (Slate)
• How Amazon and Silicon Valley Seduced the Pentagon (ProPublica)
• A crack in Trump’s ‘poorly educated’ base? (Washington Post)  see also Anthony Scaramucci and the 9 biggest 180s on Trump, ranked (Washington Post)
• Why Is Joe Rogan So Popular? (The Atlantic)
• His bat handle says what?! 10 of the most hilarious and unforgettable baseball cards (ESPN)

Be sure to check out our Masters in Business interview this weekend with Ron Williams, former CEO of health insurance giant Aetna and author of Learning to Lead: The Journey to Leading Yourself, Leading Others, and Leading an Organization.

How Are U.S. Stocks Doing? The Answer Comes Down to Size 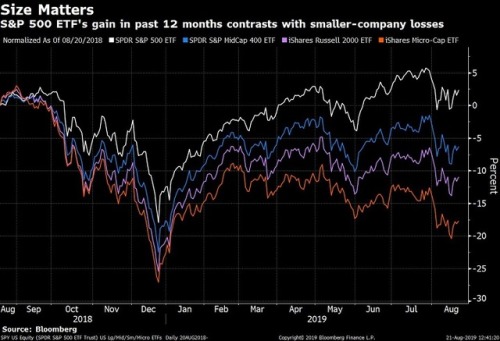 Overstock Saga Ends With a Whimper . . .