Gene Fama’s discussion earlier this week made me revisit some ideas on outperformance and the zero sum game. In particular, the weird phenomena of “Lottery Ticket Mentality” that seems to be infecting the psychology of an unhealthy swath of professional investors.

Equities are fully or even richly valued, especially large U.S. growth. Fixed income, be it Treasuries, Corporates or TIPs, are not yielding very much. Cheaper borrowing costs have already juiced earnings, helping to drive stocks higher, but lowering future returns.

In this environment, some people seem to be more comfortable playing the longer odds and lower probability scenarios. Embracing more risk goes the thinking can generate, more reward. The lower cost of capital is making alternatives like Private Equity and Venture Capital seem like strong options — not absolutely attractive, just relatively so.

Reminds me in someways of the Powerball phenomena.

There are lots of states lotteries have their own lotteries, but you have to hand it to the Multi-State Lottery Association: To sell lottery tickets, they want to push people’s emotional hot buttons. So Powerball is in 44 states and the prizes can scale well over a billion dollars. This attracts lots of “Players” in the gambler’s parlance to buy tickets.

We can break the Powerball players into two prototypical types:

One group is, for lack of a better word, innumerate. They hope against impossible odds (which many apparently do not understand) that they will win a giant cash windfall that will set them up for the rest of their lives. This group tends to be poorer, less well-educated, and often in more precarious financial circumstances. They spend a surprisingly disproportionate percentage of their income on lottery tickets.

If the first group is somewhat desperate, the second are here for the cheap entertainment. Spending two bucks buys a modest amount of entertainment, as they, their friends and family discuss what it would be like to be fabulously wealthy: The vacations, the houses, the planes, the cars, the wanton irresponsible spending, the freedom from any monetary concerns. Ignore for a moment that none of this is reality; what matters here is the idea that when the Powerball runs up into the 100s of millions or even billions, $2 buys them some time in the holodeck of their imagination, living however briefly, a life on unfathomable luxury and in their minds, happiness.

Now let’s apply this to investing: 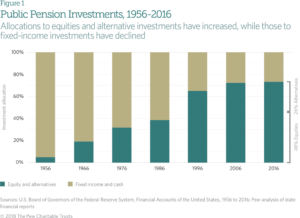 I suspect that many investing professionals who are running foundations and endowments and pension funds of all sizes suffer from a similar problem. They seem as a group to be embracing lots of risk, without fully understanding the math behind it. They own much more PE/VC/HFs than they did when expected returns were higher. They are buying expensive, and for the most part, under-performing alternatives. They seem to understand that expected returns are lower. But rather than accepting that reality, they are instead desperately hunting for higher returns, and if Stocks & Bonds wont deliver that, then they will look elsewhere.

Maybe I have this whole thing backwards; maybe I am missing something important that will lead to Private Equity delivering outperformance for all of these giant pools of capital: Foundations, endowments, pension funds, retirement portfolios, etc. Some percentage of them surely will be winners. (10%? 20%?).

The problem is that the distribution of winners and losers in this space is very much a “Winner Take All” phenomena.  I suspect when this era is over, and we look back at returns of these risk embracing institutions, lots of people are going to be disappointed . . .