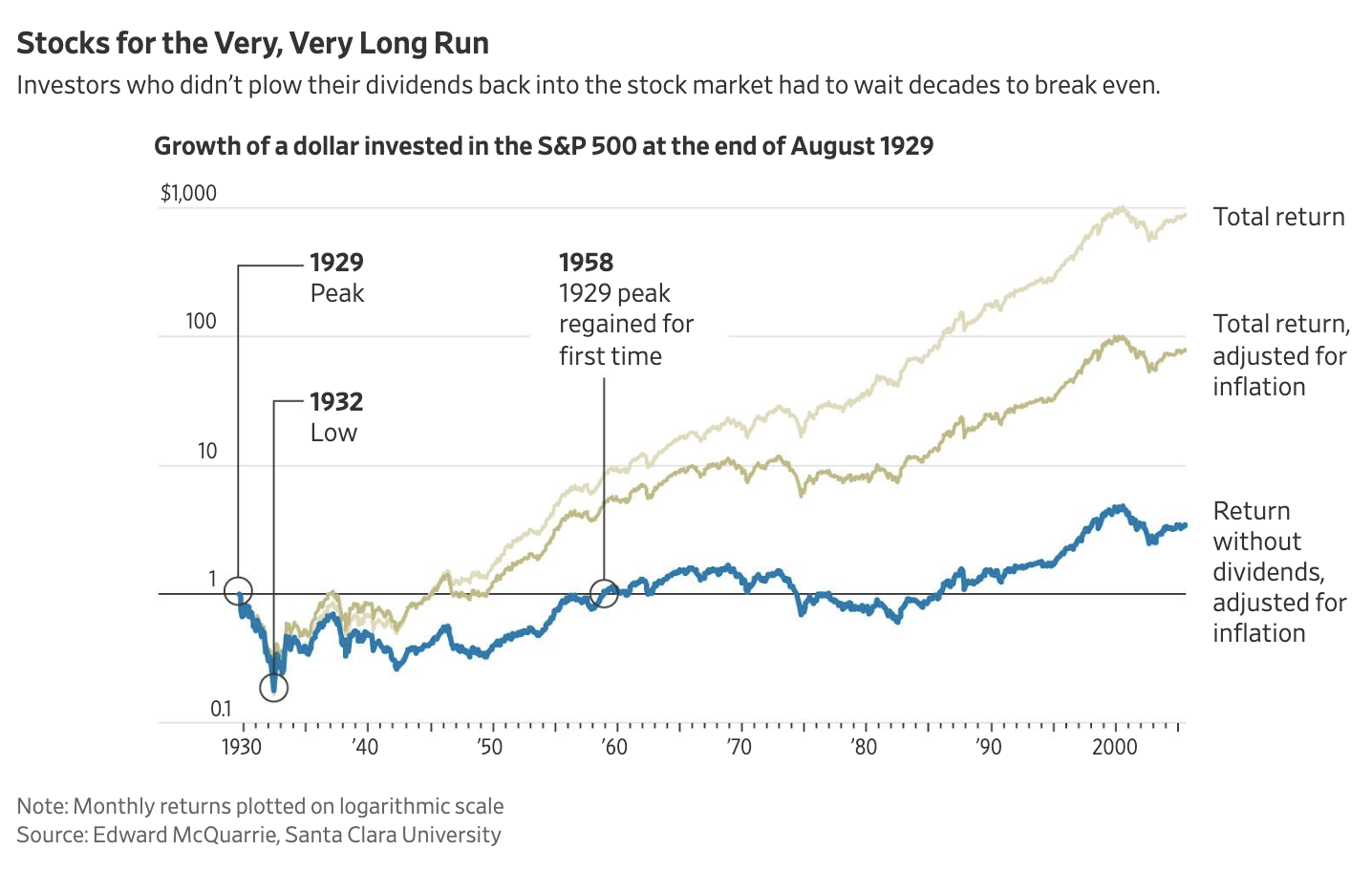 Occasionally, we need to stop and smell the roses.

At dinner Monday night with some of my crew (Jonathan, Brian) and a few folks from DFA (David, Caroline, Hunt, Robert), the issue of total returns versus price-only returns came up. The discussion turned to when markets return to breakeven after a major drawdown.

Admission: I’m guilty of looking at just price when it comes to indices. Examples include: “In 1966 the Dow kissed 1000, not to permanently surpass that mark until to 1982.” Or perhaps the best example, the Dow Industrials 1929 crash. We all know the numbers: That 81% DJIA crash took 25 years to get back to break even in 1954.

Jason Zweig reminds us of two very important aspects of these price-only discussions: First, dividends are a very large part of returns. Perhaps not as much as they once did, but still very significant. Consider that on a price-only basis, that 1954 number is somewhat misleading. Add dividends back in, reinvesting them as you go back into the Dow — and you miraculously shave a decade off that break-even point — it occurs in 1944, instead of 1954.

But the even more intriguing issue is the mechanical process of how dividends get reinvested today: We take it for granted that we can log onto any brokerage account, check a box marked  “Reinvest dividends” and simply have those divvies roll into your SPY or DJIA Mutual Fund or ETF. It automagically takes those quarterly distributions, and reinvests them back into that holding on a regular basis. This occurs even on a partial share basis, if needed.

Looking at price-only indexes creates a potentially misleading understanding of how long it takes to get back to break even post-crash. It is also a reminder that dividends were (and in some sectors, still are) a big part of your total investment returns.

We make a mistake if we take for granted the how easy, cheap and friction-free something as once complex as dividend reinvestment has become. Remember that the next time someone tells you how badly the markets are rigged . . .

See Also:
There has never been a better time to be an individual investor
Tadas Viskanta
Abnormal Returns February 14, 2012
http://bit.ly/2Cl9oYx

The Weaponisation of Context