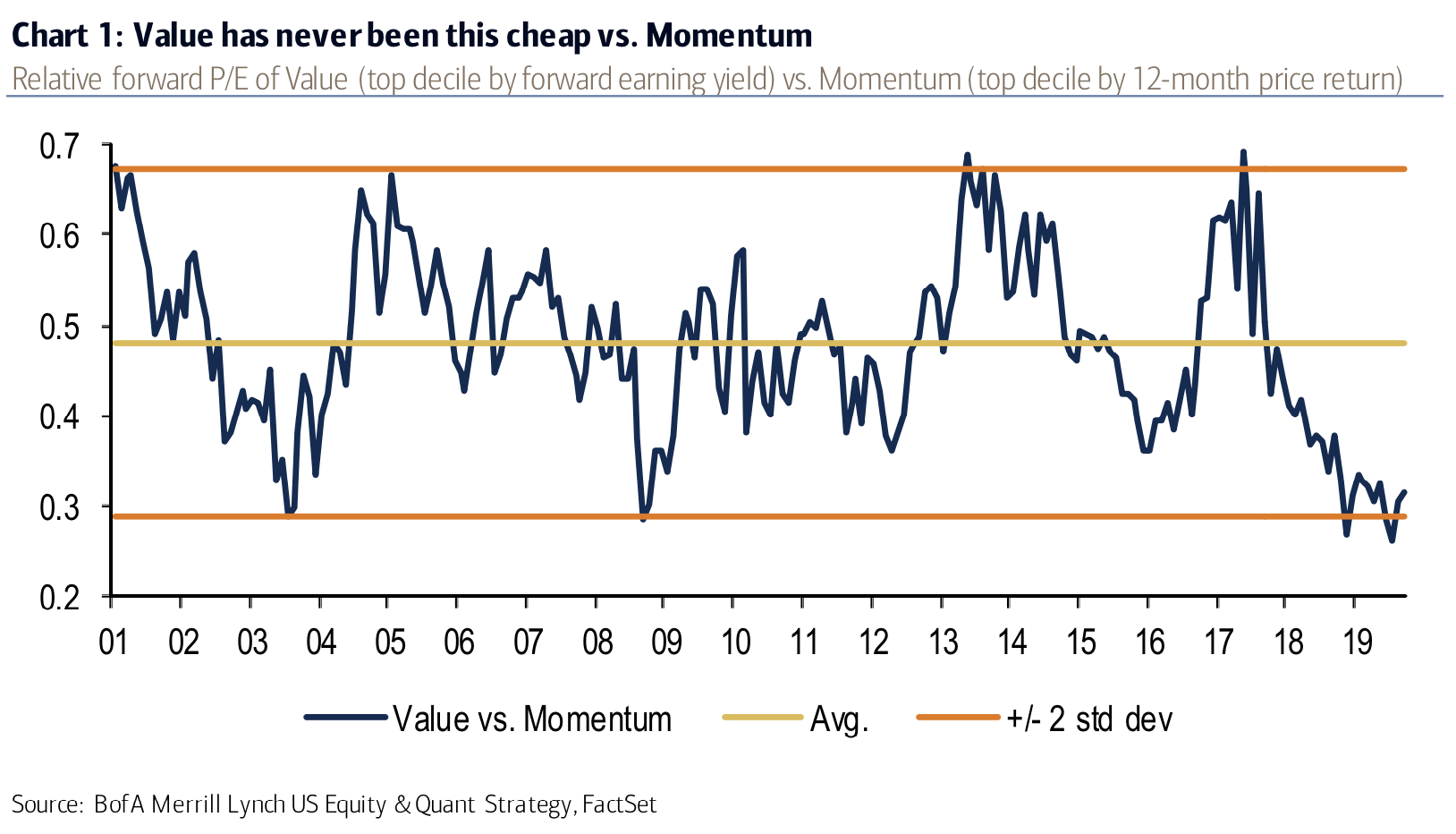 The chart above is quite amazing. It comes to use from Savita Subramanian, who runs the Equity & Quant group at Bank of America Merrill Lynch. She shows how inexpensive Value stocks are on a relative basis to Momentum stocks. (Valuation metrics after the jump).

Subramanian’s takeaway? Value stocks as a group are as cheap as they have ever gotten. “The only time in history that Value has gotten this cheap was in 2003 and 2008, when Value outperformed Momentum by 22ppt and 69ppt, respectively, over the subsequent 12 months.”

But that 20 year period shown in the chart above  — and the past decade plus  — is why Institutional Investor so eloquently explained the challenges of buying cheap equities: Value Investing Sucks!

“Value stocks — traditionally defined as companies that trade at low prices relative to characteristics like earnings and book value — have largely underperformed since 2007, trailing throughout an explosive bull market for growth stocks, rapidly growing companies with rising valuations.”

The underlying reality is that Value outperforms Growth and Momentum because it is so painful to bear for long periods of time; that is literally the source of the Value premium. If it were comfortable and easy, then everyone could do it! Instead, it is difficult to tolerate, discomfortable as FAANG FOMO rears its head. That discomfort is why Value eventually beats Growth (key word: eventually).

If Subramanian is correct, probabilities now favor a longer rotation into Value/out of Momentum: “Value has never been this cheap vs. Momentum, with the relative forward P/E of Value vs. Momentum at two standard deviations below the average. The only time in history that Value has gotten this cheap was in 2003 and 2008, when Value outperformed Momentum by 22ppt and 69ppt, respectively, over the subsequent 12 months. (Emphasis added)

How Much Should Fair Value Matter to Investors? January 5, 2018

Yardeni: 67% of Buybacks Are Used to Offset Employee Stock Dilution