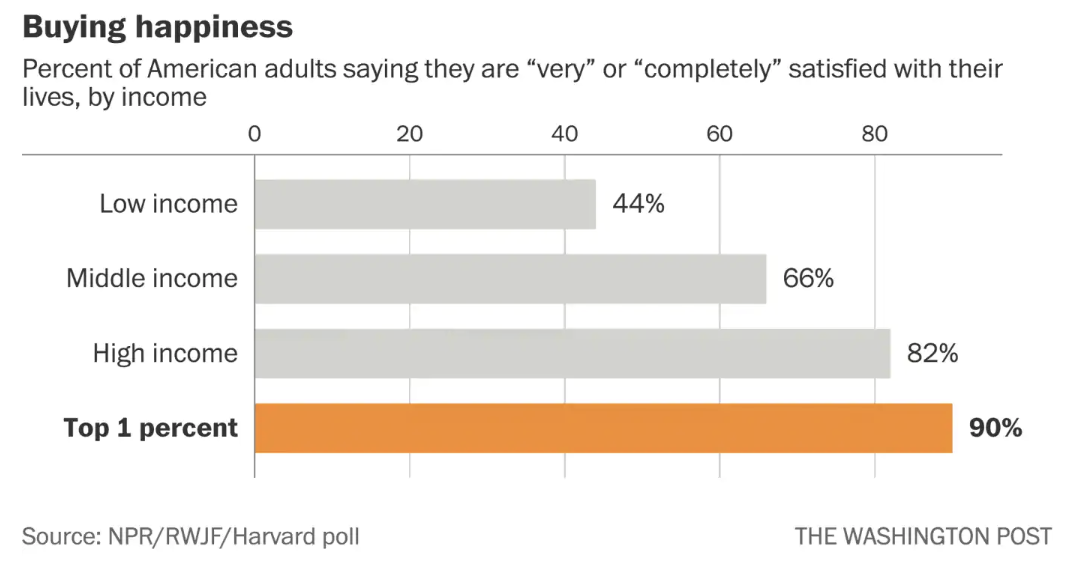 The past week, I have been writing about making smarter spending decisions, and also ignoring those who give lazy, bad advice. (See this, this and this).

There is a methodology underlying the three rules I laid out and why people should spend their money more intelligently. The chart above might help to explain why.

Money buys happiness, but only up to a point. A 2010 study by Daniel Kahneman and Angus Deaton found having more money was associated with better emotional well-being, but after a specific point (about $75,000) there is a rapid drop off. Once your basic security needs are met — housing, nutrition, healthcare — the happiness measures to earning more money become smaller (though being wealthy does add to life expectancy).

But happiness isn’t everything: There are other measures of well being, such as life satisfaction. Kahneman notes that “happiness and satisfaction are distinct. Happiness is a momentary experience that arises spontaneously and is fleeting. Meanwhile, satisfaction is a long-term feeling, built over time and based on achieving goals and building the kind of life you admire.”

Here is where things get interesting: Instead of asking people if they are happy and comparing that to their income level, a new survey by the Robert Wood Johnson Foundation asks respondents about their life satisfaction. As it turns out, happiness has a “satiation point” that tails off despite more money. But “life satisfaction continues to rise with income through at least the $500,000-a-year threshold.”

I suspect there are lots of subtle differences between the monied set and everyone else: Control of their time and schedule, a sense of optimism for their children, and an expectation that their assets will give them options in a changing environment, both economically, geopolitically and even climate related.

Money is a tool, one that can buy you control, give you more time and creates options. We should not be surprised that (at least up to a point), more money leads to higher life satisfaction.

Here are the key findings from RWJF: