To conservatives, corporations are the pinnacle of capitalist development. That’s the reason the American right affords them such deferential treatment in terms of taxation and government regulation. Any such restraint on their market sovereignty, laissez-faire conservatives argue, will likely kill the goose that lays golden eggs. In reality, corporations wouldn’t exist in a pure free market; they are and always have been creatures of the state.

Corporations have existed since Roman times, but until the Industrial Revolution they usually took the form of guilds—organizations of skilled laborers. The essential feature of these early corporations was their monopoly status. One had to belong to a guild or work for a designated corporation to engage in particular businesses. Well into the modern era, corporate charters were granted by kings and parliaments to confer monopoly status on trade with particular countries.

Until the early part of the nineteenth century, the corporate form of business organization was rare. Most businesses were partnerships or sole proprietorships. Since they tended to be small, they did not need one of the corporation’s greatest benefits: the ability to raise capital through stock offerings, which was facilitated by the corporation’s greater longevity. The rise of the railroads, which required more private capital than had ever before been raised, was a key force behind the rise of the modern corporation.

Still, the corporation remained a privileged institution that could only be created by legislative charter, often for a public purpose such as building turnpikes or canals. Furthermore, corporations of the early nineteenth century in both the United States and Britain lacked an important characteristic of today’s corporations: limited liability. Because of that, a corporation’s liabilities may only be paid out of corporate assets; creditors and others with claims against a corporation may not go after the personal assets of shareholders, whose losses are limited to the value of their shares. By contrast, partners and sole proprietors were personally liable for business debts.

Limited liability became another privilege granted by the state to corporations, and this innovation also spurred on their modern development. In addition, states eased the requirements for obtaining corporate status. Instead of requiring a legislative charter, the creation of a corporation was rubber-stamped by bureaucrats.

Nevertheless, well into the twentieth century, the idea was that corporations were only permitted to exist and enjoy benefits unavailable to other forms of business because they served some sort of public purpose. Corporations commonly deferred to the interests of the communities in which they operated and to other stakeholders—including customers, employees, and suppliers, in addition to shareholders and communities. Defenders of the rising new corporate order adopted this broader notion of a corporation’s true client base as a key justification of corporations’ greatly expanded privileges.

This all began to change in the 1970s. In an influential article published in The New York Times Magazine on September 13, 1970, University of Chicago economist Milton Friedman fired the first salvo against the traditional view of corporate responsibility as being divided among various stakeholders. He argued instead that the corporation has one and only one responsibility: to the shareholder, who is the owner of the business. In Friedman’s view, “ownership” confers an absolute right to use whatever property is owned in whatever way the owner chooses, subject only to the constraints of law. Since shareholders are the owners, they are entitled to 100 percent of the profit, minus taxes. It therefore followed for Friedman that any benefits the corporation confers upon nonshareholders that do not serve the ultimate purpose of profitability are, in essence, theft of money that belongs to the shareholder. Friedman believed that narrowing the focus of the corporation to the single goal of maximum profitability would increase productivity and efficiency, and thereby raise economic growth and improve social well-being to the greatest extent that corporations could do so.

In an extraordinarily important article in 1976, University of Rochester economists Michael Jensen and William Meckling amplified the Friedman doctrine. They argued that shifting the focus of management solely toward the maximization of shareholder value offered a solution to the long-standing problem of ownership and control of the big corporation.

Since at least the 1930s, economists and legal scholars had been concerned about the new powers wielded by large modern corporations. Under the modern model of corporate governance, shareholders had little control over the assets that they owned. In reality, they were controlled entirely by corporate management. In theory, managers were just employees working for the shareholders, who were represented by the corporation’s board of directors to look out for their interests. But in practice, boards did a poor job of doing so. Being a board member was not a full-time job, and boards might only meet a couple of times a year and were often hand-picked by senior management. Moreover, boards lacked the information and detailed expertise necessary to really understand what the company was doing on a day-to-day basis, and usually just rubber-stamped whatever the CEO was doing, as long as he was doing reasonably well.

The elimination of managerial discretion, as Friedman, Jensen, and Meckling advocated, together with other measures designed to force management to concentrate only on profitability, would align management’s objectives with those of shareholders. They argued further that this realignment could be measured precisely by share prices and rates of return. To further harmonize their interests, boards needed to adjust managerial pay to more directly reflect profitability goals. Instead of paying them a salary like all the other employees, boards began granting stock options to senior management so that higher profits and share prices would automatically translate into higher compensation.

As with many ideas that look good on paper but don’t work in practice, the decision to encourage management to put profits first and tying its compensation to near-term stock prices had serious downsides. It made management very short-term focused, often causing it to put the corporation’s long-term interest at risk, a point made as early as 1980 by Harvard Business School professors Robert Hayes and William Abernathy. It also encouraged stock price manipulation through share buybacks.

In a September 30, 1986, Wall Street Journal article, management guru Peter Drucker warned that the totally profit-centric corporation was undermining its own viability and legitimacy. “Corporate capitalism promised that large corporations would be run in the interests of a number of ‘stakeholders,’” he said. “Instead, corporate managements are being pushed into subordinating everything (even such long-range considerations as a company’s market standing, its technology, indeed its basic wealth-producing capacity) to immediate earnings and next week’s stock price. A Marxist might well say that corporate capitalism has turned into ‘speculator’s capitalism.’”

This problem was exacerbated by 1993 legislation limiting the tax deductibility of managerial pay to $1 million per year. The idea behind this move was to put limits on managerial compensation. But, importantly, the law exempted incentive pay, such as stock options. This led corporate boards to make stock options an even larger component of executive compensation, enriching executives beyond their wildest dreams—a classic example of the law of unintended consequences.

Nevertheless, by the mid-1990s, the idea that corporations should concern themselves solely with making as much profit as possible was so much the conventional wisdom that Bill Clinton could say in a radio address, “The most fundamental responsibility for any business is to make a profit.” This view is shared by the public, according to surveys.

In the 2000s, however, some former supporters of the shareholder value movement began having second thoughts. Jack Welch, CEO of General Electric between 1981 and 2001, called it a dumb idea. As he told The Financial Times in 2009, “On the face of it, shareholder value is the dumbest idea in the world. Shareholder value is a result, not a strategy.… Your main constituencies are your employees, your customers and your products.”

By 2018, Larry Fink, CEO of BlackRock, the world’s largest investment fund, expressed concern that the profits-at-all-cost model of corporate enterprise was creating excessive social costs, particularly for the environment, that were unsustainable. He pledged to use the voting power of the trillions of dollars of shares he controlled to improve corporate social responsibility.

In August 2019, the Business Roundtable, an organization representing America’s largest corporations, issued a statement calling upon all businesses to take greater responsibility for ensuring that the interests of every stakeholder are addressed in corporate policy. The statement also said that shareholders aren’t only concerned with short-term profits but long-term profitability, and that an excessive focus on the former could damage the latter.

This view was echoed by the World Economic Forum in Davos, Switzerland. In a December 2019 statement, the Davos group announced, “A company is more than an economic unit generating wealth. It fulfills human and societal aspirations as part of the broader social system. Performance must be measured not only on the return to shareholders, but also on how it achieves its environmental, social and good governance objectives. Executive remuneration should reflect stakeholder responsibility.”

Ironically, the Stigler Center at the University of Chicago—Milton Friedman’s former academic home—is now leading efforts to change the focus of Friedman’s doctrine. Center economist Luigi Zingales points out that Friedman assumed a competitive market, something that does not exist in many industries these days. Therefore, competition policy, including aggressive antitrust enforcement, is a necessary complement to his doctrine. Additionally, Friedman was mainly concerned with governments mandating corporate social responsibility, but there is nothing wrong with shareholders demanding it themselves.

Democratic Senator Elizabeth Warren is pushing legislation to require that corporate governance includes the interests of the public and stakeholders, as well as shareholders, in business strategy and operations. To my knowledge, Joe Biden has said nothing on this subject, but it would behoove him to make it a major consideration in choosing his secretary of the Treasury. 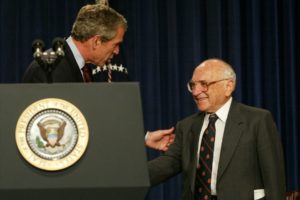