What Minimum-Wage Foes Got Wrong About Seattle
An initial study said the increase to $15 would cost workers jobs and hours. That didn’t happen.
Bloomberg, October 24, 2018

The dire warnings about minimum-wage increases keep proving to be wrong. So much so that in a new paper, the authors behind an earlier studypredicting a negative impact have all-but recanted their initial conclusions. However, the authors still seem perplexed about why they went awry in the first place.

Seattle, like some other thriving West Coast cities, a few years ago passed an ordinance raising the minimum wage to $15 an hour in a series of steps. The law was a partial response to rising income inequality and poverty in the city, which began its postcrisis economic boom well before the rest of the country.

The reaction was immediate, strident — and deeply wrong. The increase was an “economic death wish” that was going to tank the expansion and kill jobs, according to the sages at conservative think tanks. The warnings were as unambiguous as they were specific: expect restaurants to close in significant numbers and unemployment to rise, all because of this foolish attempt to raise living standards.

Those ideologically opposed to mandated minimum-wage increases freaked out when a Seattle pizza parlor closed. Meanwhile, they ignored data showing Seattle-area employment in the restaurant industry on the rise. The critics even blamed Seattle’s minimum wage law for unemployment in suburbs not covered by Seattle’s laws. Despite their dire forecasts, not only were new restaurants not closing, they were in fact opening; employment in food services and drinking establishments has soared, as the chart below shows: 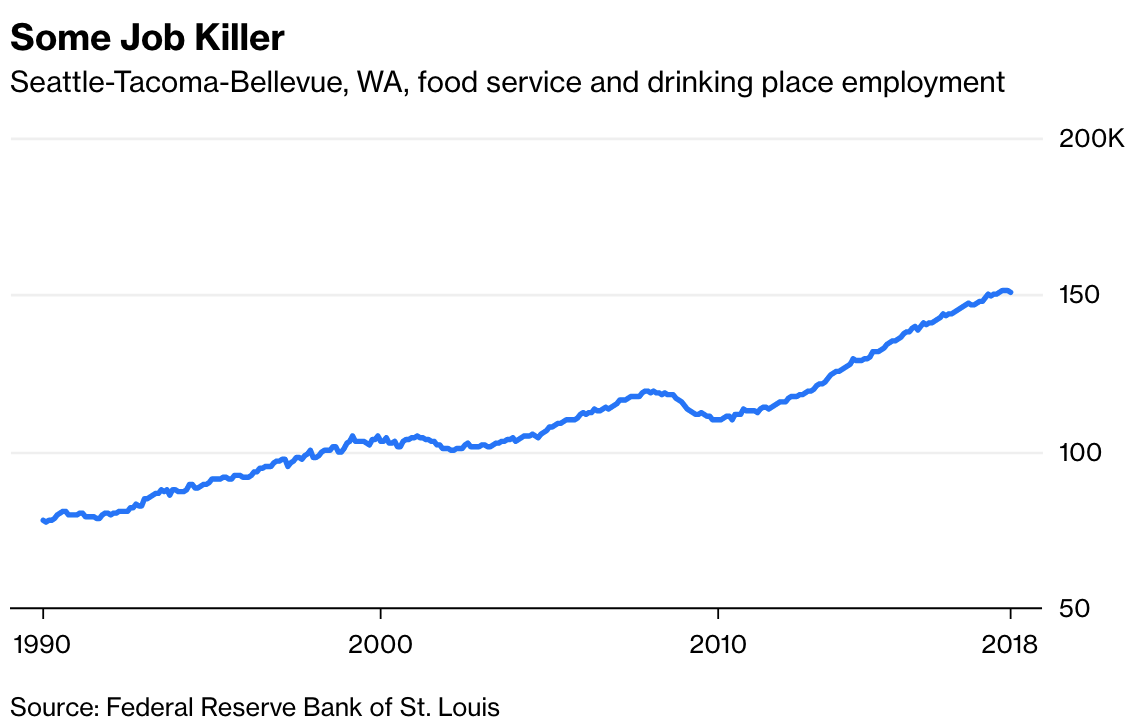 Alas, if only the critics has done their homework first, instead of using scare tactics.

Much of the hand-wringing was based upon a deeply flawed University of Washington study. As we noted in 2017, the study’s fatal flaw was that its analysis excluded large multistate businesses with more than one location. When thinking about the impact of raising minimum wages, one can’t simply omit most of the biggest minimum-wage employers in the region, such as McDonald’s and other fast-food chains, or Wal-Mart and other major retailers. These are the very employers that were the main target of the minimum-wage law; indeed, the law established an even higher minimum wage of $15.45 an hour for companies with 500 or more employees.

There were two other glaring defects in the first study that are worth mentioning. The first is that its findings contradicted the vast majority research on minimum wages. As was demonstrated back in 1994 by economists Alan Krueger and David Card, modest, gradual wage increases have not been shown to reduce employment or hours worked in any significant way. Ignoring that body of research without a very good reason made the initial University of Washington study questionable at best.

Second, there potentially is a problem with having a lead researcher — economist Jacob Vigdor, whose affiliations among others include the right-leaning Manhattan Institute — whose impartiality is open to question. I don’t wish to suggest people cannot have opinions, but researchers need to be open-minded. This especially true in fields like economics and public policy, where belief systems and political affiliations can have an outsized impact on objectivity.

Now of course, we should consider the argument that Seattle’s economic growth has been so strong that it overwhelms any negative effects from the higher minimum wage. No one should ignore that possibility and we will be among the first to acknowledge that this could be the case. We may never know for sure, because in economics you don’t get a chance to run control experiments; you only have the facts at hand.

But we can’t emphasize enough just how wrong many of the initial analyzes of the wage increase have been. Cognitive dissonance is a powerful force. If your ideology includes the belief that all government attempts at raising living standards are doomed, then of course you are going to be against mandated minimum wages. The problem occurs when these folks are confronted by facts that are at odds with their belief systems. The options are to either rethink your ideology or alternatively ignore the data. Most participants seem to have done the latter. Kudos to the University of Washington team for at least trying to incorporate the facts into their latest research.

I originally published this at Bloomberg, October 24, 2018. All of my Bloomberg columns can be found here and here.