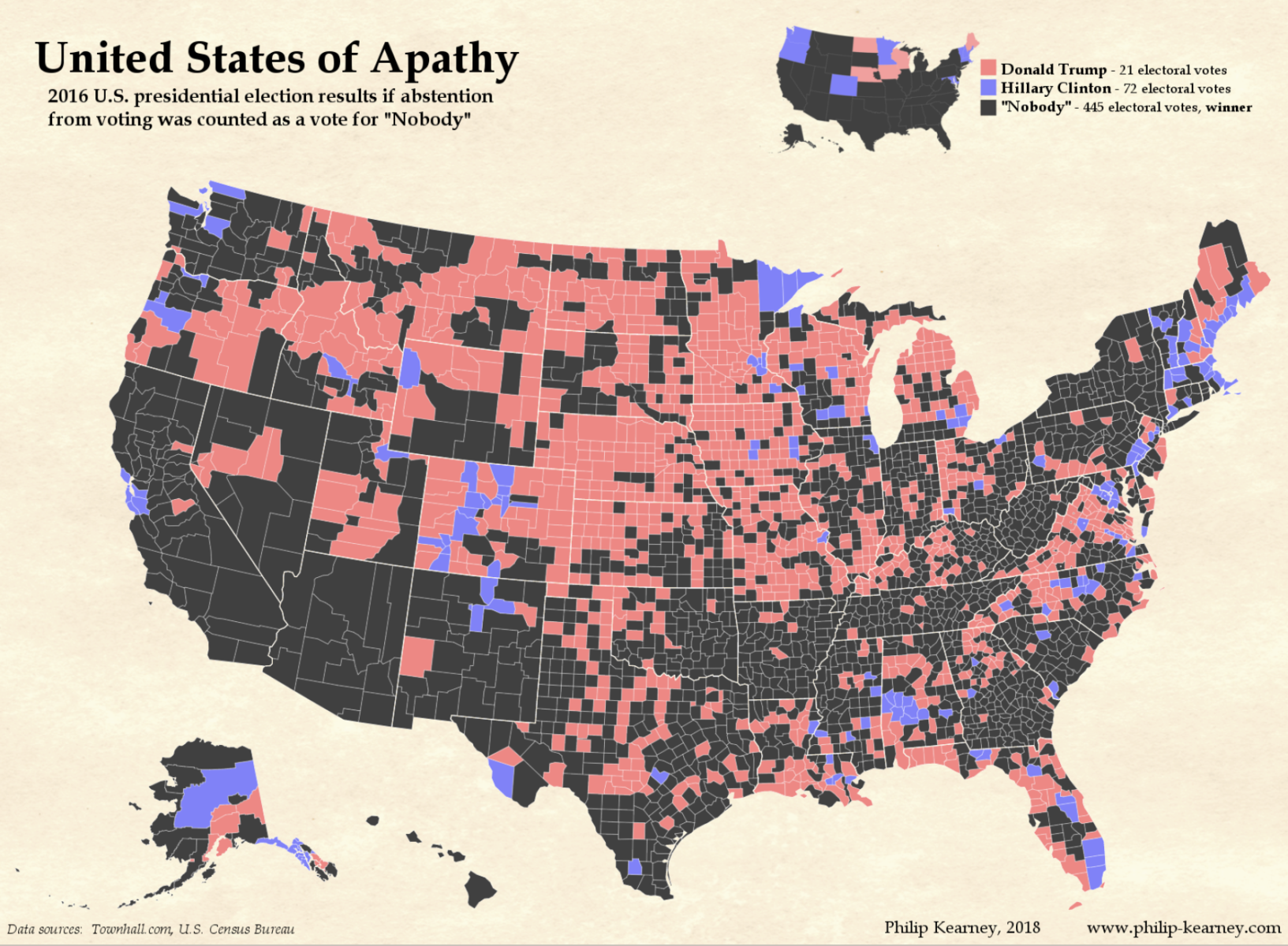 In the 2016 Presidential, Hillary Clinton came in second. POTUS fans should not laugh — Donald Trump came in third.

NONE OF THE ABOVE.

The chart nearby shows this on a county-by-county basis. Looking only at vote totals, the final percentages of votes are something like this:

Let’s do a brief thought experiment, to help conceptualize how so much national apathy, despite the actual stakes in 2020, impacts elections:

Imagine if we changed the default setting for all eligible voters to a presumption of a vote for NONE OF THE ABOVE. The only way to move your ballot away from that group was to cast it for any specific candidate. The only way a candidate could win is if they get a majority of all eligible voters. Election night, each county passes the winner’s name along to their state election board. The state then totals the county wins, and that’s how they decide their electoral college votes. Call this a “nudge” experiment to motivate citizens to vote.

If we look at the election on that basis, the electoral college would look very different:

It’s Nobody, by a landslide.

More eligible voters chose not to cast a ballot for either candidate, than any candidate, and si in our thought experiment we can declare Nobody the winner.

Consider the changes the politicos would undertake: Your opponent is no longer just that guy or gal from the other party, but everyone too lazy to get up off the couch. Suddenly, voter registration becomes very important. Voter suppression works against both your opponent AND you. Lots of unanticipated effects will come based on None of the Above as a candidate.

But those are not the rules in 2020. But the prevalence of None of the Above as the eligible voters’ first choice raises some fascinating strategic issues for 2020. The Presidential contest is very well likely to be determined by those citizens who did not vote.

Who will have more sway: The least enthusiastic group of voters (who tend to stay home?) or the most enthusiastic, who may be very excited about their candidate or even more enthused voting against the other candidate. It is an interesting question.

Stop complaining about the electoral college. To win the next election, you need to figure out how to motivate those who do not vote to cast a vote for your candidate. Conversely, if you can convince your opponents voters to not cast their ballots,* thats a potential rout to winning also.

* I mean legally, not via voter suppression. 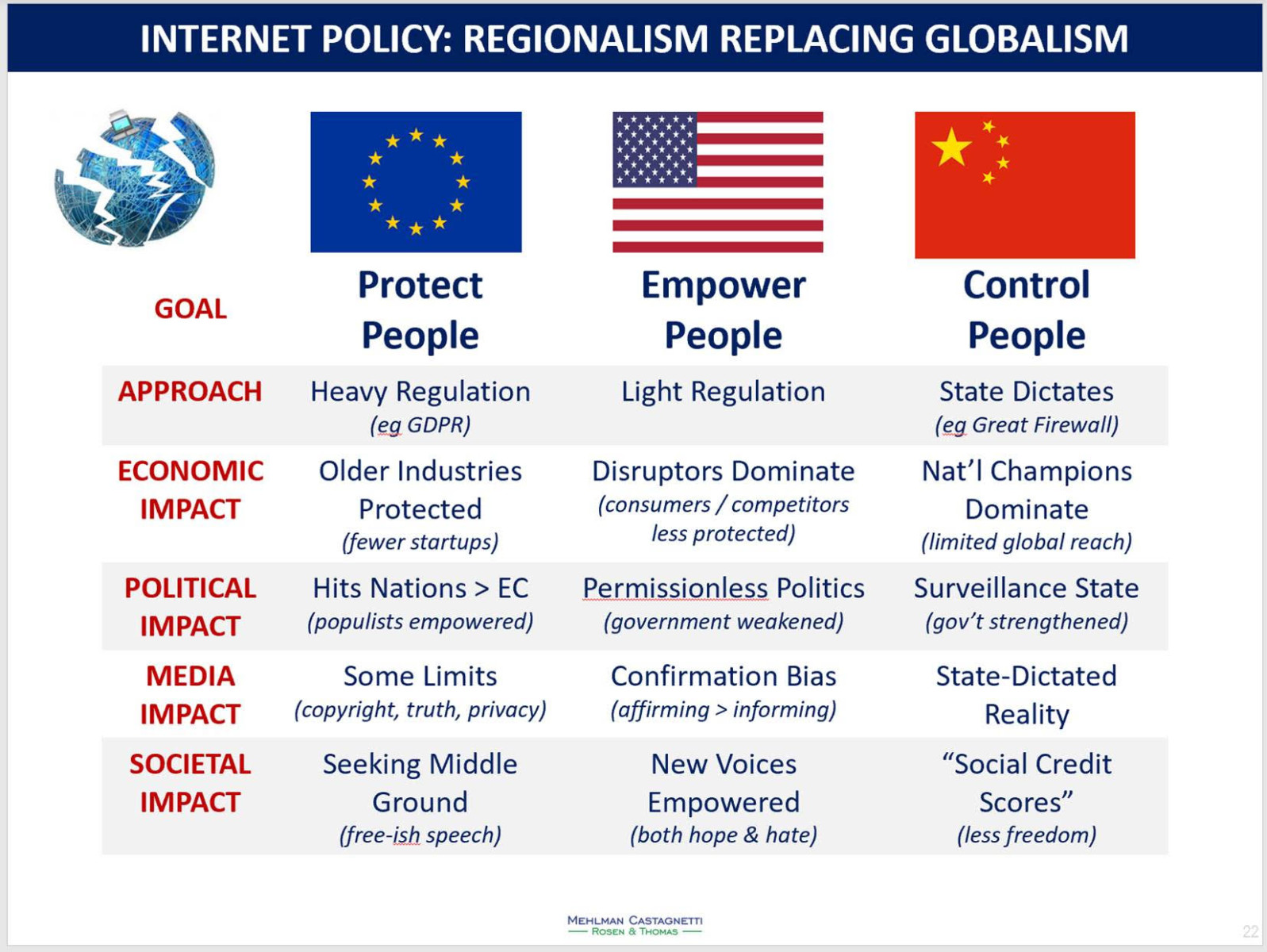 Source: Bruce Mehlman     The internet has been Balkanized. There is no longer one single web as originally imagined by Vint... 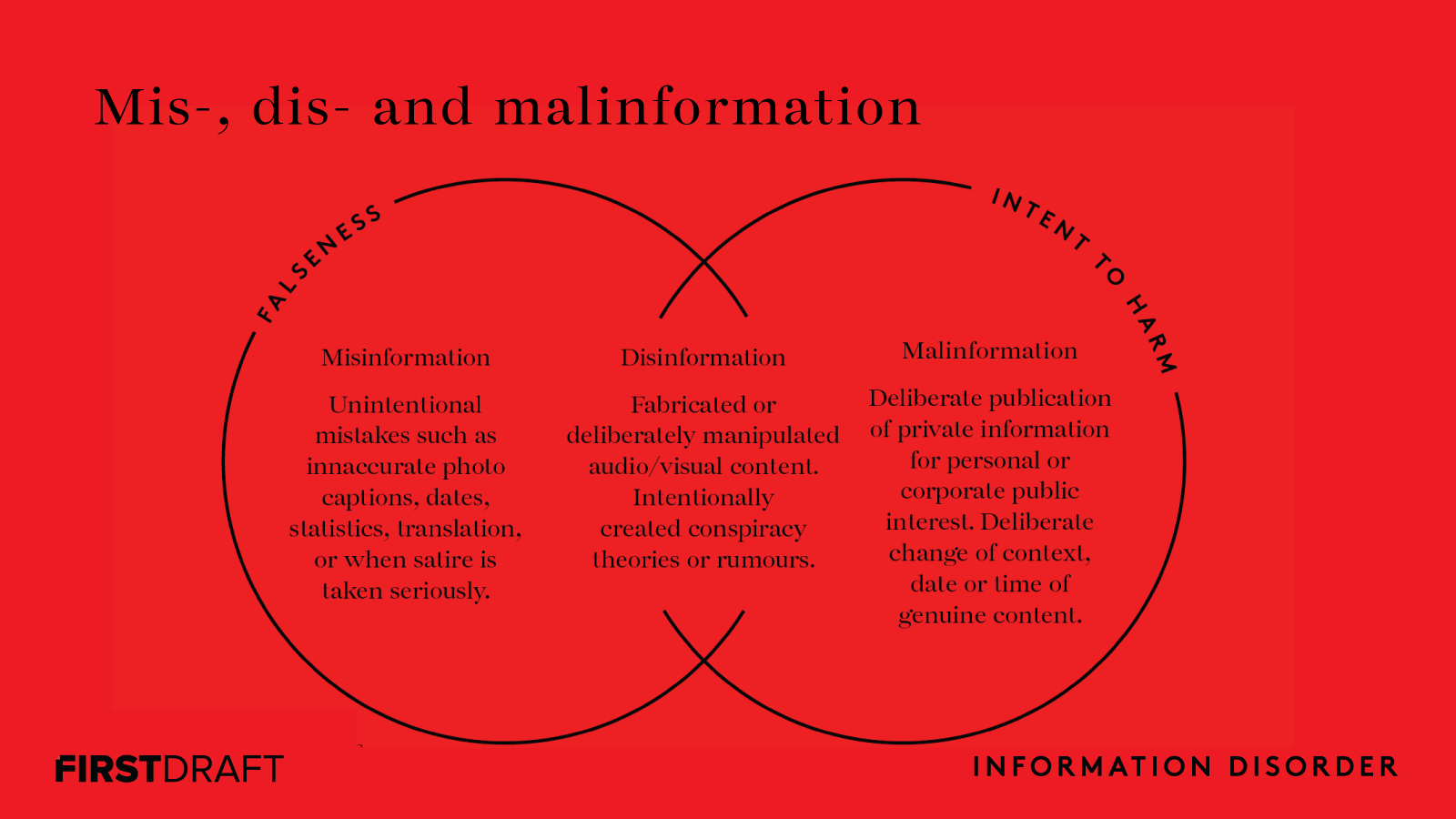 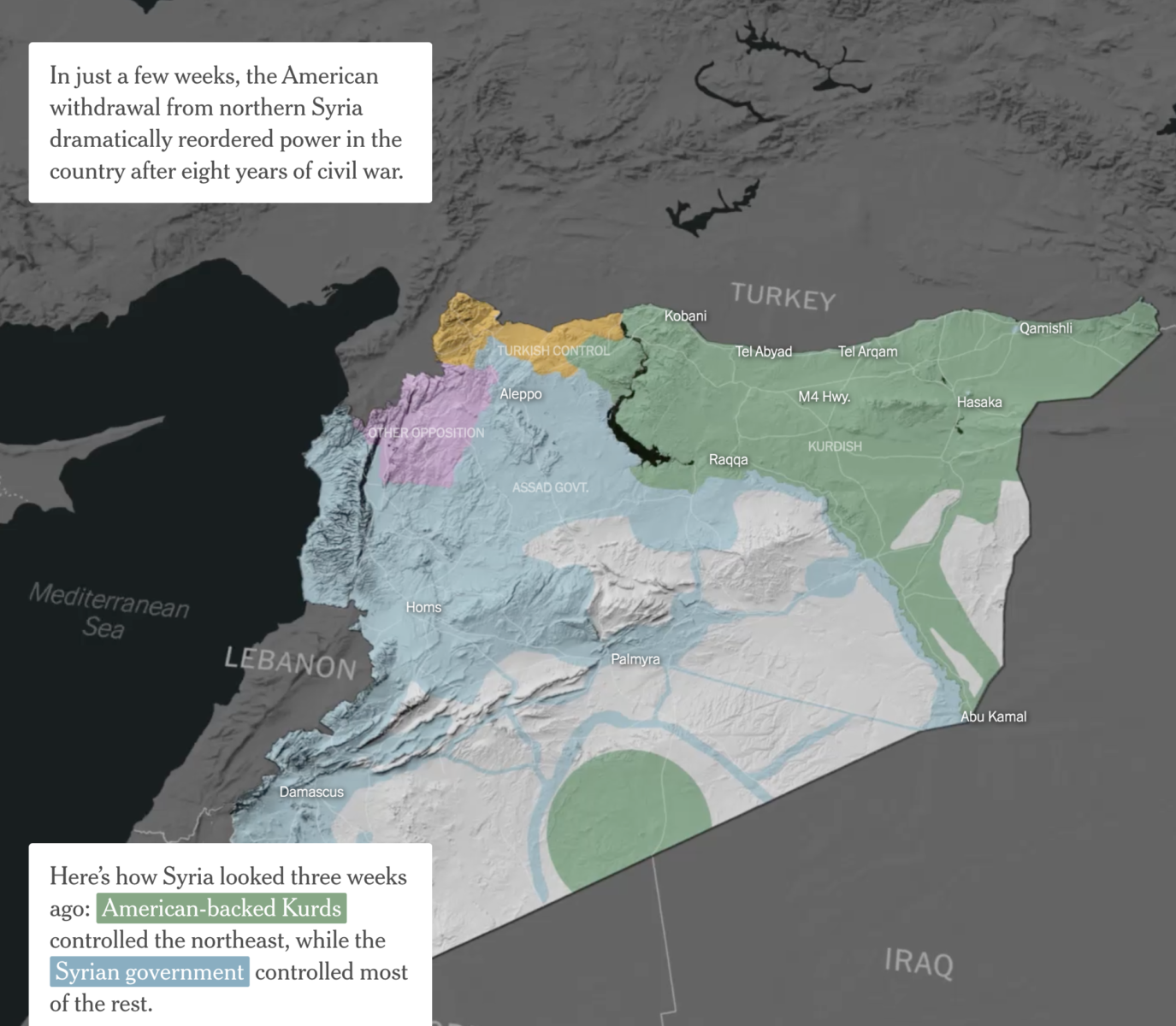 What kind of crazy, fucked-up world do we live in where Bernie Sanders has a heart attack and comes back stronger than ever? One in which...

They’re all on the same page: 1. The Bidens are guilty of something and it needs to be investigated. 2. Trump committed no crime....

How do you lose a Presidency? Very slowly, then all at once. This is not a new story. Trump has been flirting with disaster from before... 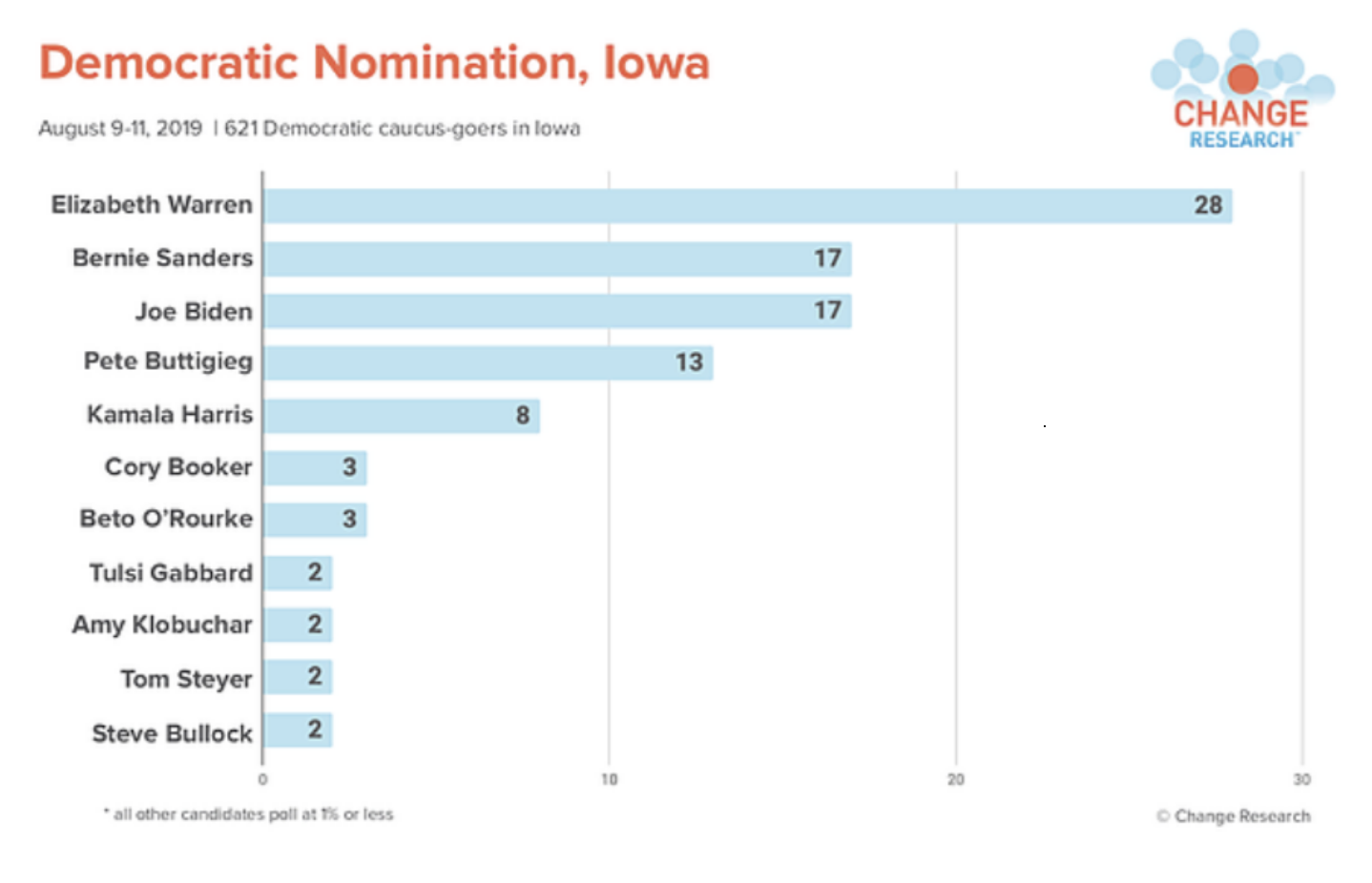