Almost three years ago, we got a chance to watch a real-time experiment of the impact higher minimum wages would have on job creation after some localities passed laws to raise pay floors. Although opponents immediately decried the increases as job killers and as proof that leftists are intent on destroying the economy, the wiser course was to wait and see what the data produced.

We now have a growing body of evidence that tips the scale in favor of the proponents, bolstered by several decades of research on the subject. At this point, the clear conclusion is that modest increases in minimum wages implemented slowly over time don’t destroy jobs or hurt growth.

The latest reminder comes in a new research paper by Doruk Cengiz, Arindrajit Dube, Attila Lindner and Ben Zipperer that looks at data during the period from 1979 to 2016 in 138 U.S. states and regions where minimum pay was increased. The conclusion is that low-wage workers had a pay gain of 7 percent after a minimum-wage law was enacted, but there was little or no change in employment.

This is another blow to those who carped and complained after cities such as Seattle,1  Los Angeles, San Francisco, Minneapolis and others adopted higher pay floors.

Specifically, the authors looked at jobs after the implementation of new wage laws, and at jobs paying less than the minimum wage that were replaced by jobs at or above the new pay floor. The researchers found that the overall number of low-wage jobs remained essentially unchanged during the five years after minimum-wage increases. This offers further support for the argument that increases don’t hurt the lower end of the employment market.

The modern history of the minimum-wage debate traces back to a seminal 1993 paper by economists Alan Krueger and David Card.2  Card, in an email, said that the latest research “results confirm the main findings from the stream of more credible studies that have been conducted for the past 25 years i.e., pretty large wage impacts but very small employment effects.” 3

If confirmed by other research, the study could build support for more regional or even a national increase in minimum wages. Legislation leading to higher pay – but without hurting employment — is a main focus of the labor movement. It has attracted interest and backing from many of the Democratic congressional freshmen. The national minimum wage now is $7.25 an hour and hasn’t been raised since 2009.

There are a two counterarguments to Cengiz et al.’s research that are worth considering: The first is that by only measuring low-wage jobs, and not total employment, the researchers missed a big chunk of minimum-wage effects. That may or may not be true; the challenge is showing a causal connection between minimum-wage laws and those working in higher-paying jobs being displaced. Explanations for this appear circumstantial or tenuous at best.

The second and more intriguing challenge is that the minimum wage has lagged so far behind productivity gains and inflation that pay increases — even substantial ones — have little or no effect on the supply-and-demand equilibrium. The chart below shows how wage gains have failed to keep up with productivity: 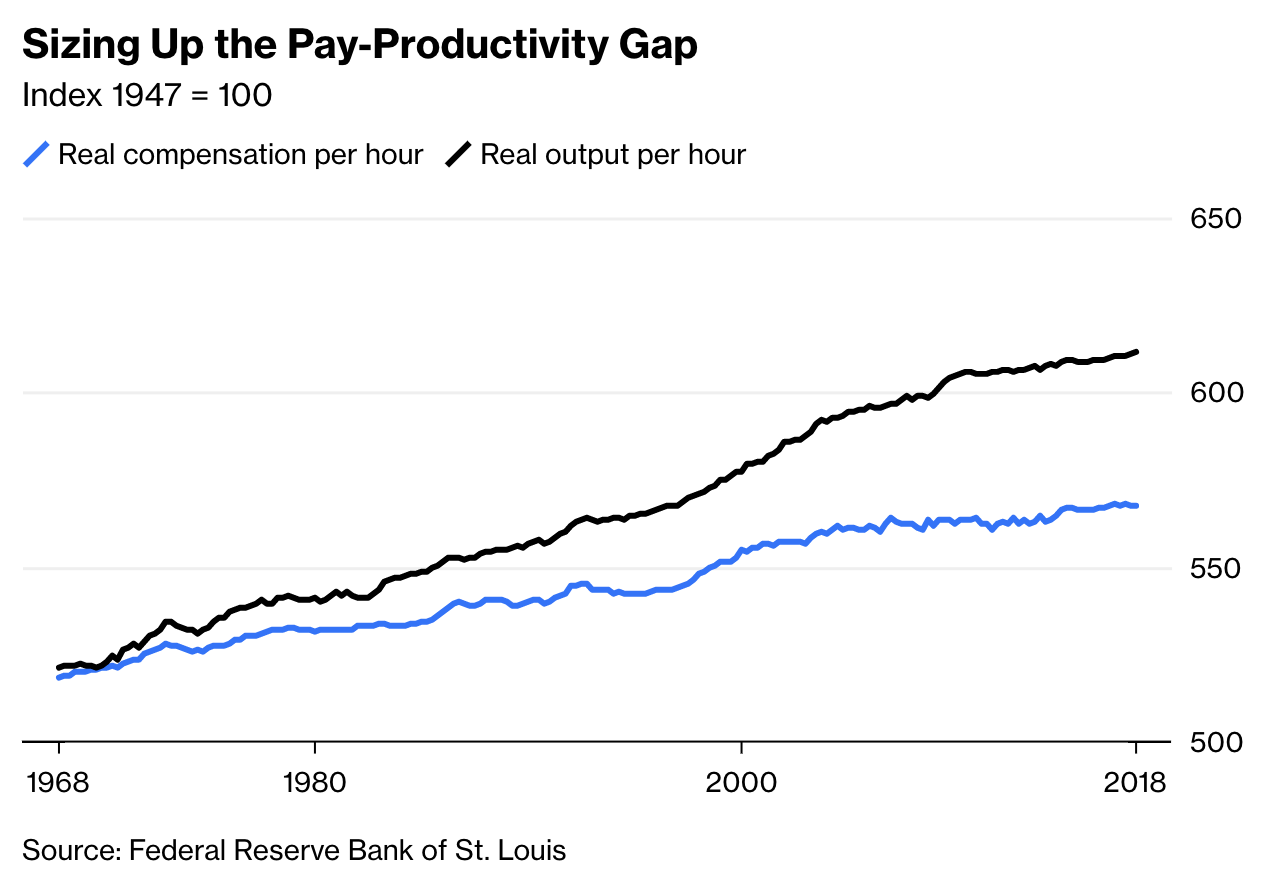 Let’s consider a simple argument, which is straight out of Econ 101: Raise the price of a good or service, in this case labor, and the market responds by consuming less of it, meaning employers cut hiring.4  However, if the lowest-paid workers’ salaries are so far behind the value of their work to employers, wages might rise fairly substantially before having an impact on the balance of labor supply and employer demand. In other words, even with an increase in the pay floor, workers don’t make up lost ground after minimum wages are raised.

At some point, of course, raising the minimum will reach an equilibrium and further increases could reduce the total job count. But at this point it’s possible that a national $15 minimum hourly wage could be adopted and there would be little or no negative impact on total employment.

Those who claim that minimum wages are job destroyers have been successful in thwarting an increase in the federal minimum wage for a decade. Yet, the accumulation of data and a shift in the nation’s political currents make it likely that an increase is becoming more acceptable. With the 2020 presidential election already heating up, demands for raising the minimum wage could very well become a defining issue.

1. Those against the minimum wage wildly overplayed their hand in Seattle. Before the law was passed, they claimed that the increase would destroy jobs; soon after, they declared vindication when a pizza parlor closed. Most of their claims have since proven to be either exaggerated or wrong.

2. “Minimum Wages and Employment: A Case Study of the Fast Food Industry in New Jersey and Pennsylvania,” by David Card, Alan B. Krueger, NBER Working Paper No. 4509,October 1993.

3. They also help to understand the apparently contrary findings in what’s known as the Meer-West study.

4. This assumes a certain price elasticity of demand, i.e., you can get away with buying less of something when its price rises.

~~~
I originally published this at Bloomberg, January 24, 2019. All of my Bloomberg columns can be found here and here.