Studying wealth and income inequality has long been the stomping grounds of economists with the time and willingness to dig into 19th-century tax ledgers, Gilded-Age stock ownership and pre-Great Depression bank holdings.

For the do-it-yourselfers the entire exercise just became a lot easier, with the release by the Federal Reserve of a vast run of information on U.S. wealth distribution. It has something for everyone, making it simple to cherry pick your favorite data point and support your philosophical views on just about anything — taxes, wealth and inequality

Why does this matter? At a time when inequality may be given more attention in the run-up to the 2020 election, it’s not hard to imagine how this raw material might be fashioned into campaign slogans. There’s plenty of fodder here for the likes of everyone from Representative Alexandria Ocasio-Cortez to Treasury Secretary Steve Mnuchin.

Let’s look at a few possibilities:

America is richer than ever: This is one for the incumbent to tout. Americans have never been wealthier: Household assets are at an all-time high, with a total value of $117.6 trillion. Total net worth (assets minus liabilities) is $102.5 trillion. Liabilities, primarily home mortgages ($9.7 trillion, or 70%) and consumer credit ($3.6 trillion, or 26%) make up most of the $15.1 trillion of total liabilities.

Relative to these assets, or to discretionary income, debt levels at present are very manageable. They are substantially lower than they were before the financial crisis — in fact, household debt-service and financial-obligation ratios are the lowest since this data series began 30-years ago. In other words, American households are both richer and carry lower debt burdens, lowering a huge source of both economic and psychological stress.

America is for the rich: An issue for the challengers. Yes, America is wealthier than ever, especially if you are in the top 10% of households. The Fed found that the top 1% of American households held wealth of $32.5 trillion. That works out to be an average household asset value of about $25 million each. The rest of the top 10% (90th to 99th wealth percentiles) held total wealth of $42.8 trillion. Add the top 1% to this group and we get a total of $75.3 trillion, with an average household wealth of $5.8 million. To be sure, this is an average and is skewed by the enormous wealth of those at the very top; the median, or midpoint, would be lower.

The next 40% (50th to 90th percentiles) has total assets of $35.3 trillion. The 63.8 million households in the top half of America have average household total wealth of $1.72 million apiece. Note this does not include liabilities such as mortgages, student loans, consumer credit, which offsets some of this.

Where things get interesting is when we look at the bottom 50% of households in America by wealth. They own total assets of $6.86 trillion. That reflects wealth (before liabilities) of a mere $107,523 per household.

The conclusion here is that the wealthy own most of the assets, while the less wealthy are stuck with most of the liabilities. Construct the cleverest campaign slogan out of this and you just might become the Democratic nominee for president. 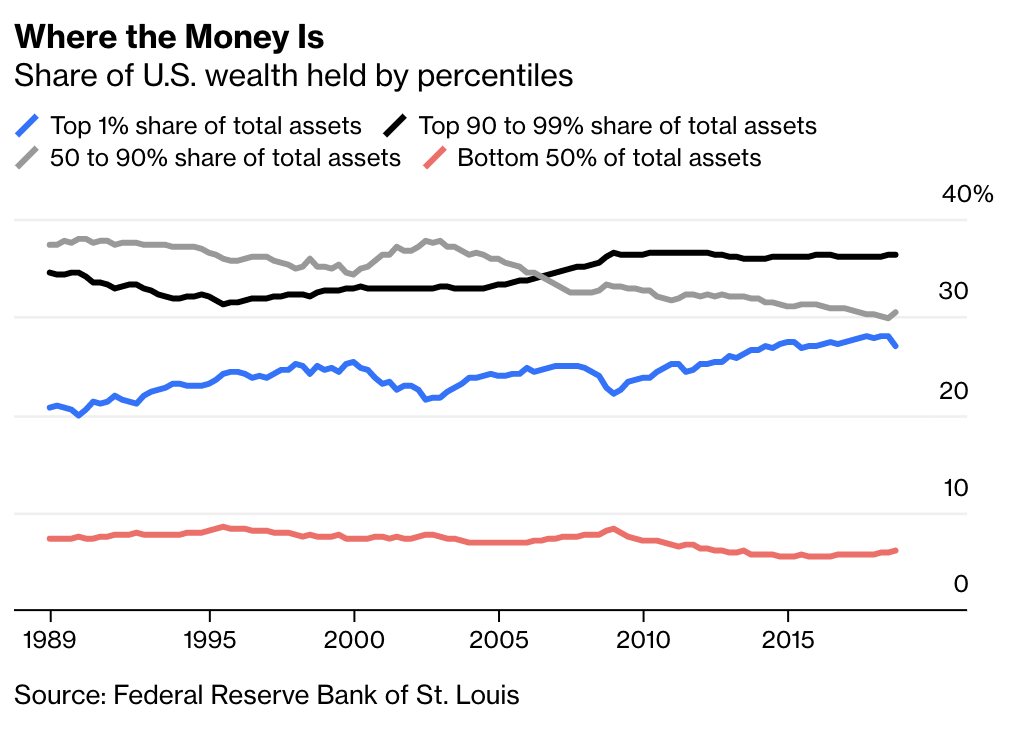 Supply-side economics doesn’t make everyone richer: There’s probably something for incumbents and challengers here, and it might also help settle a debate that has preoccupied economic wonks for years. We can now show data for the three decades following the adoption of Reaganomics, aka supply-side economics; that reducing the tax burden on the wealthy would lead to a burst of economic growth that would make everyone richer, and that wealth would trickle down from the top. The new data make it clear that the opposite has happened, and wealth inequality and income inequality have each increased.

This data helps us see that supply-side economics was always about shifting wealth from the low and middle ends of the wealth distribution toward the top. In other words, much of our wealth inequality is by design, the result of public policies. Whether this was done out of good faith or bad is up to you to decide.

The conclusion of all this giant data dump: We shouldn’t be surprised if economic inequality plays an ever-more prominent role than it has in past presidential election cycles. We all owe a small debt of gratitude to the researchers are the Fed who pulled this data together and made it just a little easier to understand the full extent of the vast disparities in wealth and income in modern America.

I originally published this at Bloomberg, July 16, 2019. All of my Bloomberg columns can be found here and here.