The U.S. Labor Market Isn’t all That Healthy
Underemployment is a problem that isn’t measured well by the official data.
Bloomberg, July 1, 2019

By most measures, the U.S. is at or very close to full employment. The unemployment rate today is 3.6%, the lowest since 1969.

And yet, there is a sense that something is amiss.

Consider the following data points. In a typical full employment economy, this is what you would expect to see:

In many case, these measures are not where you might expect them to be in the 10th year of what is now the longest economic expansion in postwar history. This isn’t to suggest that these are portents of a tired economy beginning to run out of fuel, but rather, indicators of something more insidious — larger, structural failures within the U.S. economy.

Don’t be too quick to dismiss this as the result of the unholy trinity of labor woes: globalization, automation and decline of labor unions. These are well-known factors that have been keeping real wages in check for three decades.

Nor should we just blame the Great Recession and financial crisis for this state of affairs. We know that this is not the usual economic cycle, and that recoveries from financial crises take longer. No, something more fundamental seems to be in flux.

Yet there might be a much simpler explanation: The U.S. is nowhere near full employment.

There is a host of other data points that point to the underlying malaise of the labor market. Although not all of these are strictly economic measures, they include:

— Long-term unemployment remains elevated;
— A lot of people working part-time want full-time work;
— Disability filings have increased dramatically;
— The number of people marginally attached to the labor force is high;
— Major increase in rates of depression and social withdrawal;
— Rising suicides;
— Increase in early retirements;
— Americans are angrier than they were a generation ago.

One labor economist who has studied this closely is Dartmouth professor David Blanchflower. The former member of the Bank of England’s Monetary Policy Committee is the author of a new book, “Not Working: Where Have All the Good Jobs Gone?“

I spoke last month with Blanchflower about his work for a Masters in Business podcast. His conclusion is the U.S. economy is nowhere near full employment. According to him, unemployment can fall by a third from its present levels, closer to 2.5 percent, before we reach full employment. It is an outlier position, but one he backs up with a wealth of data.

In his telling, the underemployed today include those who might be working fewer hours than they would like. Then there are those with multiple part-time jobs and working as many as 80 hours a week, but because they are not with a single employer, they receive no retirement plan or health-care benefits. The gig economy was supposed to create lots of well-paying, independent jobs; these Uber expectations have been dashed by the reality of long hours, mediocre pay and no benefits.

The shift to lower wage jobs for entire groups of workers is similarly problematic. Working full time while earning much less than in the past has profound ramifications. Entire industries have been disrupted, and often employees find taking a new job in a different sectors leads to near-entry-level pay — equivalent to a 30, 40, even 50% salary cut. These folks may be working full time but they clearly are underemployed relative to their experience, skills and past work. This is not captured in economic data.

Blanchflower explains how underemployment manifests itself in a variety of data points outside traditional economic measures. He notes that the plight of the underemployed is contributing to widespread despair, a worsening drug epidemic, and increased suicide rates. These were memorably highlighted in the research of Nobel winning economist Angus Deaton and his wife, Anne Case, who documented the rise of “death of despair” among working class whites. Blanchflower even ties the phenomenon of underemployment to the rise of far-right populism, both in the U.S. and Europe.

Blanchflower also studies happiness and points out that being poor in America often leads to stress, insecurity and hopelessness. In “Unhappiness and Pain in Modern America,” he and his co-author, Andrew J. Oswald of the University of Warwick, probe the disquieting idea that not only are Americans in greater pain than citizens of other countries, but that self-reported levels of happiness are falling.

The U.S. will hold a presidential election in 2020. We should be hearing a lot more about underemployment and its harmful consequences in the coming campaign. If we don’t, that points to something even more problematic about the state of America.

I originally published this at Bloomberg, July 1, 2019. All of my Bloomberg columns can be found here and here. 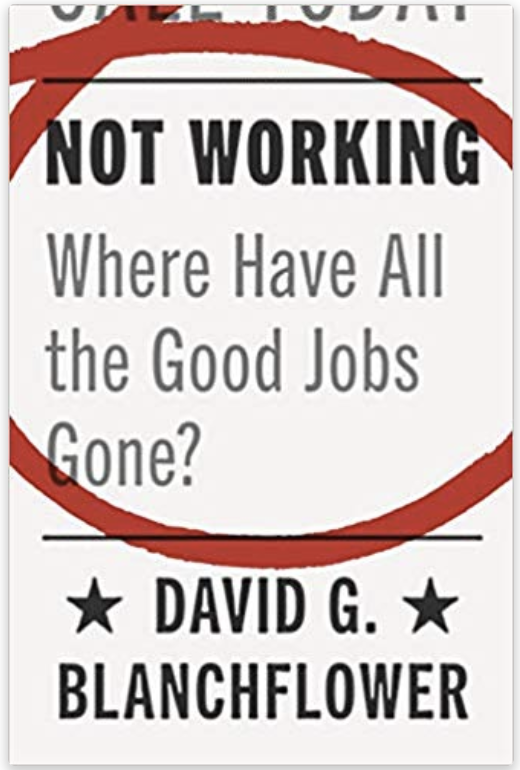