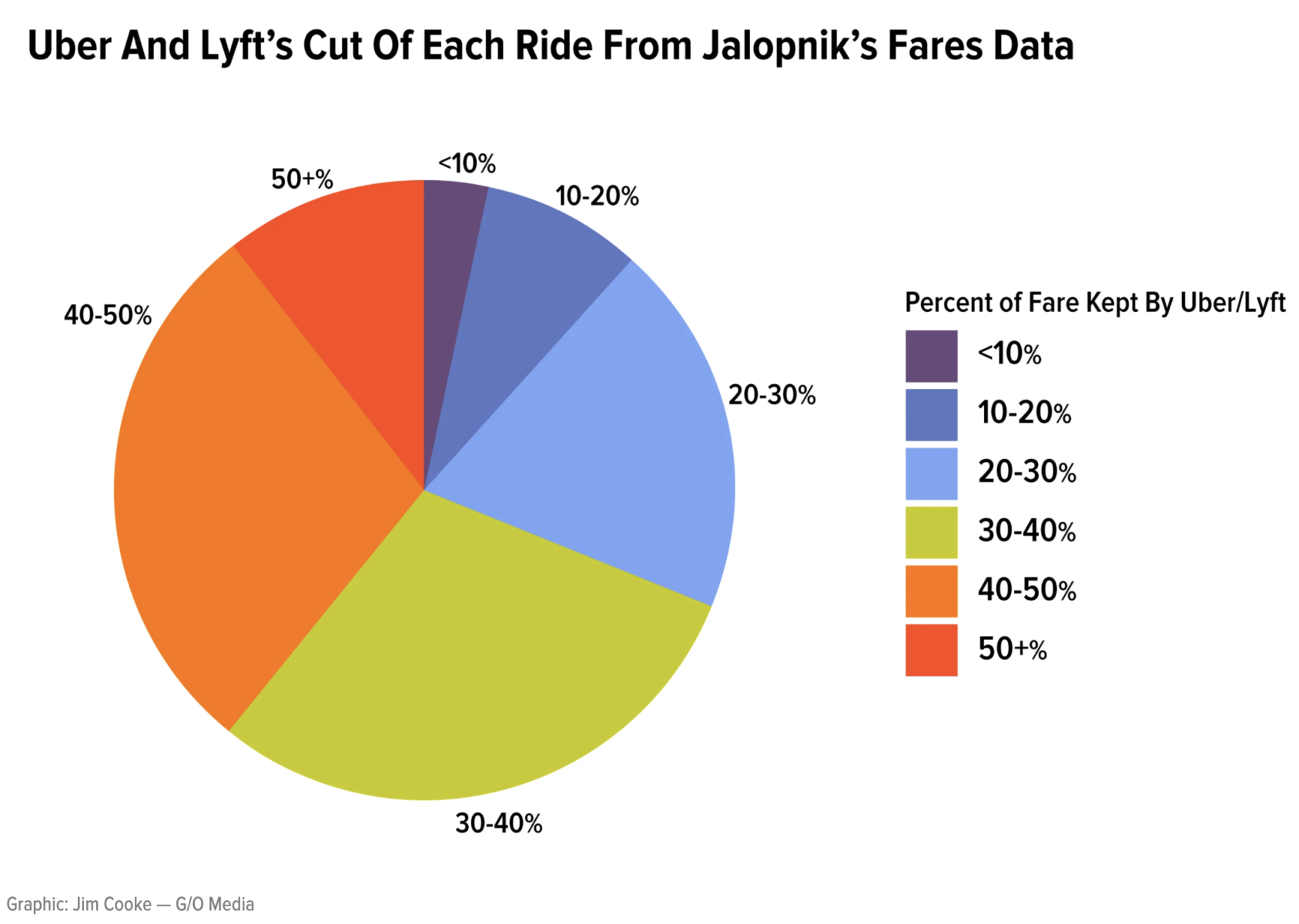 From this morning’s reads, comes this astonishing Jalopnik investigation into how the fares are split between the ride-hailing companies and drivers:

“Jalopnik asked drivers to send us fare receipts showing a breakdown of how much the rider paid for the trip, how much of that fare Uber or Lyft kept, and what the driver earned. In total, we received 14,756 fares…

Of all the fares Jalopnik examined, Uber kept 35 percent of the revenue, while Lyft kept 38 percent. These numbers are roughly in line with a previous study by Lawrence Mishel at the Economic Policy Institute which concluded Uber’s take rate to be roughly one-third, or 33 percent.

Of the drivers who emailed us breakdowns for all of their fares in a given time period—ranging from a few months to more than a year—Uber kept, on average, 29.6 percent. Lyft pocketed 34.5 percent. Those take rates are 10.6 percent and 8.5 percent higher than Uber and Lyft’s publicly reported figures, respectively.”

The full piece is quite revealing, and needs to be read in its entirety. The craziest part: The companies still lose money on most of their trips. Uber lost $5.2 billion dollars last year; Lyft lost $875 million, but only because they are smaller and did less rides.

Losing a little bit on each trip but making it up in volume is not an especially good business model.

My takeaway: both of these companies are unsustainable at the current pricing structure. I don’t know if self-driving cars is a solution — the owners of those vehicles still have to be paid. Regardless, prices are going to eventually have to go up — way up — in order for Uber and Lyft to run at a breakeven, let alone profitably.

Perhaps the future of these ride hailing apps look less like yellow cab services of cheap(ish) transport for everyone, and more like black radio cars, which are quasi-luxury, expense-account transport for society’s top 10%.

For now, their losses, and the driver’s shortfalls, are app users’ gains. Enjoy it while it lasts, cause it ain’t gonna last forever.

I may have to create a new category: “Start Ups Behaving Badly.”

WeWorks IPO By the Numbers