I am doing some research this week on endowments and how they invest. Like so much else in finance, once you go down the rabbit hole, you discover all manner of unusual data points.

Here is how everyone tends to think about the biggest endowments:

Note however that this list got assembled on a per school basis (US News, Forbes, Chronicle of Higher Ed, etc)  college. If we were to do this on a “Endowment per student” basis, the list also changes: Princeton jumps to #1, Harvard falls to #5, etc.

That Endowment edges out Harvard with about $40.1 billion dollars. The University of Texas has about $26.54 billion, while Texas A&M has $13.53 billion. UTIMCO, manages those plus the “operating fund” as well as other Texas endowments, runs a total of (checks notes) $47.74 billion dollars.

How did U of T endowment get to be so large? In a word, Oil.

The Texas endowment dates back to 1876, when the state made a  land grant of more than 1 million acres in West Texas to support the development of the UT and Texas A&M University systems. The giant reserves discovered in West Texas now throw off about a billion dollars a year, all of which is managed by UTIMCO. The system distributes about a billion per year to the 14 Universities in the system.

But the bottom line is this: UTIMCO manages more dollars than the Harvard Management Company, where they can be heard chanting “We’re #2.” 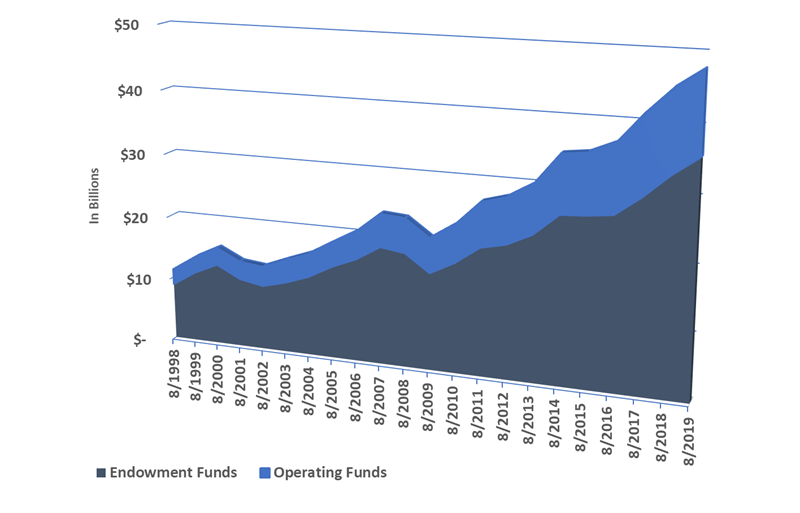