I want to avoid the usual “false equivalencies” and “both sides do it” approach, and ask a simple question: When people lie about economic data, why are they so much more often than not on the Right (or Far Right) side of the political spectrum?

I am going to try to address some remarkable claims being made by the those on the right about a number of economic and markets issues. As you work your way through these, ask yourself why it is necessary for some people to make shit up instead of sticking with the facts. If the facts support your position, why not deal with them straight up?

The Wall St. Journal editorial page seems to have problems with basic math.

In their July 30th editorial – The 99% Get a Bigger Raise – the Journal wrote:

Unless you go to the actual numbers. Here’s the data (with the relevant cells shaded):

I questioned the Journal about this discrepancy because it seemed to be a correctable mistake.

Nope. In response to my inquiry, I was told that this was, in fact, a “rounding difference.”

A “rounding difference” is a few pennies here or there — not $63.4 billion, and certainly not 73 percent more than the actual number. That this takes place in a paper that quotes stock, bonds, and commodity prices to the second decimal place now rounds to the nearest $150 billion. If the Journal’s editorial page is this disreputable with numbers, how can investors trust the rest of the paper?

2. Employee Compensation has “grown” by 42 percent.

CLAIM: The Wall St. Journal editorial claims “[Employee] compensation increased 42% more during the first two years of the Trump Presidency than in 2015 and 2016. This refutes the claim by liberals that the economy has merely continued on the same trajectory since 2017 as it was before.”

TRUTH: This claim is absurd, and whomever wrote it should be embarrassed. This used to be beneath the Journal. As I already knew, and BEA confirmed, “looking at a pure nominal dollar percent change does omit the growth in the labor force, as well as inflation, and those certainly could be very important considerations.” Idiotic, plain and simple.

To look at just one aspect – labor force growth – let’s see how compensation and jobs track each other:

Wow. Look at that. It’s almost like more people working means more compensation gets paid. If the Journal wanted to be an honest broker of information, they could have used Nonfarm Business Real Compensation per Hour, but they’re not, so they didn’t.

It wasn’t until the third paragraph of this WaPo op-Ed by Andy Puzder that I started to notice something was wrong with the math. Puzder, the former CEO of CKE Restaurants, had been under consideration for Secretary of Labor.

Let’s have a look at what Puzder wrote (my three areas of concern italicized):

The Bureau of Economic Analysis on July 30 published its annual revisions to personal income data. Following meager growth in employee compensation of 2.7 percent in 2016 and 2.9 percent in 2015, the revisions show significant increases of 4.5 percent in 2017 and 5 percent in 2018. To put those numbers in context, in President Trump’s first two years, employee compensation increased by $672 billion more than it did during President Barack Obama’s last two, for a whopping 42 percent improvement. In June, wages and salaries grew at an annual rate of 5.4 percent, with inflation at 1.4 percent, well below the Federal Reserve’s 2 percent target.

[NOTE: Compensation of Employees is Line 2 of Table 2.1 – Personal Income and Its Disposition]

Herewith my concerns, explained further below:

1. 2.9 percent YOY growth in employee comp for 2015 is flat-out wrong (and thereby dilutes most of his argument)
2. I cannot reconcile his claim of $672 billion “growth” (of employee comp) in Trump’s first two years over Obama’s last two AND, IMPORTANTLY
3. It’s moot because the number of employees over which that comp grew was hardly a constant. It grew by some 5 million over 2017 & 2018, AND THEREFORE
4. The notion of a “whopping 42 percent” gain is equally absurd as, again, the gains were spread over a workforce that grew by some 5 million
5. Extrapolating an annual growth rate for compensation – a volatile metric – off one month’s print is both inappropriate and misleading.

Here’s the BEA table from which Puzder presumably drew his numbers. Beneath Line 2 is my work.

Where Puzder’s math falls apart on the year-over-year number for 2015 which was, in reality, 4.9 percent and not the 2.9 percent he reports. In other words, 2016 was an outlier more than anything else, and the narrative beyond that is essentially a nonstarter. We know we hit a soft patch around that time frame, so this is nothing new. But let’s march on.

Finally, I’ll say that extrapolating one month’s wage/salary data (“In June, wages and salaries grew at an annual rate of 5.4 percent”) is absurd and should not be taken seriously when dealing with a noisy data set.

Three delightful BEA employees I spoke to were as bewildered as I was, so I guess I was in good company.

For the record, I never did get to the fourth paragraph or beyond, so you’re on your own. Forewarned is forearmed.

I did extract a correction from the WaPo, though it did not go far enough.

4. The repeated claims that Trump has unleashed a jobs market like none we’ve ever seen before. 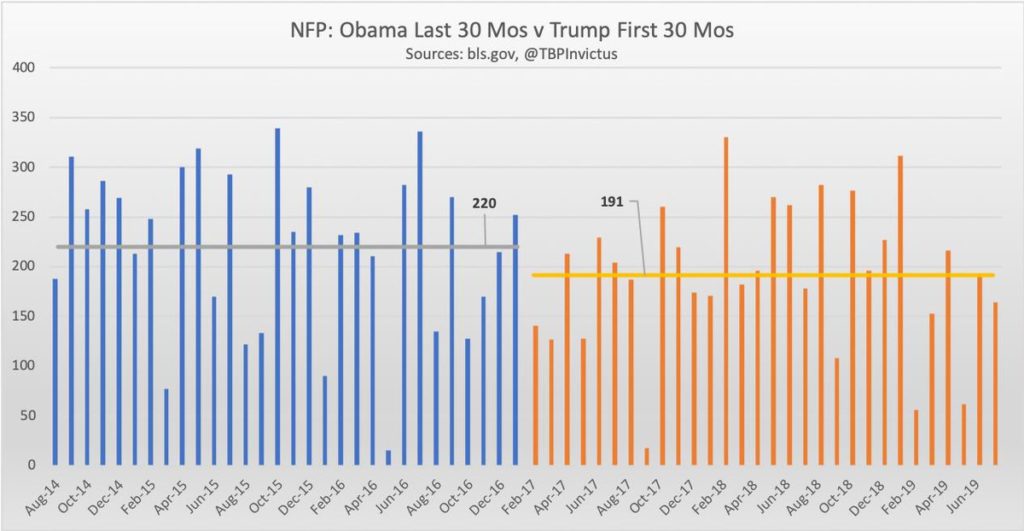 Here is an Apples to Apples comparison of Job growth of Obama vs Trump: 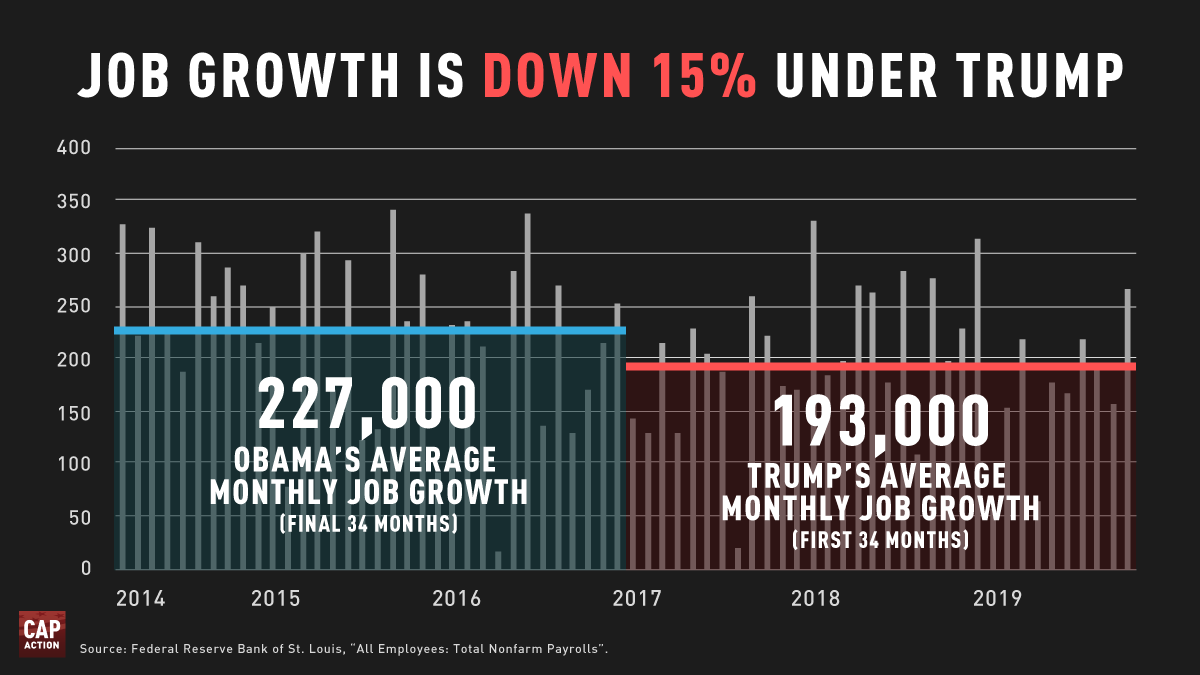 Now, if you go from the election — that great November 8th day — if you go from November 9th to present, you’re talking about almost a 60 percent increase in the stock market.

6. Steve Hilton (whoever he is).  Mr. Hilton took great liberties with several sets of numbers. Let’s have a look and we’ll break it down.

He piled on with the 42 percent canard, debunked above. 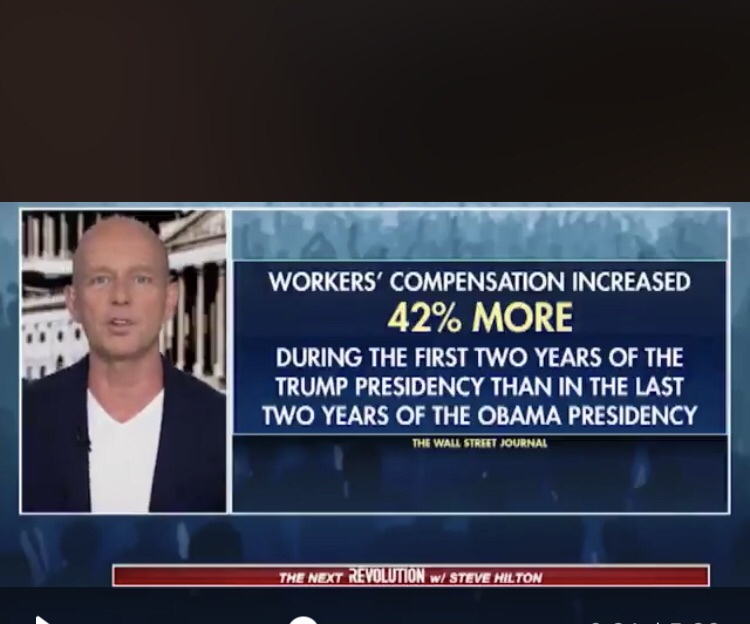 Here’s an absolute classic: Trump’s policies are so pro-worker that – get this – workers’ earnings are up in Trump’s first two years ONE TRILLION DOLLARS versus a gain in Corporate Profits of only $220 billion. What more proof do you need of Trump’s genius? 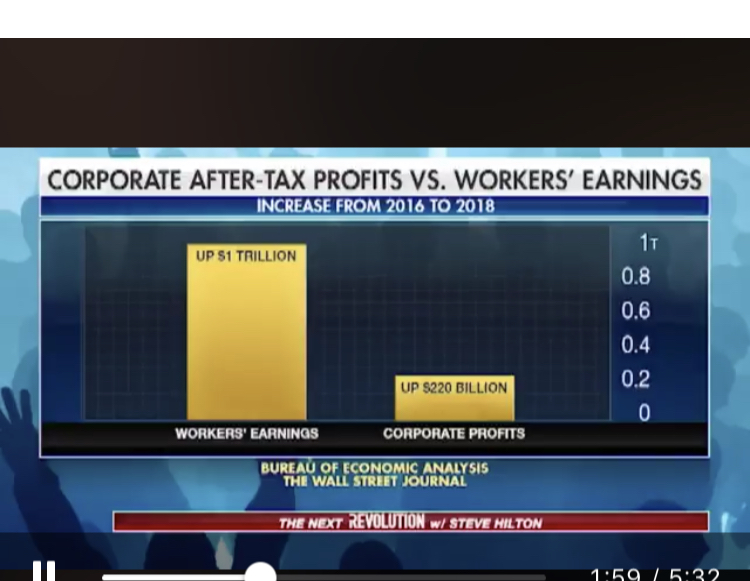 TRUTH: The ratio of compensation to corporate profits is always some 5 or 6:1, so this is of absolutely no use or value. To put it in a picture, here is the comparison Hilton made. It’s like saying that Whole Foods has a higher payroll than your local bodega and expecting to be taken seriously. 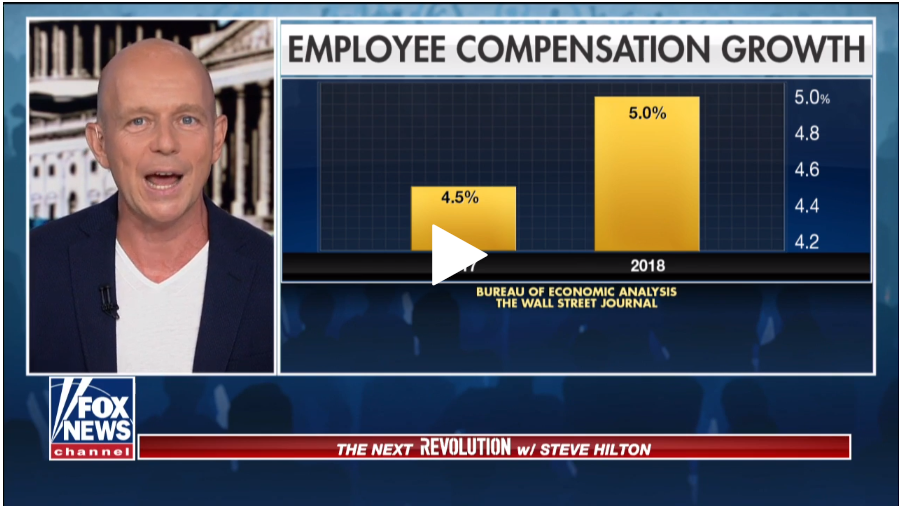 TRUTH: While 2016 was an outlier with respect to employee comp, the last two years are nothing more than part of an ongoing trend:

And, last but not least, Mr. Hilton wants us to believe that it’s Trump’s policies that are creating a virtual windfall for lower wage workers: 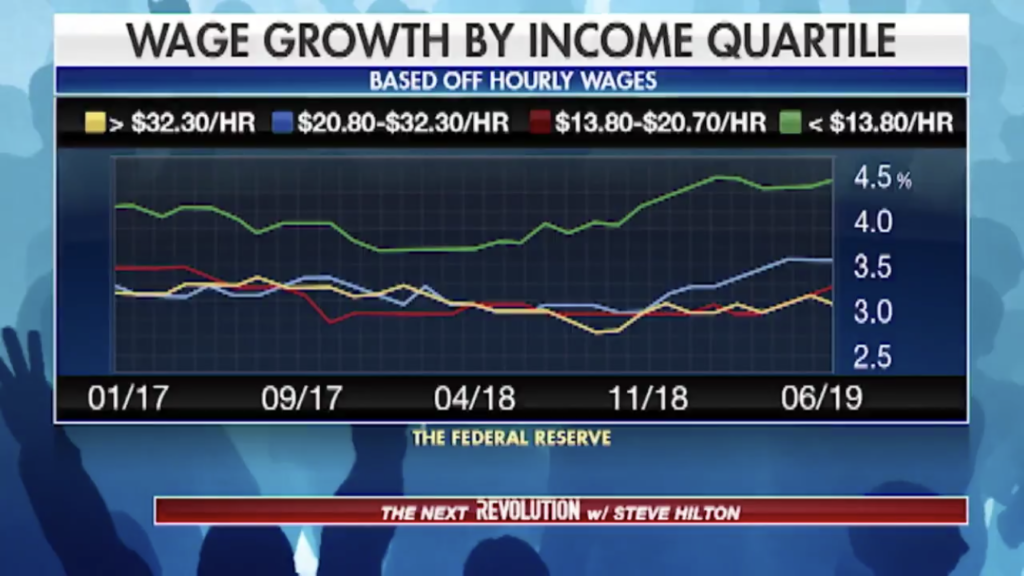 TRUTH: Took a while to figure this one out because the data are not from the Federal Reserve, but from the Atlanta Fed’s Wage Tracker. Though I’m sure Steve doesn’t know the difference. Anyway, the trend he cites began long before Trump took office. Below is a more honest look: 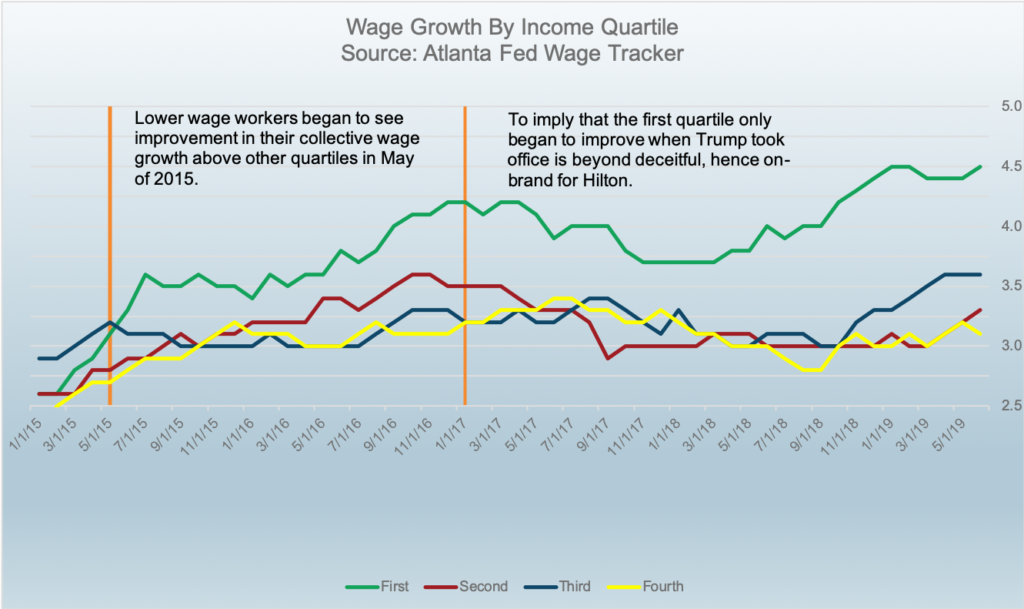 I had actually never heard of Steve Hilton before finding him some days ago, and he’s already one of the top few disreputable people I’ve found on the interwebs and/or television. And that’s saying something.

Whew. This is tiring.

The bottom line remains: If you have to lie to “prove” a point, if your argument requires fabricate numbers, then perhaps you don’t have as great a position as you might believe…