The 10 Most Useless Phrases in Financial Markets
Catchy slogans are not only no substitute for critical analysis, they are often wrong.
Bloomberg, September 23, 2020

What are the most useless phrases in finance.

Risk On / Risk Off
Don’t Get Complacent
Profit Taking
110%

What are some of yours?

It has been more than a year since we last visited the question of annoying financial clichés. I recently asked the Twitterati their least favorite finance phrases, and I was shocked at the overwhelming response. Why does this matter? Useless finance phrases have a pernicious effect on our psyche, leading us to blindly accept ideas that should instead receive critical analysis. It’s not just that catchy phrases are no substitute for actual thinking, they are often wrong.

Once again, let’s consider a new batch of the most meaningless phrases in finance:

1. “Don’t Get Complacent.” What, exactly, should an investor do with this bit of advice? How does a lack of complacency manifest itself in an investment portfolio? Should the recipients of this advice liquidate some or all of their holdings? Or should they merely be on the lookout for some heretofore unknown risk – as they always should?

“Don’t have a smug or uncritical satisfaction with oneself or one’s achievements” makes for a nice sentiment in a high school valedictorian speech or a college paper on Epicurean philosophy, but it is not what street types describe as “actionable advice.”

As someone who is in the advice business, I like to offer specific and identifiable actions, as in “buy this and sell that.” To be fair, something like “Hey, you have had a great run during this rally. Be careful about getting overconfident” is not the worst advice one could get – it’s just squishy and hard to express in a trade.

2. “Profit Taking.” This phrase tends to appear anytime there’s been a run up in asset prices, followed by reversal. It is never a simple consolidation or just a break from a relentless buying spree. Instead, the claim is that buyers at lower prices are now sellers at higher prices, booking a profit. This is always proffered without evidence or explanation.

Ironically, the correction in the stock market that began toward the end of the summer – about an 11% pullback in the Nasdaq 100 Index following a 77% gain from the lows less than 6 months earlier – was very likely actual profit taking as a driver of the selling.1 And yet, the one time the phrase could have been used accurately, no one seemed to bother with it.

Look at the Nasdaq Level II quote for any stock. The bid/ask spread is there, but so too are all of the various bids below and asks above the current market price, along with the number of shares at each price level. Prices move higher or lower when there are more willing buyers or willing sellers at any given level.2

Hence, the phrase “more buyers than sellers” only makes sense when referring to specific price levels, and not the actual 1-to-1 ratio of a buyer for every seller.

4. “The stock market hates uncertainty.” This could be the 2020 phrase of the year. It is not merely wrong, it reflects a fundamental misunderstanding of what drives markets. Buyers and sellers operate probabilistically, without certainty. If there was any certainty, who would ever take the opposite side of your trade?

Note that uncertainty isn’t the same as risk. As discussed previously, when the range of outcomes is understood, you don’t have uncertainty; you merely have an unknown future outcome.

The rare times when there is “certainty” are few and far between. A good example is late 1999, when everyone was sure markets had no limits, and again in March 2009, when everyone believed markets were going to keep crashing. It seems whenever there is certainty, the herd is wrong.

5. “The easy money has been made.” This phrase is only made in hindsight. What this bias translates as is “Darn, I missed an opportunity for a money-making trade, if only I knew then what I know now.” It never is easy.

6. “Earnings missed estimates.” This phrase is backwards. When an analyst creates an estimate as to a company’s next quarterly profit, he or she is making an educated guess as to that future data. A compilation of the analyst community’s various guesses together is a consensus estimate.

7. “Cash on the sidelines.” Every trade swaps cash for stock between both sides of the trade. T+1 (or T+3) settlement dates mean money is always moving back and forth between various parties. Hence, there are always trillions of dollars on the sidelines, in transaction settlements, at prime brokers or in trading accounts. I have yet to see a study that correlates all that cash in money market accounts with some accurate forecast of future market performance.

Anytime you are discussing what the economy or the market or a company or stock might do, it is on a go-forward basis. What already happened is history, and unless you are Marty McFly you can’t go backwards in time. What is happening live, in real time, hardly needs any prediction; it’s already too late. Pretty much all you are left with is the future. Saying “on a go forward basis” is useless and redundant.

9. “It is already in the price.” This is a tough one, because when used correctly, it is an accurate statement. The problem arises from its occasional incorrect usage.

Thank Nobel laureate Eugene Fama. He eloquently explained how prices incorporate all known information in his efficient market hypothesis. Price reflects the sum total of this known information, manifest in the decisions buyers and sellers have collectively made.

But genuinely new and unknown information is not in the price. A sudden surge or sell off of stocks occurs when that new information gets reflected in new prices. When that happens, it obviously was not already in the price.

10. “110%” (Alternatively, “1000%”). This phrase isn’t limited to the world of finance. It’s often used in the world of sports and a lot of other places. The maximum anyone can ever give, or feel, or believe, or whatever, is 100%. Anything over that is a mathematically impossible embellishment.

Either its 100%, or it’s a nonsense number that is less than an infinite amount of even bigger numbers, a hyperbole-fail. Unless you give an infinite percentage, which is either impossible, or the same exact thing as 100%.

Those are my most useless phrases in finance. What are yours?

1. Prices might go higher eventually, but many traders are paid based on their profitability (“P&L”). When huge gains accrue over a short period of time – like the March to August 2020 period – some traders lock in those gains, guaranteeing their quarterly or annual bonus for the year.

I originally published this at Bloomberg, September 23, 2020. All of my Bloomberg columns can be found here and here. 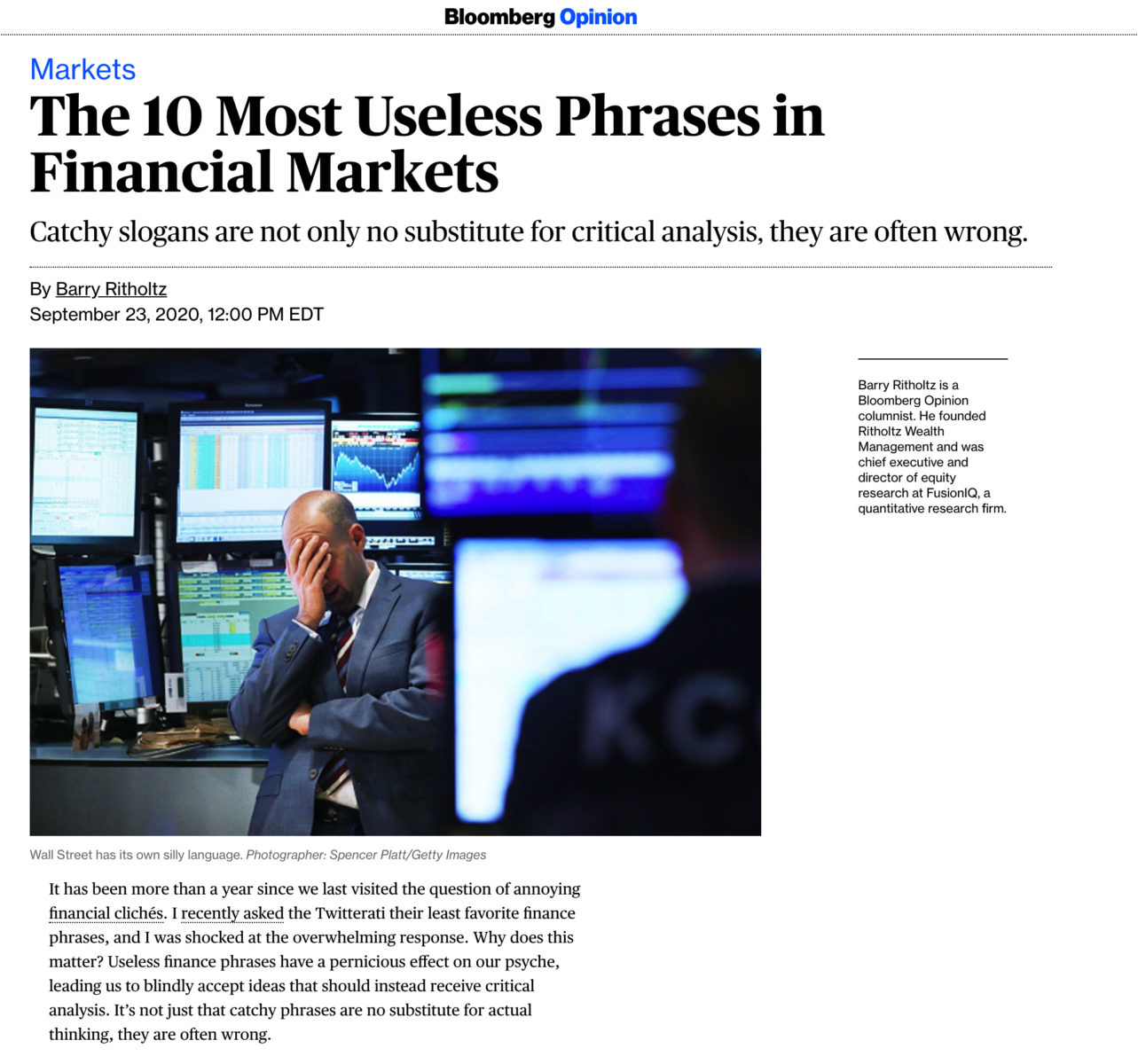