The Economy Is Finally Coming Through for U.S. Workers
Decent wage gains are showing up in paychecks. That should continue for a while.
Bloomberg, January 7, 2019.

Last week, I discussed the things I got wrong in 2018. Today, I want to point out one that I got very right: rising wages.

After two years of workers seeing modestly bigger paychecks, it looks like we are now in that part of the business cycle when steady and large gains show up. More evidence for this could be found in the jobs report from the Bureau of Labor Statistics on Friday. Workers had an average gain in hourly wages of 3.2 percent in December, well above the average of 2.4 percent during the past five years, as the chart below shows. More gains probably are on the way. 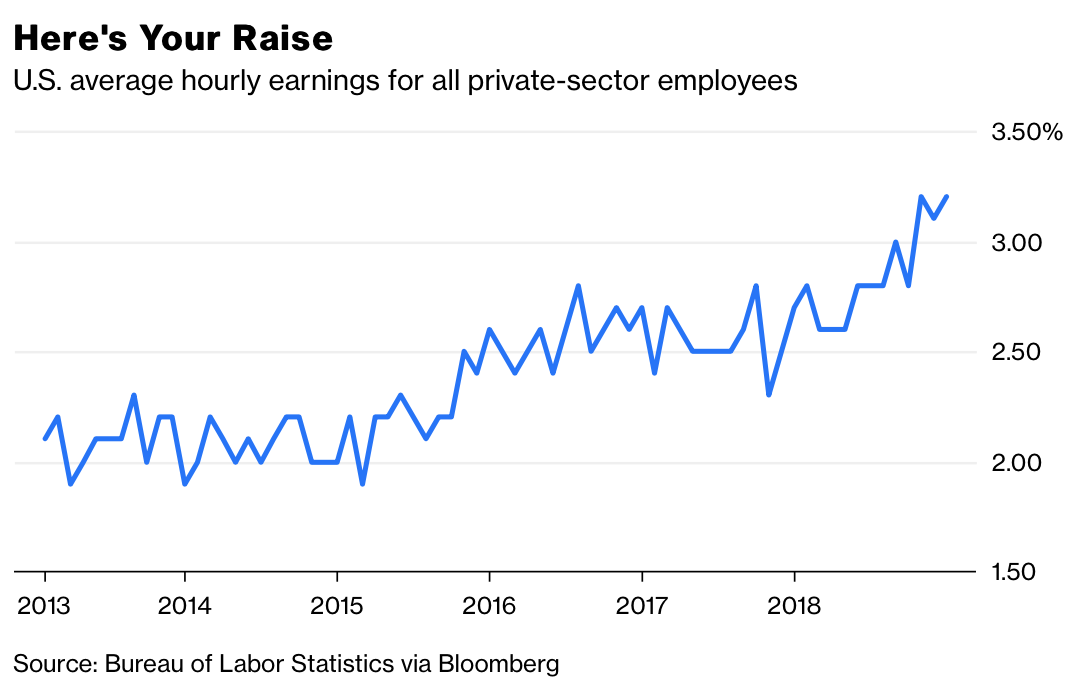 Why wages have been rising, and why the trend is likely to persist, isn’t much of a mystery. Here are the primary reasons:

This year, there will be even more regions with higher paychecks — 19 states, plus 21 cities and counties, are raising pay floors.1 Some of these wage increases are the result of scheduled, incremental increases set by states in earlier years. A few states had ballot initiatives that voters approved to raise wages. And 17 states have their minimum wages indexed to inflation, 2  meaning an annual increase will occur automatically following any year when the consumer price index (CPI) rises. Meanwhile, New York City was the first locale to set a minimum wage for Uber and Lyft drivers.

Competition for workers: Even without minimum-wage legislation, companies are aggressively competing for workers. To do so, they are raising pay for starting workers. This often leads to workers with more seniority seeing increases as well.

Costco raised its minimum to $14 an hour; Target went to $12 and Walmart to $11. 3 Disney reached a deal with its unions for a $15 an hour minimum wage at Disneyland in California for this year, though that higher rate won’t reach Disney World Florida until 2021.

But it was Amazon that made headlines in October when it said it was raising its hourly minimum for all U.S. workers to $15. The move affected 250,000 employees, plus 100,000 seasonal holiday workers.

Job-openings ratio: In 2009, there were 6.6 job seekers for each opening. Today, there is less than one person looking for work for each opening, meaning there are more vacant positions than there are job seekers. The law of supply and demand states when a service is in limited supply — in this case labor — then the cost — wages — should rise.

Getting off the sidelines: As we noted last year, companies need:

To find ways — again with higher pay and the like — to bring those who have left the labor force back into the fold. This latter option may be the more intriguing: The labor force participation rate of 62.7 percent of working-age Americans is at lows not seen since the late 1970s, but for the past couple of years has shown signs of bottoming.

That seems to be happening now. The most recent BLS report saw the unemployment rate rise to 3.9 percent from 3.7 percent — but not because people were being fired. Instead, about 260,000 people, probably a good number of whom had abandoned the job market, entered the labor pool. And the labor force participation rate of 63.1 matches the highest rate in the past five years, as the chart below shows. Higher salaries probably are the main reason for this. 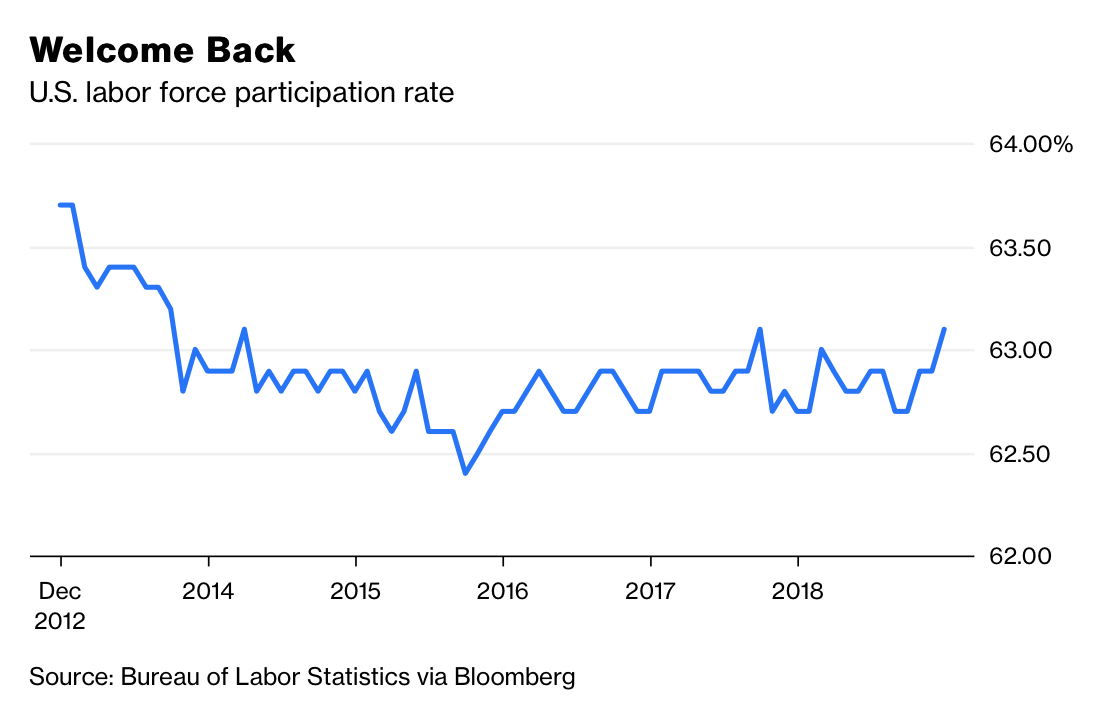 Finally, let me beat any unreformed supply-siders to the punch on one final topic: There is little or no evidence that the Tax Cuts and Jobs Act of 2017 had much of an impact on wages — and certainly workers haven’t seen the absurd $4,000 per employee windfall President Donald Trump’s economic advisers and political allies made before the tax cut was passed by Congress. As my Bloomberg Opinion colleague Noah Smith observed, there are no signs that tax cuts are trickling down to workers’ real wages. This isn’t a surprise, since the tax cut was geared to give companies and the wealthy the most of the breaks.

The economic benefits of increased wages are well understood: real estate, travel, durable goods, retail sales will likely rise, leading to commensurately higher corporate profits. We might even see increased savings for retirement and paying down debt. All of this adds up to higher living standards for Americans.

And yet, there are some negatives. Labor is a corporate expense, and rising wages might put pressure on profits in some industries. Perhaps the biggest impact is on inflation. That’s something the Federal Reserve must grapple with. Although there are few signs of a serious uptick in inflation, the Fed is committed to making sure it doesn’t rise faster than it would like. Those higher rates will raise borrowing costs, thus creating a potential headwind for the stock market. As we’ve seen in the past few weeks amid wild swings in the major market indexes, traders and investors are trying to anticipate how much of drag higher rates will pose.

In the meantime, everyone should be pleased that workers are finally getting some decent raises.

3. It is challenging to make head-to-head comparisons due to regional variations in pay scales.

I originally published this at Bloomberg, January 7, 2019.. All of my Bloomberg columns can be found here and here.