Hedge Funds Keep Failing to Deliver on What They’re Selling
They neither outperform in bull markets nor offer insurance against bear retreats.
Bloomberg, April 25, 2019

The stark underperformance of hedge funds and others in the alternative-investments business since the end of the financial crisis has been a long-running mystery. Or as Worth so starkly put it, “What the Hell Happened to Hedge Funds?”

Perhaps the most compelling theory for underperformance has been the long steady gains in markets since the financial crisis. Some credit — or blame — the Federal Reserve’s dual policies of quantitative easing and zero-interest rates with creating a low volatility environment. That combination, goes this argument, has worked mightily against hedge funds. There’s little need for a hedge in this sort of manipulated and remarkably calm bull market, is the complaint from numerous underperforming managers.

Once things normalize, the argument went, it would be a different game. The return of volatility would give hedge funds the opportunity to resume the outperformance of their glory days. Much more attractive numbers were inevitable.

But all the things that were supposed to help hedge have come to pass, and then some.

The Fed announced the end of its quantitative easing program in 2014; the zero-interest-rate policy ended with a series of rate hikes starting in December 2015, and rates now stand at 2.25-2.50 percent.

Then volatility made a huge comeback. First there was the unwinding in early 2018 of bets that volatility would stay low, which sent the CBOE Volatility Index — or the VIX, sometimes known as the market’s fear index — spiking. That was followed later in the year by wild swing in the Standard & Poor’s 500 Index, which fell 20 percent from its late September peak to its late December low; it has since recovered all of that decline and more. Indeed, both the Nasdaq and the S&P 500 notched new all-time highs Tuesday.

This should have been a time for hedge funds to shine, with all of the financial heavenly bodies coming into alignment. QE and zero- interest rates, two pillars of the bull market, were history; volatility was back; and who knew what was going on with U.S. trade policy. This was a perfect opportunity for hedge-fund managers to exploit those wild swings. While a few stellar funds did indeed do well, most of the rank-and-file failed to take advantage of those ups and downs.

As the chart below shows, the main categories of hedge funds have been lagging behind the market in 2019. The S&P 500 is up about 20 percent from its December lows, and up 17 percent year-to-date. The Nasdaq, home to many hot tech stocks, has seen even better gains of more than 22 percent. During that same period, the Barclay Hedge Fund Index is up 5.6 percent through the end of March.1

The Worst Year Ever for Hedge Funds? 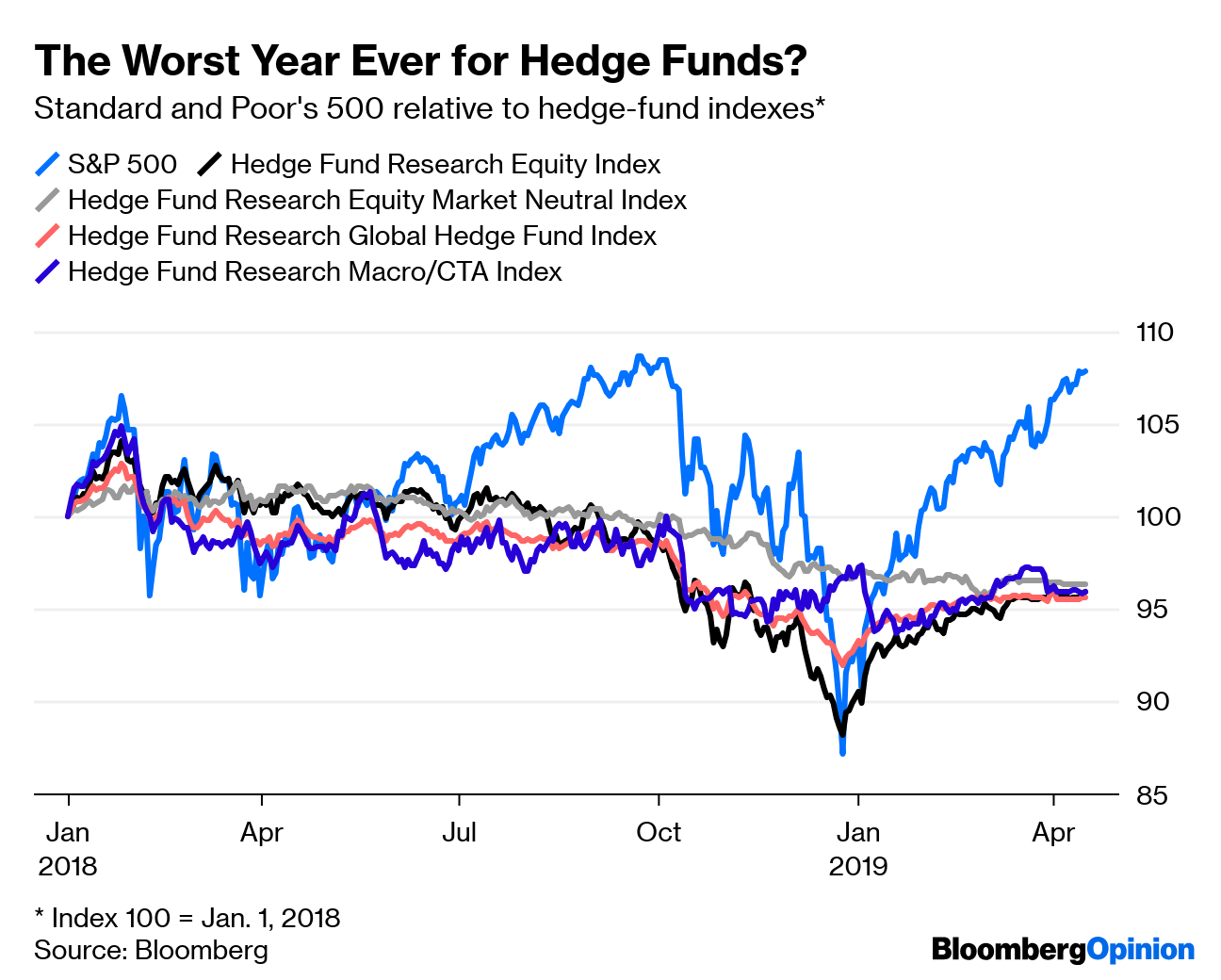 Somehow, these market conditions did little or nothing for hedge-fund performance. Instead, the failure to capitalize on volatility worked to thoroughly debunk the claim that market calm, thanks to the Fed’s machinations, were to blame for the poor performance.

It gets worse: Last year, the industry saw its biggest annual loss since 2011, declining 4.1 percent on a fund-weighted basis, according to Bloomberg News. Institutional Investor noted the response by investors was a net withdrawal of $6.5 billion from macro hedge funds in the first quarter, more than half as much as the $12.3 billion in outflows in all of 2018. That’s a drop in the bucket relative to the $2.9 trillion in assets in hedge funds, but still a worrisome sign.

As bad as last year was for funds, Jim Bianco, who runs an eponymously named research firm, believes that 2019 might be the worst year yet for hedge-fund performance. In an email exchange, Bianco noted “Hedge funds have two problems. One is groupthink. They separate themselves in places like Greenwich or the Hamptons and talk to each other. The other is their high fees (even if they are coming down) so that any alpha they can generate is eaten up in paying the manager.”

Given all of this, it is a wonder why so many investors continue to stay in hedge funds. My Bloomberg Opinion colleague Nir Kaissir posits two theories: the first is that institutional investors have fallen prey to inertia. The second is the ugly possibility that high-net-worth individuals are “incorrigible gamblers.”

I suspect fear is a third aspect at play here. Lots of investors blithely headed into the 2008 financial crisis fully exposed, or even leveraged. Many were unhedged. Given the post-traumatic stress disorder the losses from that event inflicted, lots of investors may be reluctant to give up what is supposed to be their financial-collapse insurance. The sentiment from hedge-fund investors seems to be along the lines of this: The moment I move my money from hedge funds to indexes will be exactly when I will need that downside protection.

The problem with this approach is that the downside protection looks like it’s illusory.

1. The Barclay Hedge Fund Index releases monthly data; I was unable to locate trough to peak numbers for BHFI.

~~~
I originally published this at Bloomberg, April 25, 2019. All of my Bloomberg columns can be found here and here.