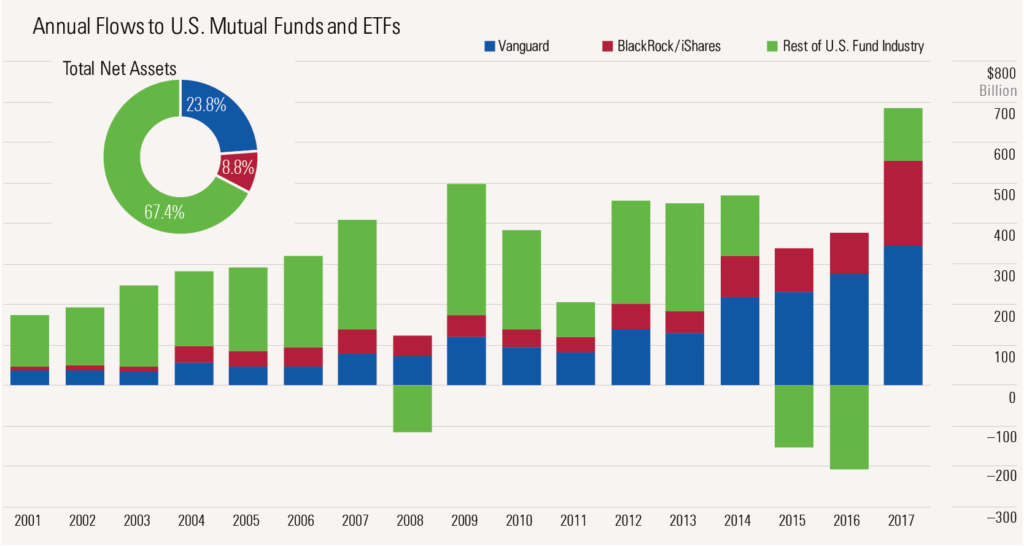 The question that I have been getting a lot this year is this: “Why do you spend so much time writing about Vanguard?”

I heard it after I wrote several columns and posts this Spring that referenced the investing giant. The past few months saw Vanguard and Blackrock come up repeatedly in the news. The Vanguard patent on ETF share class; this column about a foolish anti-index legal theory, and this related post are recent examples; Even this discussion  on survivorship bias has a Vanguard study on mutual fund reference within it.

Its not just me, there has been so much coverage it has led to a bit of a pseudo-contrarian backlash — e.g., that indexing is now a bubble and that active management is overdue to reassert itself

But all of the sturm und drang fails to conceal the real reason for concern: Inexpensive Passive funds are taking big market share — and therefore revenue and profits — away from expensive active. You can see it in the fund flows, and especially in the total assets under management.

This Bloomberg headline from last week really captured the essence of this shift: End of Era: Passive Equity Funds Surpass Active in Epic Shift. (The WSJ also discusses it today Index Funds Are the New Kings of Wall Street).

Regardless, this has been a long time coming. My pet thesis on why is simple: From the 1990s forward, Main Street investors have endured a series of setbacks, insults and outright theft that soured them on both active management and all of traditional Wall Street. There were the accounting frauds, the analysts scandals, the IPO schemes, the mutual fund trading scam; the Arbitration fraud perpetuated by the incredibly corrupt NASD-R (now morphed into FINRA); the dot com collapse, the GFC, the sub-prime debacle, housing bubble + real estate collapse, commodities bust, etc.

But it was the financial crisis that was the last straw: No one on Wall Street was held responsible, no one went to jail, or got punished. Instead, they were bailed out with taxpayer monies and got to keep billions in bonuses and stock options.

Mom & Pop figured out this was a giant grift. So they took their ball and went home, and by ball I mean money and by home I mean Malvern, Pennsylvania.

The impact has been enormous: more than merely active to passive, its been a migration from expensive to cheap, from Broker/Dealer to RIA, from Suitability to Fiduciary. It has been an expensive lesson for Wall Street to learn, one it has not fully internalized, as it still fights tooth and nail to maintain its grip on investors’ choices.

Regardless, this tectonic shift continues to play out in a geological time frame. Sure, you can say indexing is Marxist, or is nonprofit or Socialist, say it is a bubble, that is soon to burst, or is dangerous to the economy, or whatever bullshit your PR people tell you. But whatever you do, for God’s sake don’t adapt to what customers actually want and what is obviously in their own interest, because that might cost you market share and revenues. Never go there, it is a bridge too far for even the savviest Wall Street firm.

If you keep doing things exactly as you have, don’t be surprised at the results . . .

Tales of Indexing’s Slowdown Have Been Greatly Exaggerated (July 25, 2018)

Why Would Indexers Become Anti-Competitive Monopolists? (May 14, 2019)

The growth of ETFs has been driven by the massive shift to passive investing. The two biggest beneficiaries of this passive trend are Vanguard and BlackRock. Vanguard is known for its unique client-owned structure that mandates that all funds be run at cost. Because Vanguard doesn’t need to earn a profit on its funds, the company is very difficult to compete with. The only firm that has gone toe-to-toe with Vanguard is BlackRock, with its iShares lineup of ETFs. While iShares didn’t invent the ETF, it was the first firm to see the true potential of the vehicle. The early entry of iShares into the ETF market allowed the firm to build strong brand recognition and become known for its customer service and education materials.

These two successful firms are dominating the fund industry. In 2017, 81% of all new investor dollars went to Vanguard or BlackRock. Their low-cost lineups of index mutual funds and ETFs have become the default investment option for people switching out of high-cost, active funds. As you can see in the fund flows chart below, this trend seems to be strengthening as Vanguard and BlackRock gain a higher proportion of flows. Whereas, in the last three years, the rest of the industry is struggling just to get consistently positive flows.

As Vanguard and BlackRock get bigger, they can lower fees further and offer more services to investors. This only increases their competitive advantage.