A Healthy Consumer Means More Retail Disruption
Don’t expect shoppers to stick with the retail incumbents, whether on land or online.
Bloomberg, January 27, 2020

The most recent retail sales data provides a glimpse into the mind of the U.S. consumer.

The latest monthly retail sales report from the U.S. Census Bureau recorded December sales (excluding gasoline, automobiles and restaurants) of $384.6 billion. Compared with the prior year’s $ 360.5 billion, that’s a solid year-over-year gain of 6.7%. Sales in November 2019 were $330.2 billion for a 1.1% gain over 2018’s $325.9 billion. Average these two-monthly totals and you get a 4.1% year over year gain for the holiday-shopping period.

— consumer sentiment has fully recovered from the lows after the financial crisis and is back to levels that prevailed in mid-2000s;

— sentiment is still below the frothy dot-com peak of the late 1990s, suggesting that consumers are confident about the future but not in a reckless or unsustainable way;

— consumer debt relative to disposable income remains at the lowest level in at least four decades, indicating that there’s room for them to spend more: 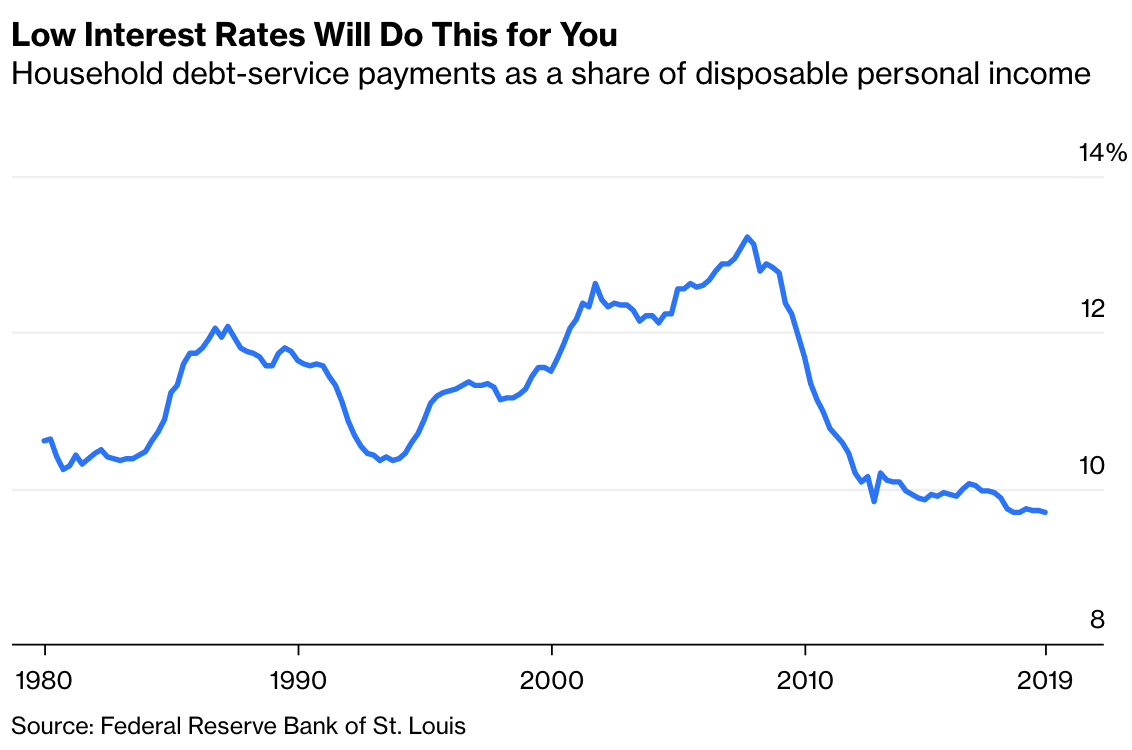 These three data points suggest that the next few quarters of gross domestic product growth, retail sales and durable goods orders are likely to be robust.

Two other interesting issues worth mentioning: Online sales measured by point-of-sale credit-card transactions from MasterCard’s SpendingPulse showed that e-commerce in 2019 reached all-time highs. E-commerce now accounts for 14% of U.S. retail sales and likely will continue to claim a growing piece of the pie. Worldwide, online sales have nearly tripled during the past five years from $1.3 trillion in 2014 to more than $3.5 trillion in 2019, according to Statista. Projections are for this to more than double during the next five years.

One surprise from the MasterCard data is that online shopping is accelerating, rising 18.8% last year compared with 2018’s 18.4%. There are few signs online retail is slowing. If anything, the generation that grew up online doesn’t think of e-commerce as anything special; it’s simply retail.

One other observation: Perhaps the most intriguing online retail outlet is Instagram’s Checkout. It was named 2019’s Technology of the Year by Mobile Marketer. Fashion site Glossy describes Instagram as the next big sales channel “for direct-to-consumer companies and traditional retailers alike.”

More than just promoting a brand or product, Instagram is facilitating the sale of products directly to consumers. The company takes its slice of the transaction. Combine this with the lethally accurate algorithms deployed by parent company Facebook Inc. and you can imagine the sort of sales growth that might lie ahead.

To give you an idea of the size of this marketplace, Instagram has more than 1 billion accounts active each month worldwide (Facebook has 2.45 billion active users). Most of them have some form of payment system, including credit cards, Venmo, PayPal or Apple Pay.

So far, Instagram Checkout has been rolled out slowly since the platform introduced it in March. It has been testing product tags in posts since 2016. Again according to Glossy, tags came to “Instagram Stories” about two years later. The fashion site, quoting Instagram, reports that 130 million people tap a product tag to shop or see a price every month.

Instagram is native to mobile, which is where the new generation of consumers spend most of their connected time. Although Instagram hasn’t made a big splash in online retailing yet, the potential is there.

To be sure, there are some inklings of problems with counterfeit goods. This has been an issue that has haunted both Amazon.com Inc. and eBay Inc. If Instagram wants to become a serious player in retail, it needs to nip this in the bud.

Disruption doesn’t sleep. Don’t be surprised if the incumbent stars of e-commerce — the leading members of the last generation of disruptive technologies — become the new victims of creative destruction.

The relative health of the American consumer makes the disruption all the more likely — and sooner rather than later.

I originally published this at Bloomberg, January 27, 2020. All of my Bloomberg columns can be found here and here.