The latest university endowment return data dribbling out for the fiscal year ended June 30 is not pretty.

Earlier return estimates of 8.7% for the Ivy League were too optimistic. Harvard’s endowment gained 6.5%, while Yale’s had an increase of just 5.7%; the University of Pennsylvania endowment gained 6.5%; Dartmouth yielded 7.5%; Brown, the smallest of the Ivy endowments at $4 billion, was a performance outlier at 12.4% (Princeton, Cornell and Columbia have yet to report UPDATE SEE BELOW). Other notable endowment returns include Massachusetts Institute of Technology at 8.8%, Stanford at 6.5% and Duke at 6.9%. 1

During the same time period, investors in the Standard & Poor’s 500 Index had total returns, which includes dividends, of 10.4%; a portfolio of 60% stocks and 40% bonds returned 9.9%. This underperformance is consistent with the record of the past decade, with none of the Ivy endowments beating a 60-40 portfolio in the 2008-2018 period, though a couple did come close.

The biggest contributors to the weak performance of endowments were high exposure to hedge funds (2019 returns = 1.1%) and natural resources (2019 returns = -6.8%), while many endowments’ high operating costs also acted as a drag on returns.

Many endowments have cut back their exposure to hedge funds, only to find a new object of affection: private equity. That seems to be an odd choice, given the similarly high cost structure, illiquidity and returns that may well lag behind the broader market.

There has been some notable skepticism about private equity’s accounting methodologies: Numerous analyses and studies have concluded that private equity overstates its returns by as much 50%. None other than Warren Buffett observed: “We have seen a number of proposals from private equity funds where the returns are really not calculated in a manner that I would regard as honest.”

Perhaps the most detailed critique of private equity comes from a former private equity analyst. Daniel Rasmussen, formerly of Bain Capital, now founding partner of Verdad Advisers, assembles his own empirical research and found that “private-equity returns are trailing public indexes,” with “far more volatility” than many big investors believe. Claims of improved efficiencies at private-equity takeover targets are “largely illusory,” he said. He warned that many investors are overpaying for private equity.

Furthermore, Rasmussen says that investors in private equity are much too optimistic:

94% of institutional investors expect private equity to outperform public markets; 23% expect PE to outperform by 4% per year or more. This is an astonishing degree of consensus from the most sophisticated investors in the world.  Great mispricings require highly correlated beliefs on the part of investors, and what we have today in private equity is the greatest of consensuses . . . But what’s even more frightening than the degree of consensus about returns is the lack of understanding of the risks.

In the same report, Rasmussen found other examples of groupthink:

If that sounds familiar, it is because it seems so similar to the dashed expectations of subprime mortgage investors.

If history feels like it’s repeating itself, it probably is. Endowments and pension funds were counting on higher  – and imaginary – returns of hedge funds to make up for the low returns on offer elsewhere. Financial consultants played no small part in that last round of magical thinking about hedge funds and no doubt have a similar role this time.

The only part that has yet to unfold is the probability that private equity turns out to be the next great asset class to disappoint.

University endowments and other big institutions have yet to learn that chasing the mirage of above-market returns more often than not leads to subpar performance.

1. Also noteworthy: Harvard Management Co.,which oversees more than $40 billion for the Harvard endowment, has been passed in size by University of Texas/Texas A&M Management Co., or UTIMCO.UTIMCO, including the “operating funds” it manages, has ballooned to more than $47 billion, thanks in large part to the giant oil reserves under its West Texas land grant.

I originally published this at Bloomberg, October 9, 2019. All of my Bloomberg columns can be found here and here. 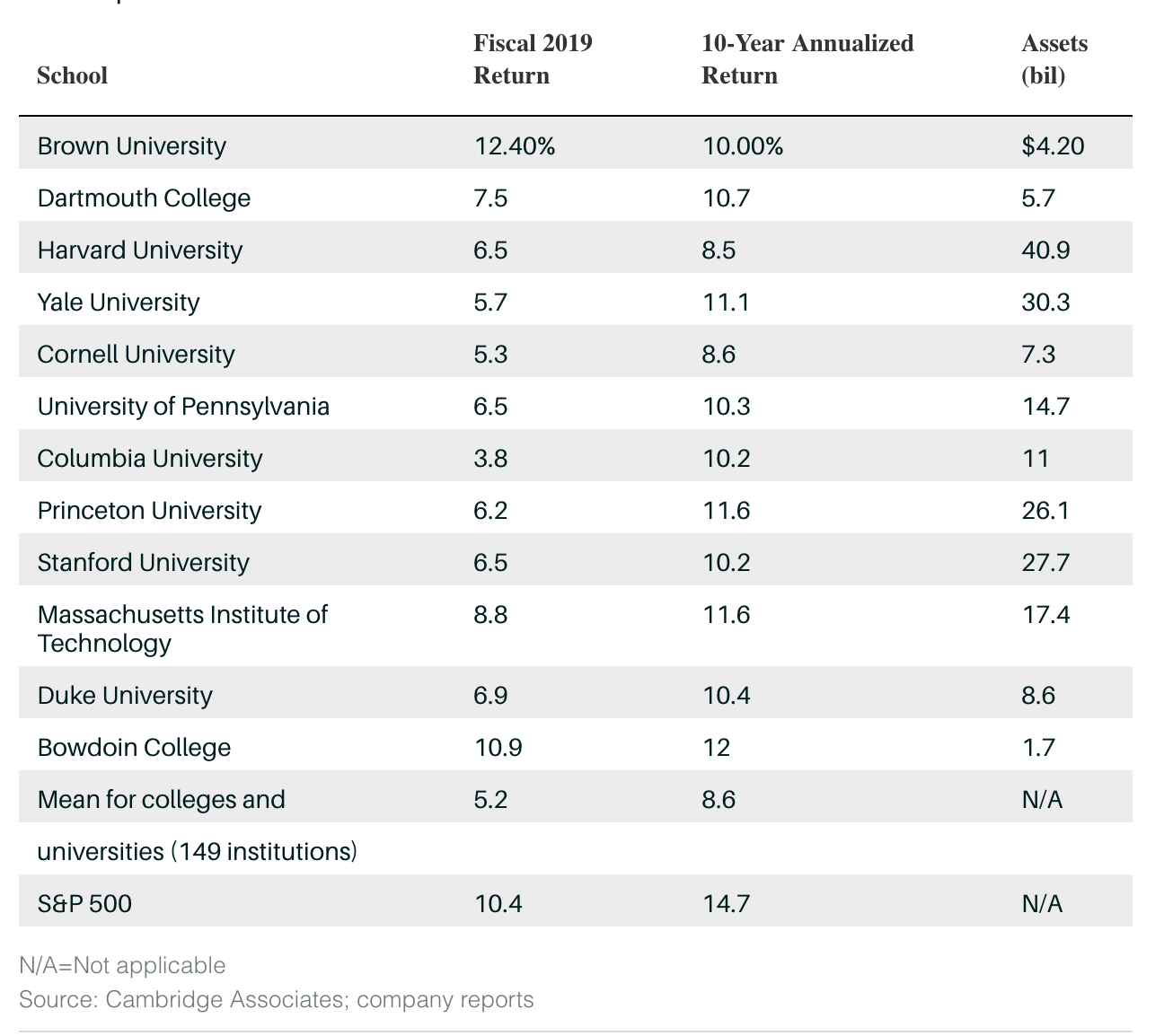